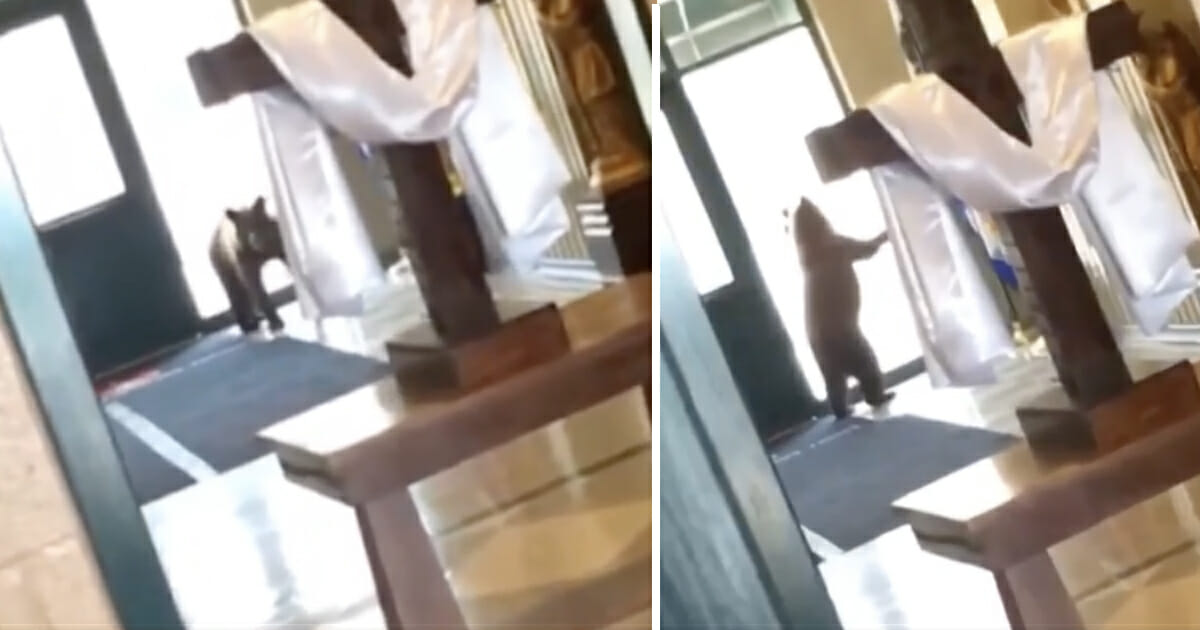 If you lived and went to school in a city, you were not very likely to encounter wildlife in your day-to-day, much less within the walls of your school itself. However, thousands of children in the United States live outside city limits–meaning that they can come face-to-face with a wild animal at any time!

Of course, it’s not uncommon to see deer, raccoons, foxes, and other animals like these. They roam around, seemingly unbothered by the human activity around them.

But there are rare cases, like the one seen in this video, that spark our interest and inspire awe.

In the video above, you can see a dark figure enter a building that’s presumably a church. That wouldn’t be wrong: it is, in fact, a young black bear that wandered into a Catholic school and who then got trapped inside!

Nothing to fear, though: the bear was safely tranquilized and released back into a wooded area away from homes and businesses.

Video was first posted on Facebook by Eureka, Missouri Community. It shows the male bear, which allegedly weighs about 90 pounds, trying to get out of Most Sacred Heart Parish in Eureka.

Luckily, at the time, no children were present at the school, and no one was hurt.

“The principal calls, kind of breathless: ‘There’s a bear in the school, there’s a bear in the school!” he told CBS affiliate KMOV. “Now we have all these security lock-down drills and all these facilities secure things, which we do very well — I thought she forget the safe word. I thought there was an intruder. She goes, ‘It’s really a bear.’ I go, ‘This is really awesome!’”

Officials attempted to lure the bear outside, but it wouldn’t budge. That’s when they decided to responsibly move him.

They say the bear looks to be about 18 months old, around the age at which mother bears push them out of the den to make room for new little ones. That’s why this bear is so adventurous!

This is a truly remarkable sight to behold. How would you react to seeing a bear inside a church or a school? Please share if you’re glad no one got hurt during this wild encounter!