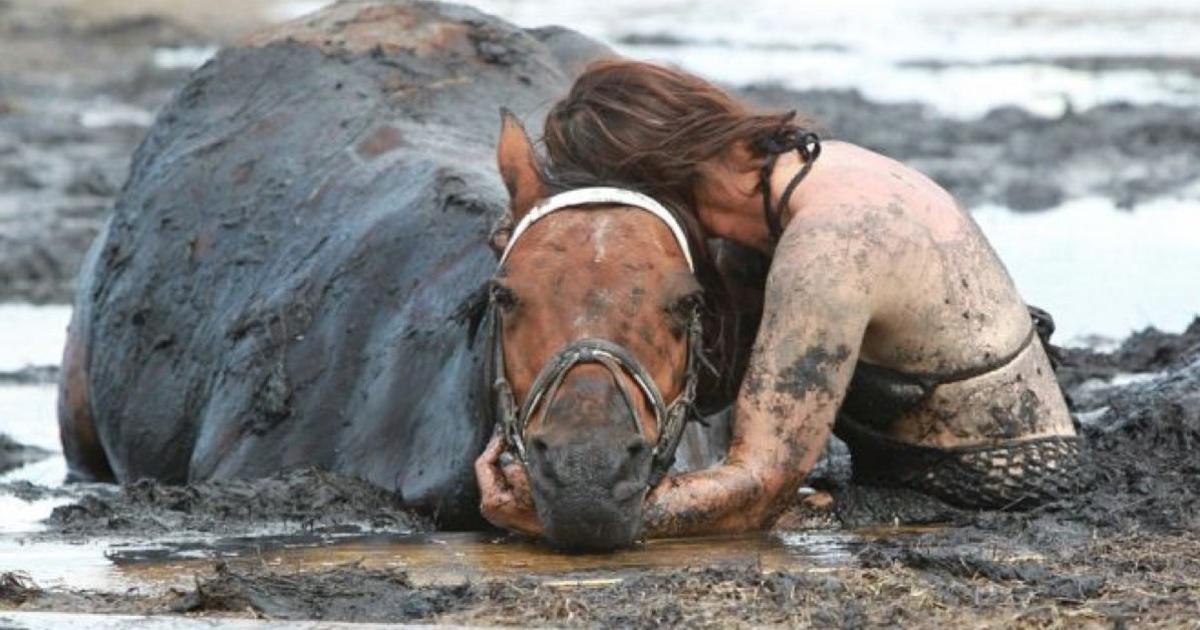 Anyone who’s ever been by the ocean knows that it can be unpredictable.

One thing you should never underestimate is the tide, because if you’re in the wrong place at the wrong time, it turn out badly.

The rising tide can surprise humans and animals and swallow them up in a short period of time. And in some cases, it can lead to a slow, cruel death.

This was what almost happened to a horse named Astro.

Nicole Graham and her daughter were horseback riding on a Sunday afternoon at a beach in Geerlong, Australia outside of Melbourne.

But after a while, the horses struck some soft terrain and the ground below them quickly turned into a muddy death trap.

Nicole helped her daughter and horse escape, but her own horse, Astro, was stuck in the mud.

Astro was soon neck deep in the mud and risked suffocating.

Nicole spent three hours by Astro’s side in a life or death battle.

Whenever Astro panicked even a little, he sunk deeper into the mud.

The more time passed, the more desperate the situation became. I don’t even want to think about what going on in Nicole’s head…

After three hours of strugglng, Astro was on the verge of not only suffocating, but dying of thirst and fatigue.

To make matters worse, the tide was on its way in.

Fortunately, Nicole’s daughter was able to get to solid ground and call for help.

Eventually, rescue workers and a veterinarian arrived on the scene to help.

It wasn’t going to be easy, so the rescue workers got started immediately.

In order to prevent Astro from wasting his energy and panicking more, the veterinarian injected him with a sedative.

Nicole stayed closed to her beloved horse the whole time and spoke calmly to him while he got his injection.

A helicopter arrived to lift Astro out of the mud, but the horse was stuck so deep in the mud that it was impossible to tie a rope around him to lift him up.

Astro was frightened and exhausted, and Nicole feared the worst. The tide was coming in and if they couldn’t get him out in time, Astro would drown.

The rescue team took one final, desperate measure: They started digging Astro out, but the ground below was too soft.

A rescue worker compared the clay to quicksand and didn’t think Astro’s chances of survival were good.

Then, a savior showed up on four wheels.

A local farmer on a tractor came to pull Astro out of the mud. It was a last resort, but worth a try.

Then, a miracle occurred — Nicole, the rescue workers, and the farmer managed to pull Astro out of the mud.

Check out the dramatic rescue here below:

Nicole has 10 horses and has never experienced anything like this before, even though she’s ridden horses on the beach countless times.

This story is a good reminder that it doesn’t hurt to be extra careful. But above all, it’s proof of that the bond between human and horse can cause miracles to happen!