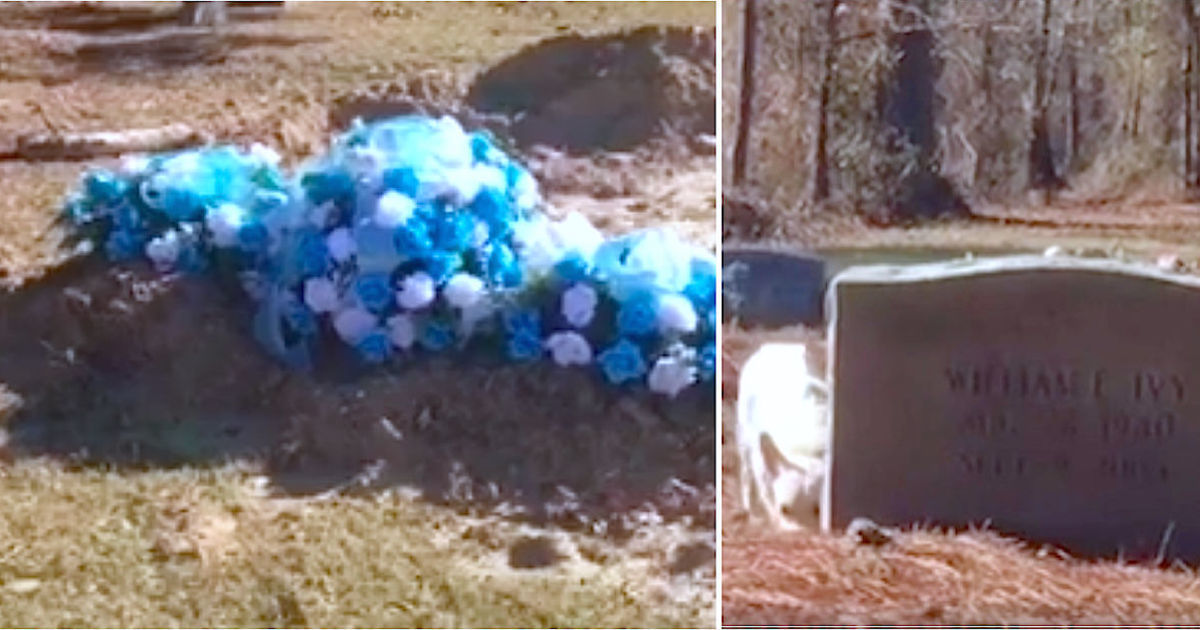 A few years ago, Alice Gill, who works at the Southern Pup Rescue & Retreat, came across a small and skinny white shepherd that was walking along the highway.

The dog looked like it was on the hunt for food, as it roamed near the trash cans close to a cemetery.

As Alice approached the dog, she could see that it was a female and that she was trying to stimulate her milk production. This indicated that she had puppies somewhere nearby.

The white dog, which Alice began to call ‘Mama Angel’, was covered in fleas and ticks.

When the dog saw Alice, she began to wag her tail, something she hadn’t done in a while.

Alice felt bad for the dog and wanted to take her home right there and then, but she also knew that if she did, the dog’s puppies would not survive.

They needed their mommy.

Alice hurried home on her own instead, to fetch the right medicine and equipment to remove the ticks and fleas from the dog.

She returned to the cemetery where she had last seen ‘Mama Angel’, and found her there with a male companion — possibly the father of her puppies.

Alice treated both run-down dogs and fed them. She then went to a nearby house to see if anyone might have any more information about the two stray dogs.

She met a stranger named Carl nearby, who told Alice that the dogs’ owner, an older woman named Ms. Carey, had passed away just a few weeks earlier.

She had died just before ‘Mama Angel’ had given birth to her pups. Ms. Carey was buried in the cemetery, under a giant bouquet of blue roses.

Then Carl told Alice something beautiful and heartbreaking. ‘Mama Angel’ had been going to the grave of her previous owner every day, in the hope that Ms. Carey would one day return.

But when it came to the pups, strangely, no one in the village knew where they were. Carl told Alice to check with Ms. Carey’s nephew who helped feed the dogs from time to time.

And so, Alice did. The nephew agreed to let Alice into Ms. Carey’s old house as an attempt to help find the puppies.

But the puppies were nowhere to be found.

A few hours later, Alice decided to head home and offered Carl a ride. Just as they began to drive off, Carl started shouting “There she is now.” It was ‘Mama Angel’ walking right on the road.

“She cut through the pasture to get away from the car, not realizing it was us. I stopped the car and asked Carl, ‘Carl, you a praying man?’ ‘Yes ma’am.’ ‘Will you pray with me?’ ‘Sure will.’

“And so two strangers, far removed in every way, closed our eyes together and asked for God to lead us to help this family in honor of Ms. Carey. We pulled out, back down the road, stopping periodically so as not to concern the mother.”

Suddenly they spotted the mama dog slipping under an old shed. Minutes later, three small puppies crawled out of the same shed — they were clearly hungry and happy to see their mom.

At last, Alice found the missing puppies and was able to make sure the entire family was safe.

The puppies, who were named Jaclyn, Kate and Farrah, and their parents were all later adopted by lovely new owners.

Thank goodness there was a happy ending to this story!

Please watch the video of the dog family below.

Along the country highway stood a young, emaciated, white shepherd mix, scavenging for food beside a cemetery. I had to…

If you love dogs as much as we do, please consider sharing this lovely story with all your friends on facebook!