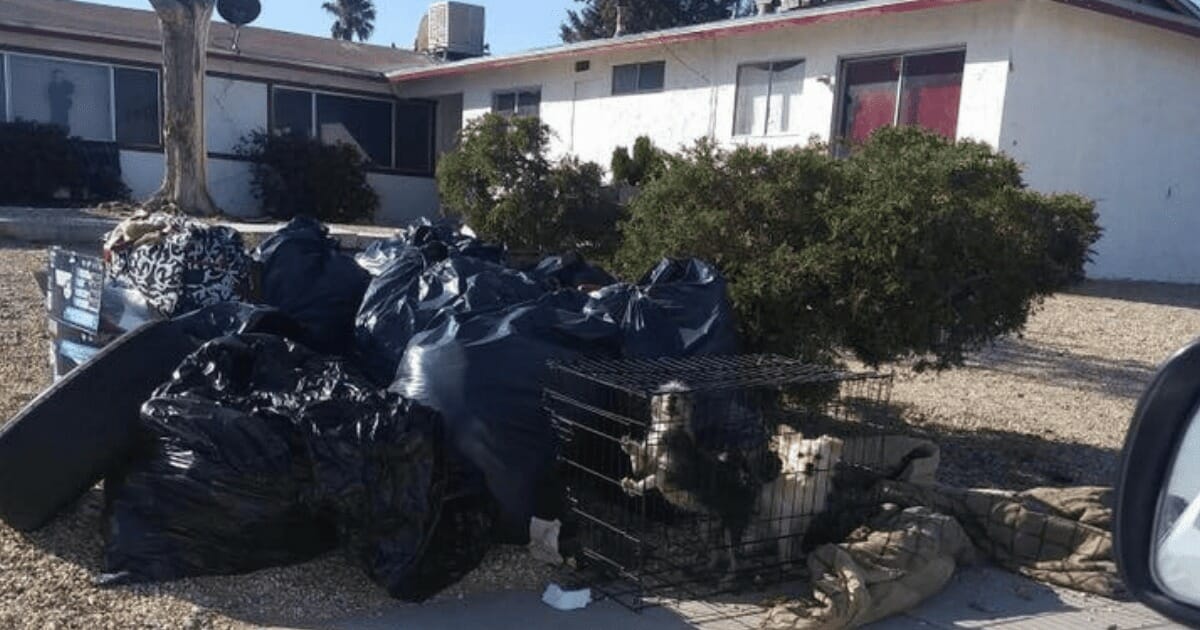 Despite the ongoing battle against animal cruelty – sadly one that never looks like ending – people continue to find ever inventive ways of surprising us when it comes to cruelty.

A family from Barstow, California, were recently evicted from their home in San Bernadino, and so left heaps of trash on the sidewalk to be picked up on the Friday morning.

Only, amongst the mounds of black bags stuffed with things they no longer wanted, was a large cage. In the cage? The family’s two dogs …

That’s right, these two souls were, in the eyes of the family, the same as trash. It was perfectly acceptable to leave them behind along with the other things they didn’t want anymore. They clearly didn’t even have the decency to drop them off at a shelter.

“These people were evicted and they are the ones that left them outside not [the] landlord just to be clear. They had been loading up their stuff all day since yesterday,” Angelina Trujuillo-Vargas, who found them, wrote on her Facebook.

To make matters worse, the dogs were in a bad way. One of them, Treasure, had fur so matted that she couldn’t move without being in constant pain.

“Catch is coughing, so we’ll need to wait until that clears a bit before we can neuter and bathe him. Treasure is all matted, she will get grooming and spayed tomorrow,” the rescue organization wrote in a post.

People were understandably distressed upon hearing the story of the dogs, though the worst is certainly behind them.

Whilst Treasure is reportedly now nearly fully recovered, the shelter says Catch – who is extremely protective of his sister – is going to need a little bit more time to come to terms with the situation.

No dogs should ever have to be left on the side of the road like they don’t even matter.

Share this story to show your support for all the dogs still suffering in the world.