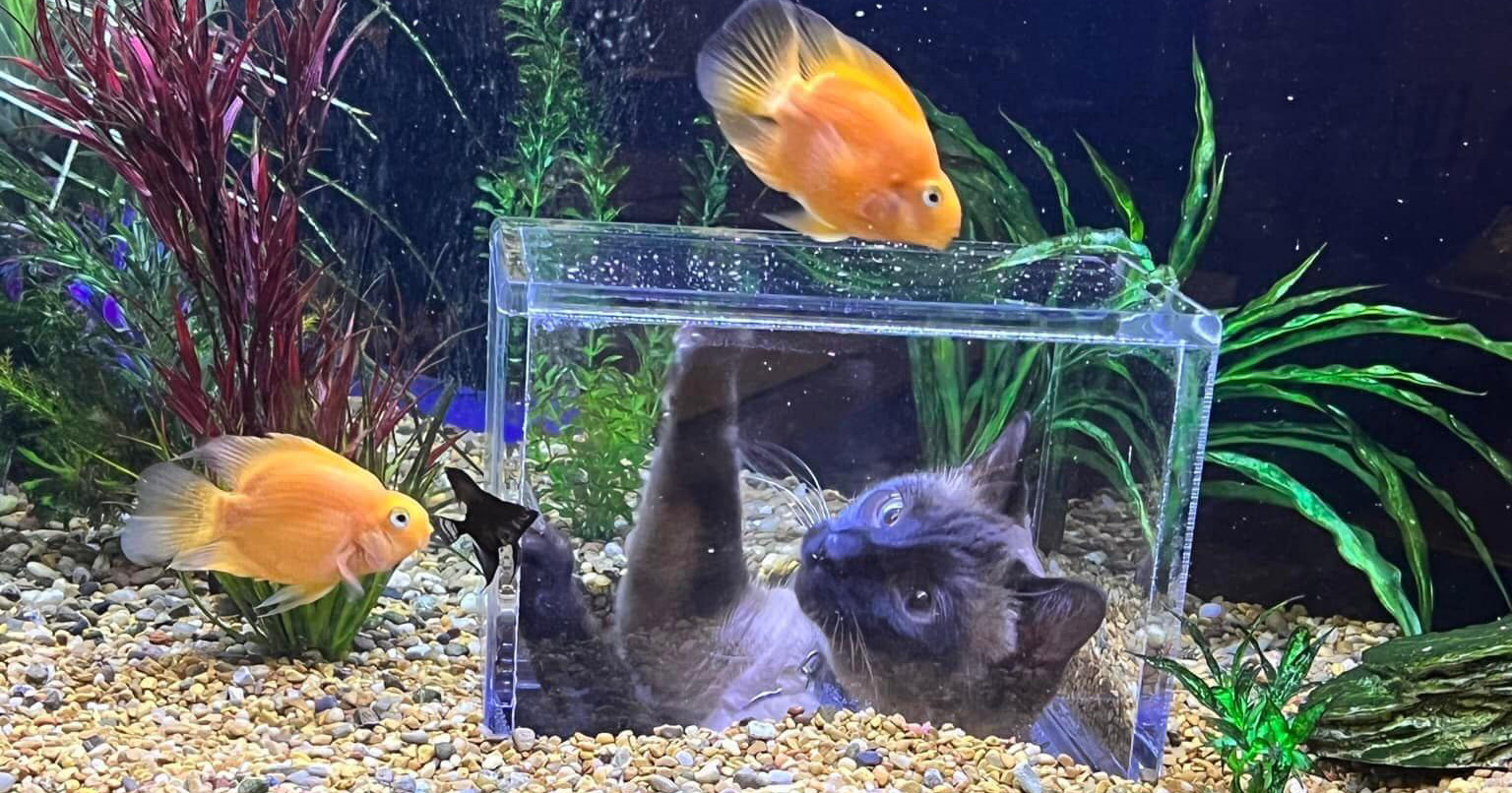 It’s amazing the things people do for their pets. We love seeing stories of people going out of their way to make their pets happy, especially in creative and unusual ways.

Like one family, who ordered a specially-made fish tank… all so their pet cat could get a better look at the fish!

Melissa Krieger, from Cincinnati, is the owner of four cats who have always been fascinated by her fish aquarium. “They would all sit and watch fish from time to time,” Melissa told Bored Panda.

Her cat Jasper was especially fond of watching the fish swim by. So, the owners came up with a very unique idea to get a new, custom tank so the cats could watch the fish up close.

Melissa envisioned a tank where the cats could stick their heads up from above. “I thought it’d be funny to make something like at the children’s aquariums where you stick your head up – that was the inspiration,” she told Daily Mail.

After pitching her idea to a local store called Aquatics & Exotics, they built a custom-made aquarium, complete with a special viewing space for the cats.

The cats didn’t know what to make of it at first, and it took a few weeks for them to start using it. But when Jasper discovered he could stick his head up from the bottom to view the fish up-close, the cats quickly became hooked.

“His eyes just got huge when he looked up and saw the parrotfish and they were staring back at him. That’s what made him want to go inside it more,” Melissa said. “it’s great to see they love it.”

The very unique aquarium went viral online, with thousands of viewers loving the cats’ reactions as the watched the fish.

According to Daily Mail, Melissa spent $2,500 on the 125-gallon tank, but she says it was well worth it.

“It’s great to see him so happy because you’ve got to stimulate their brains. It’s definitely been worth the money,” Melissa said. “You spend that much on a TV and this is like a TV for cats. As soon as we feed the fish, [Jasper] comes running.”

Some people had concerns about whether the cats could be upsetting the fish, but Melissa says it hasn’t been an issue — mostly because the fish are already used to them staring.

“They don’t seem to be bothered by him. Some of those fish are older than Jasper,” Melissa told Bored Panda. “We have had a fish tank there for 15 years.”

“I really believe they either enjoy it or don’t care at all. This interaction has been going on for years. The fishes, especially the parrots (big orange ones), are very social with all our cats.”

What a unique idea! The things people do for their pets 😸 These cats seem to be having a great time watching the fish!