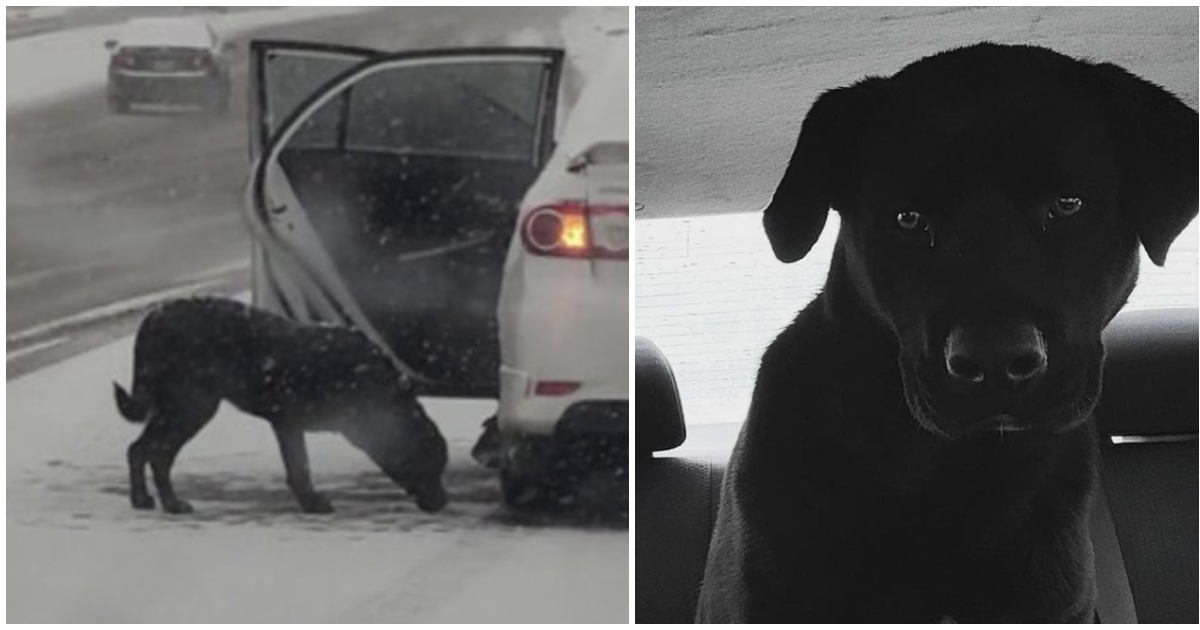 It’s been a harsh winter lately, with temperatures dropping to historic lows even in states like Texas.

The weather has strained the state’s power grid and countless people have been affected by loss of electricity and heat. And sadly, the weather has also affected animals, from a dozen primates dying from a blackout to pets left out in the cold.

But luckily, there has also people stepping up to help animals during this difficult time, like one woman who helped a stray dog… with the help of her groceries.

During a freezing cold day in San Antonio, a woman named Kristin Salinas-Labrador was on the way home from work when she spotted a stray black lab on the side of the road, WOAI reported.

Kristin and her wife, Nicole, are no stranger to rescuing dogs, and they knew that it would be dangerous for this dog to be out on his own during the freeze.

“As soon as we see a stray, either if it’s a dog or a cat, we bring it in and try to adopt it out,” Nicole Salinas-Labrador told NBC News. “So it was just another day, but we had never been through this snow like this, so we knew we needed to definitely bring this dog.”

Unfortunately, the dog was scared and hesitant to be rescued, so Kristin had to find a way to gain his trust. And since the best way to someone’s heart is through their stomach, Kristin used the food she happened to have on her: a pack of tortillas she had just purchased.

Tearing the tortillas into pieces, she was able to gain the dog’s trust and coax him into the safety of her car.

Kristin brought the dog home, and after luring him with tortillas, they decided to name him “Taco.”

Luckily, he was in good hands. According to NBC News, Nicole is a lead technician at a local vet, and she was able to get him vaccinated and microchipped.

However, they couldn’t identify any owner of the dog. And because Kristin and Nicole already have several rescue dogs of their own, they can’t adopt Taco for good.

Instead, Taco will be put up for adoption. While he’s looking, he’ll continue to have a place to stay with Kristin and Nicole, although they don’t think it’ll be long before the now-famous Taco finds a forever home.

“I have people left and right that say they want this dog. That they want the ‘tortilla dog!'” Nicole said.

People often forget how much harsh winter weather can be a danger to dogs, and even during extreme weather events like this most people don’t think about the strays.

So saving this dog is a good deed that definitely stands out — and Kristin hopes it will inspire others to do the same.

We’re so glad Taco is safe, and hope he finds a great forever home soon! Share this inspiring story!