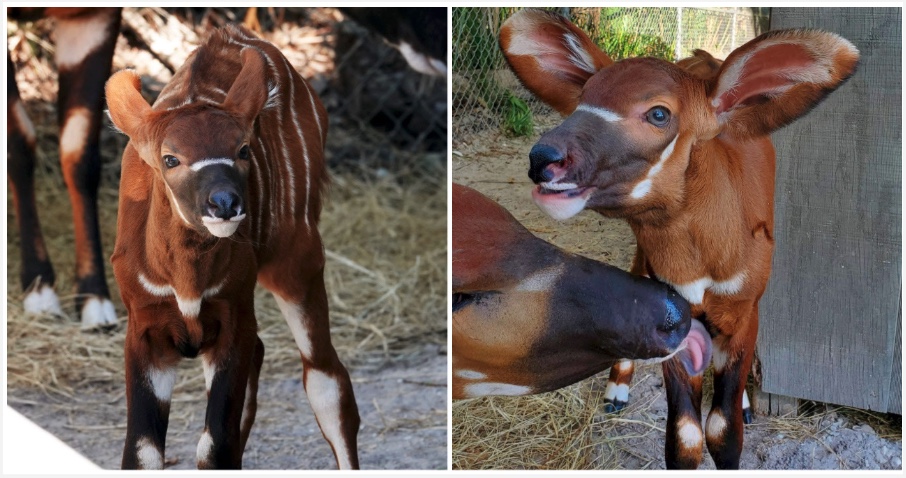 It’s always a happy day at a zoo when one of their animals gives birth, a newborn baby animal becoming part of the family.

But it’s especially exciting when that animal is endangered. Every new birth is a step towards repopulation, a hope for the future.

Which is why the Naples Zoo, in Florida, is celebrating their first new birth of 2021: an adorable Eastern bongo calf.

The Eastern bongo is a member of the antelope family. They are native to the mountainous forests of Kenya, but hunting and habitat loss due to deforestation has led to them being classified as critically endangered. Only about 70-80 currently live in the wild.

The baby calf was born at the zoo on January 17, and she currently stands 2 feet tall and weighs 46 pounds, according to Naples Zoo.

The newborn is the third calf born to a bongo named Amara, but she is the zoo’s first female bongo baby.

The Naples Zoo is part of an accredited program to help repopulate the bongo population.

In a press release, they explain that Amara and her mate were matched up by the Species Survival Plan, “to create the greatest genetic diversity in the population over the next century.”

“And in 2004, accredited zoos returned 18 bongos to the Mt. Kenya Wildlife Conservancy in Africa. Today, over 70 bongos now live on the Conservancy providing hopes for mountain bongo recovery through conservation translocations.”

The newborn bongo doesn’t have a name yet. Zoo staff examined her and found her to be in good health.

The zoo says that once the calf starts following her mother, she will be introduced to the exhibit for the public to see.

Hopefully the sight this adorable baby animal brings joy to visitors — and inspires them to support the renewal of this critically endangered species.

What a beautiful newborn! Congrats to everyone involved! Share this great news!