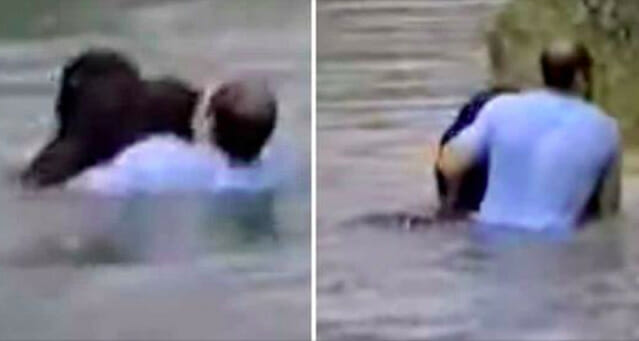 The first thing needs to be said before telling this story is that I think it’s wrong for animals to be locked in zoos simply for human entertainment and amusement.

Wild animals, such as chimpanzees for example, should live just there — in the wild. That is where they belong, not in a zoo where they are forced to move around in small, restricted areas. Of course, zoos may also be doing good things, such as preserving endangered species, giving them a decent life and ensuring that animals that had previously been abused be treated and recover.

In this story, a true animal hero completely ignores all warnings and jumps into a chimpanzee enclosure in a zoo, throwing himself in murky waters to save a drowning chimpanzee.

Since circulating many years ago, these images have stunned millions of people around the world — and it’s not difficult to understand why.

In 1990, chimpanzee Jo-Jo fell into an artificial lake in his enclosure at the Detroit Zoo after being chased by a more aggressive chimpanzee. Chimpanzees in fact cannot swim, so Jo-Jo was destined to a cruel fate.

Meanwhile, about a dozen visitors watched in horror as the poor chimpanzee began to drown.

One of the witnesses was truck driver Rick Swope, then 33 years old, who was visiting the zoo with his wife and three kids that day. But unlike the others, when he saw Jo-Jo desperately in need of help, he decided to act immediately.

He threw himself into the murky waters. He had to save the poor chimpanzee.

This, despite knowing that chimpanzees are extremely strong and potentially very aggressive and violent creatures. Any of the other chimpanzees in the enclosure could strike at any moment. But Rick never hesitated.

His family could only stand watching, terrified, as he jumped in — and finally managed to pull the 130 pound chimpanzee out.

Thankfully, Rick survives the ordeal — as does Jo-Jo thanks to his human hero.

“He looked at me. I think he knew what was happening,” Rick told Chicago Tribune.

Watch the full rescue in the video below: