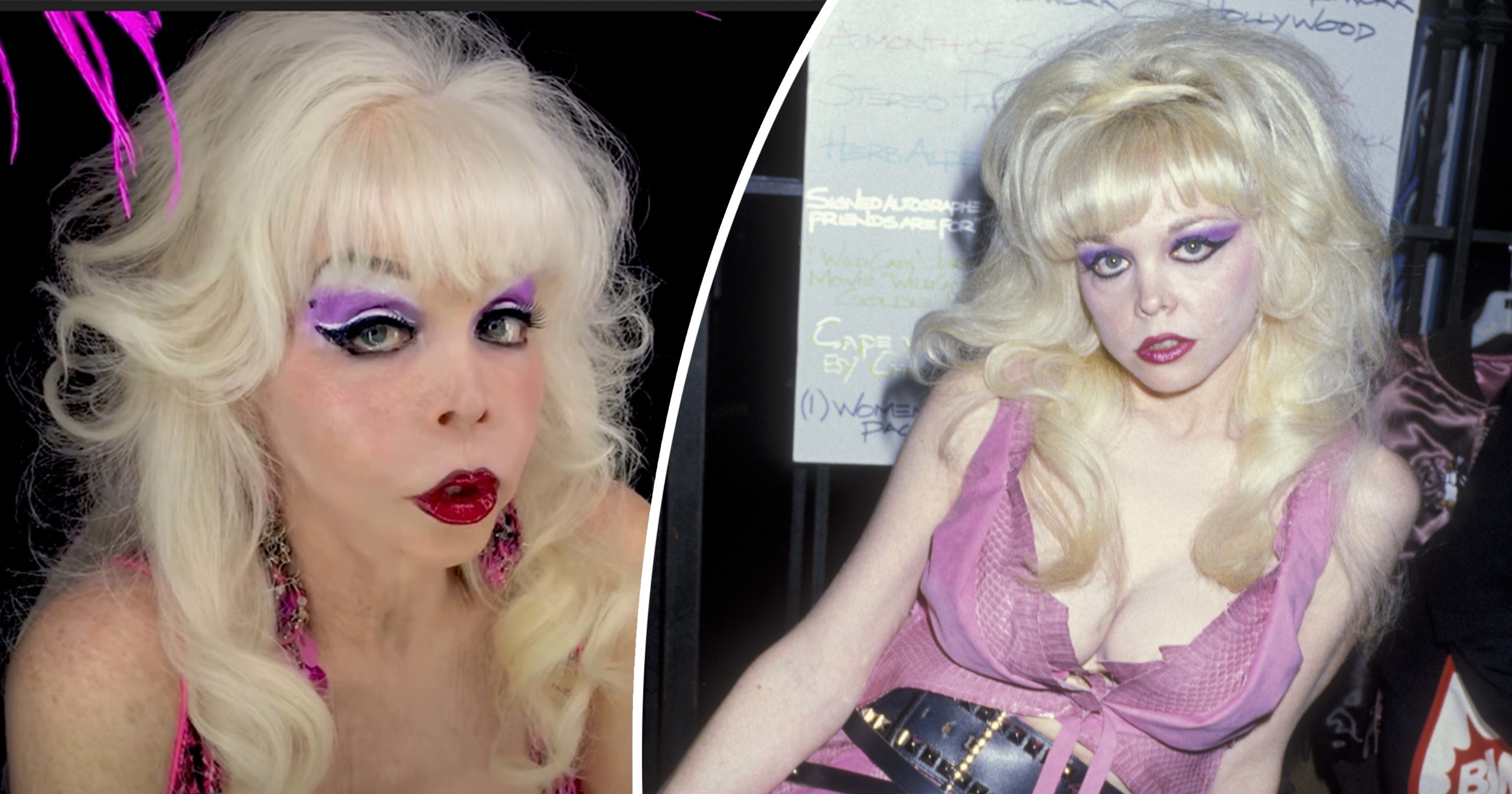 Los Angeles – and especially Hollywood – has long proven to be an extraordinary city, where many fight to find fame and riches.

Some make it, others don’t. Of course, there are many ways to reach stardom, and many more examples of people who have made themselves into legends.

One such individual is Angelyne, also known as the “Billboard Queen.”

The mysterious woman appeared on Billboards around the Los Angeles area in the 1980s, and quickly became a Los Angeles icon. That said, Angelyne’s life and career remain something of a mystery. For decades, a hunt for her real persona – and name, for that matter – was on.

Now, it seems like it’s finally come to an end.

This is all you need to know about the legendary “Billboard Queen,” Angelyne.

Many people dream of becoming celebrities. Aspiring singers, actors, dancers and performers all like to see bright lights in their future. The most likely place to achieve that vision? Hollywood.

Los Angeles is notorious for being the place where dreams come true. Conversely, “The City of Angels” can also be the site where dreams are abruptly smashed to pieces. The entertainment business is a tough one to navigate.

If you want to make it to the absolute top, extreme sacrifice is required, as well as blood, sweat, and tears. In short, one has to be prepared to do anything to give themselves the best possible chance. That said, a certain few have been able to attain fame through less conventional means …

In the 1980s, one woman found themselves on billboards all over the Los Angeles area. She was called the “bombshell billboard princess”, was often seen scantily clad, and always wore pink.

If you ever visited Los Angeles between the 1980s and the 2000s, chances are you’ve seen her face. Angelyne became a Los Angeles legend – though still to this day, very few know who she really is.

Her legends are many, including everything from dating Madonna to speaking with Marilyn Monroe through a medium.

So who is Angelyne really? And what does she look like today? Here’s all you need to know about the original “Billboard Queen” – who only marketed one thing: Herself.

In February 1984, a billboard in Los Angeles would change lives forever. On it was an attractive blonde woman, wearing pink and pouting while staring out across Sunset Boulevard.

Nothing more was needed for the woman in the picture, known as Angelyne, to cause a stir. It was an overnight explosion. But where did she even come from?

Well, the story concerning the legendary billboard woman is a complicated one. There are many different tales told about her – new ones spring up with each passing year.

On top of that, she’s never revealed her real name, choosing to go by Angelyne and nothing else. With that in mind, it’s hardly a surprise that her entire life has remained a mystery.

In some interviews, Angelyne explained that she was from the Midwest. On other occasions, she’s mentioned that she’s from Idaho.

In 2001, speaking with the Los Angeles Times, she claimed that she was orphaned as a young child, and thereafter raised by foster parents in Idaho. However, this wasn’t exactly true.

Angelyne claimed that no one paid attention to her as a child, so she craved it as she grew up.

“I didn’t feel they were competent as parents, and this is where I relate to Marilyn (Monroe),” she said. “She got tossed around as a child too.”

In 2017, however, a whole new side of Angelyne’s life was revealed by Gary Baum of The Hollywood Reporter.

According to Baum, Angelyne’s real name is Renee Tami Goldberg, and she was born in Poland on October 2, 1950. She was the daughter of Polish Jews, who managed to escape the Chmielnik Ghetto during World War II, and emigrated to Israel.

By those facts, we can determine that Angelyne is today 71 years of age.

Reportedly, she lived in an ultra-orthodox community of Hasidic Jews called Bnei Brak outside of Tel Aviv before her family left for New York. They settled in Los Angeles’ Fairfax District, but after her mother passed away when Angelyne was only 14, she and her father moved to Panorama City in the San Fernando Valley. That’s where she attended high school.

Appeared on billboards all over Los Angeles

The Hollywood Reporter also provided documents from Ventura County – filed in 2016 – where a portion of Angelyne’s name change can be seen, from Renee Goldberg to Angelyne Llyne.

But is it correct? According to Scott Hening, Angelyne’s assistant and close friend for many years, it’s not.

“This stuff comes up every few years — it seems to get more and more ridiculous,” he told The Hollywood Reporter.

“My favorite one of all was this 300-pound black woman who claimed to be her mother. ‘I’m your long-lost brother,’ ‘your twin sister.’ Chalk it up to life in Hollywood. I’ve never heard of ‘Renee Goldberg.’ It’s laughable, it’s outrageous.”

“I’m not saying the paperwork [from the name change] isn’t legitimate,” he added. “I’m saying it ain’t her. Look, I get emails from another Scott Hennig, a karate expert in Texas. People think that’s me. There are a lot of girls out there named Angelyne. I don’t know what to tell you. And who knows how legitimate this old stuff is, going back to World War II?”

There are more stories about her life outside of simply appearing on billboards in Los Angeles. She claimed to be in bands in the LA area, but they apparently only used her image for publicity.

“They wanted me. They started interviewing me. That’s how it happened. It’s my thing. I’m the Billboard Queen.”

So what happened after that first billboard of Angelyne went up on Sunset Boulevard? Well, more billboards, of course, and more numbers to call.

But what was she advertizing? What could one do? Book her for a show? A corporate gig, maybe?

“Being huge is normal”

Even now, no one really knows – and the mystery that surrounds Angelyne remains very active. One thing is for sure; the billboards propelled her to instant stardom.

“It was like BOOM! But to me, being huge is normal. I do well big. I do well at 100ft. Wherever I came from, whatever is core to me, I was born with that,” Angelyne told The Guardian earlier in May.

“I’m married to a sheikh. Maybe I am a man. My husband paid for everything. A gay guy died and left me all his money. There is a new Angelyne every two years. I’m a prostitute. I was a mystery,” she added.

Angelyne grew into a Los Angeles legend – despite living in a city that always wants to rebrand itself. She often drove her pink Corvette on the streets of LA. After the billboard success, she began working in other fields.

Angelyne even recorded and released several music albums and singles. She also starred in films such as Earth Girls Are Easy and The Frisco Kid.

Eleven years after the first billboard, “The Billboard Queen” had more than 200 billboards all over the city.

“It’s so much fun being famous for nothing,” she said in a 1987 interview.

“I had to say nothing then because people wouldn’t understand. I’m not famous for nothing – I’m famous for my essence. I’m sitting on top of a pink cloud, sending inspiration to the world. The difference between me and other famous people is that I’m only attached to Angelyne. I don’t do endorsements. I want my image to be clean – clean, clean for Angelyne.”

Not only did Angelyne become a huge celebrity – without anyone really knowing who she was – bug her fans adored her. In a 2007 Los Angeles Times feature, it was reported that Angelyne sold postcards of herself for $5, $10 if autographed, large posters for $25, and $35 with a signature.

If you paid $45, you got a large poster signed and adorned with an “authentic lip print.”

Angelyne also reportedly sold autographed bras, panties, and a glow-in-the-dark Angelyne necklace. In addition, she claimed that “hundreds of thousands of members, or something like that,” were part of her fan club.

The rumors surrounding her are too many for us to document here. Some involve the idea that she has dated Charlie Sheen and Madonna. According to a 2022 Los Angeles Times article, she is “mobbed by adoring fans and Japanese tourists wherever she goes.”

In the early 2000s, Angelyne was even said to be planning a career in politics. She ended up 28th out of 135 candidates when she ran for governor in 2003. Angelyne ran on the slogan, “We’ve had Gray, we’ve had brown, now it’s time for some blond and pink.”

Last year, she told the San Diego Union-Tribune that California governor Gavin Newson should be recalled because “Angelyne can do better.”

This is Angelyne today – net worth

Moreover, she explained that if she were elected as governor, Angelye would focus on rehabilitating the homeless.

“I knew as a 3-year-old that I could run the world and do a great job,” Angelyne told the Los Angeles Times.

“So why not California? I’m already Queen of the Universe, so governor is a piece of cake.”

According to Celebrity Net Worth, Angelyne has a net worth of around $500,000.

But Angelyne herself didn’t like the series. Rather, it seems that she wants to tell her whole story; Angelyne revealed that she is working on her own film, Angelyne: Billboard Queen.

She says that it will explain what happened to her as a child and how she made it in Los Angeles.

“I was planning a film, but I wasn’t in a mad rush. I have a lot of footage, 100,000 pictures. You are gonna love my film! It’s gonna transform you. It’s The Godfather of films,” Angelyne told The Guardian.

Angelyne was seen driving around Los Angeles in her pink Corvette in the 1980s and 1990s. To this day, she does precisely the same thing, and continues to appear on billboards across the city.

Angelyne will continue to be quite the mystery. But at the same time, there’s an element of excitement in not knowing everything there is to know about her.

Please, share this article with friends and family if you recognize her!