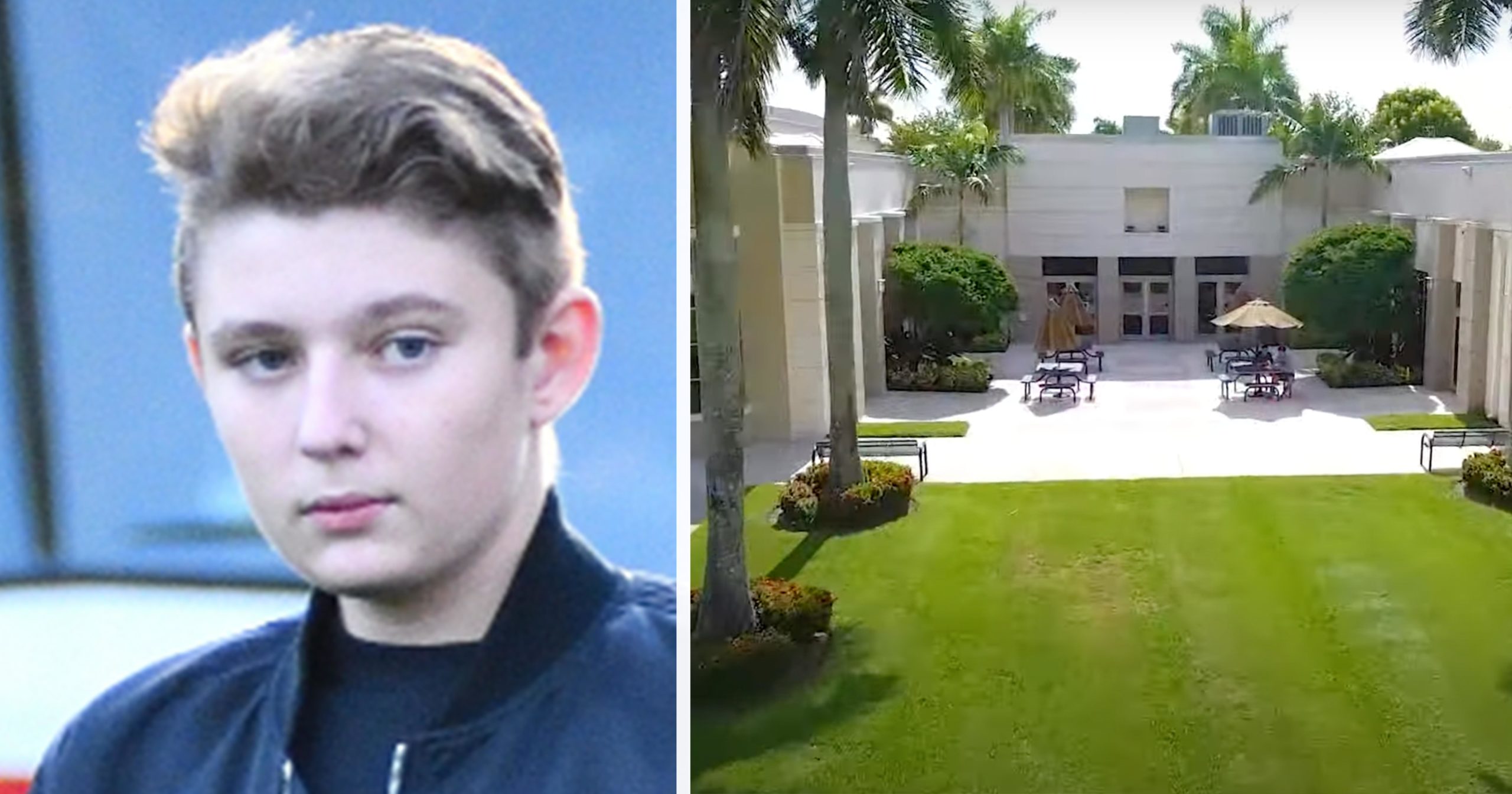 Barron Trump is busy settling in at his new school in West Palm Beach, Florida. He’s already had two weeks at Oxbridge Academy, from where he’ll hopefully graduate in 2024.

The school certainly is classy, and its tuition fees place it definitely more within the realms of the wealthy. Recently, though, it emerged that Barron will being kept temporarily away from the school, alongside the other students.

As per reports, on Friday the school was closed pending an investigation – it’s not clear wether Barron be back at school this week either.

It will come as no surprise that Donald Trump’s net worth is truly staggering, and as a result, Barron grew up in a world where he wanted for nothing.

Speaking with Parenting, Melania Trump revealed that Barron loved planes and helicopters as a young child. She always made sure to make his breakfast, as well as prepare his lunch. Even though they had a very luxurious lifestyle, they didn’t have a traditional nanny.

“We keep it down to a minimum,” Trump himself added, as to the nanny situation. “If you have too much help, you don’t get to know your children.”

All the same, Barron loves spending time with his dad. When Barron was younger, Melania made sure that Barron got quality time with his father, and the two oftentimes went out for dinner together. As he grew older, Barron also joined his father on the golf course.

So how about Barron Trump’s schooling? Well, best guesses are that after his high school graduation, he will, as many other Trump family members have done, head to one of the more prestigious schools. In actual fact, he is already attending one now.

“It’s Melania who wants to stay. She doesn’t want to take Barron out of school,” an unnamed source told the New York Daily News.

“She’s concerned that he won’t have the same relationship with new teachers that he has at Columbia Prep.”

Following his stay at the White House and school in Washington, he’s now enrolled at his new school in Florida.

A spokesperson for the private school Oxbridge Academy confirmed in August that Barron Trump was to enroll at the prestigious high school, as part of the class of 2024.

Being taught lessons of kindness

Furthermore, it also has clubs and different activities that students can participate in, such as the National Honor Society. All students at the school are also required to have an Apple laptop.

Just a couple of weeks after his joining the school was announced, Barron Trump started the new school year, as first reported by The Sun.

Barron started at the school about three weeks ago, and now, the world has gotten its first insight into what he’s going through at school.

According to the lunch menu, the son of the former President can enjoy chicken wings, grilled chicken, Maple Miso salmon and vegetarian burgers, as well as gnocchi, and even breakfast at Thursdays.

When it comes to education, it seems like Barron will also learn how to be a great friend. The school reportedly imparts lessons of kindness upon its students.

Closed due to ‘epidemiological investigation’

Last week, Barron Trump’s early days at the Oxbridge Academy took a swift turn. As reported by the Palm Beach Post, the school closed Friday, as the Florida Health Department conducted an investigation.

According to the newspaper, it was emptied regarding an “epidemiological investigation.”

Shaw declined to give further details, saying that the “epidemiological investigations are confidential.”

Oxbridge Academy’s spokesman Scott Bernarde declined to comment on the matter. According to the Post, the campus and parking lot were empty as of Friday morning.

It’s still not clear when Barron Trump and the rest of the students at Oxbridge Academy will be able to go back to school.

“Grown into a very tall boy”

During their time at the White House, Melania Trump was very clear on that she was keen on protecting her son from scrutiny, since being the president’s son can be a demanding thing. She actually took care of any statements or comments made by Barron.

It’s been relatively quiet from the entire Trump family following Donald Trump’s leaving of the White House. However, pictures from earlier this summer showed Melania and Barron Trump in New York City, and now, people can’t stop talking about Barron.

The new picture was snapped as Barron and Melania left their Manhattan home at the Trump Tower.

Even though Barron is only 15 years of age, he’s already the tallest person in his family.

Trump is “only” 6-feet-3. And earlier this year, he actually spoke of his son’s height.

Would you liked to have attended a private school just like Barron Trump or not? Give us your opinion in the comments section!

Meanwhile, share this story on Facebook with friends and family to wish Barron Trump good luck with his academic studies!