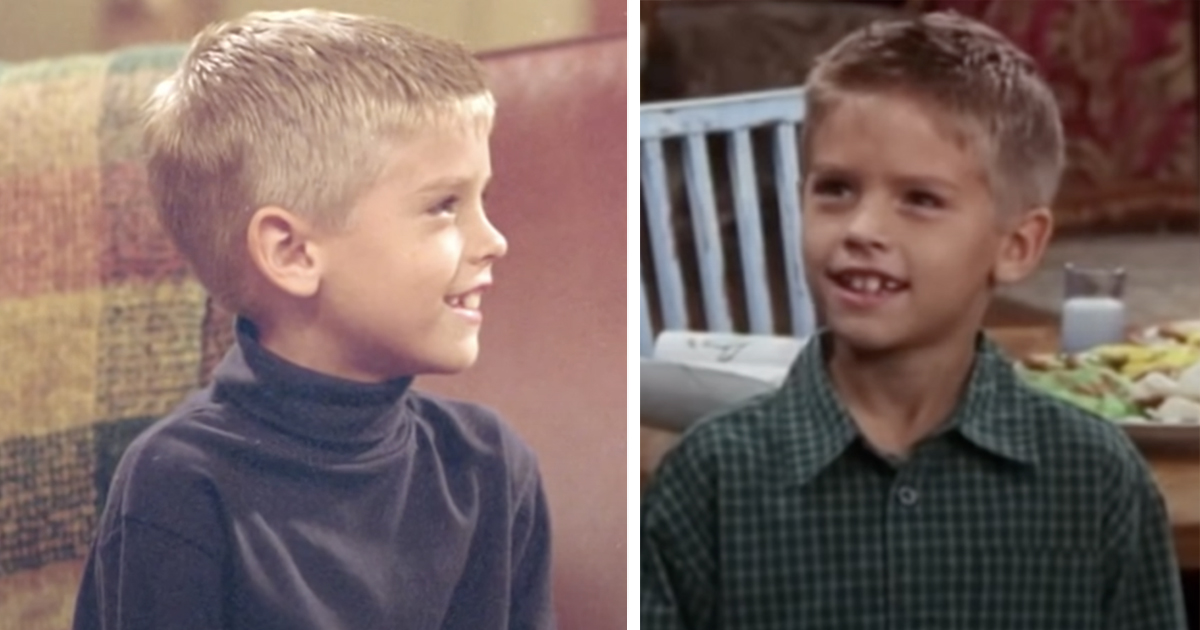 There are few shows as iconic as Friends. The legendary sitcom had its six stars in the main cast, but there were plenty of guest stars that gave the show even more depth.

Some of them didn’t appear too many times, but still managed to give the audience a piece of television history to remember. One such was Ben Geller, the son of Ross, played by actor Cole Sprouse.

Cole Sprouse appeared in a grand total of seven episodes of Friends, but still became a character many associate with the later seasons of the popular sitcom. It turns out there are many things that happened on set that Cole himself remembers to this day.

So what happened to Cole Sprouse after Friends? And what does he look like? Here’s all you need to know about him – and the secret crush he had on Jennifer Aniston.

When looking back through pop culture history, there are defining moments that changed everything. The Beatles and Elvis changed music forever, for example, and when it comes to television entertainment, it’s easy to say Friends had the same effect.

With 10 years and a total of 236 episodes under its belt, the sitcom became one of the most-watched television shows in history. Offering extremely strong and likeable characters, a very funny script and great guest stars, it’s easy to argue that Friends is one of the best shows to ever grace television sets.

Not only did Friends become popular all over the world, but the main cast of David Schwimmer (Ross), Matthew Perry (Chandler), Courtney Cox (Monica), Jennifer Aniston (Rachel), Lisa Kudrow (Phoebe) and Matt LeBlanc (Joey) also grew into very important pop culture figures. How many women didn’t want the classic Jennifer Aniston haircut? How many incorporated Chandler’s catchphrases into their daily life, or parroted Joey’s famous “How you doin'”?

Through 10 years of Friends, viewers got to see so many amazing moments. The characters grew up, got married (and divorced), had babies and went through endless and wonderful stories of friendship and love.

To be honest, the best part was that it felt just like your own friends in real life.

Still to this day, Friends is widely popular. Now, the next generation have been able to discover the series through various streaming platforms, and from looking at the numbers, it’s pretty clear it remains a big hit.

The making of ‘Friends’

Netflix bought the streaming rights to Friends in 2015 for some $100 million. According to Nielsen Ratings, it is the platform’s second-most streamed show, as reported by Forbes.

Stage 24 at the Warner Brothers Studios in Burbank, California became a legendary set. It’s actually renamed, “The Friends Stage”. Visitors can still to this day visit the set of the Central Perk café, as well as see many of those memorabilia items from the show, such as Phoebe’s legendary guitar.

So how did Friends even become a reality?

Kevin Bright, Marta Kauffman and David Crane are the creators of Friends. At the time of its consummation, the three of them were at low-points in their careers, not knowing what the next step would be.

They had just had an unsuccessful run with a sitcom called Family Album. Then, they had an idea. As they became nostalgic, thinking about finishing college and moving to New York City, things started to move.

“We were looking at a time when the future was more of a question mark. Maybe because that’s what we were feeling at the moment, but looking at that question mark and going: that’s interesting. Everybody knows that feeling,” Marta Kauffman told NBC in 2004.

“A time in your life when everything’s possible”

By December of 1993, they had a seven-page pitch ready for a show called Insomnia Café.

“It’s about sex, love, relationships, careers, a time in your life when everything’s possible. And it’s about friendship because when you’re single and in the city, your friends are your family,” read parts of the pitch.

NBC liked the idea and bought it. At the same time, Kauffman and Crane had began writing the pilot episode for the script.

It was titled “Friends Like Us“, though the show was eventually changed to simply “Friends“.

With casting done – which Kauffman confirmed was a tough process – the show was set to film. From the first time the six actors gathered on set for rehearsals, Kauffman knew something big was going to happen.

“The first was our very first rehearsal when we had all six of them onstage for the first time and they read the scene in the coffeehouse. I got chills up and down my spine and thought, ‘This is special. There is something about these six, this script for them, that’s special,'” Kauffman recalled.

“[The second big moment] was when I was walking down one of the main drags here in a Friends jacket and someone stopped me on the street to ask what was going to happen to Ross and Rachel,” she added.

“Lots of articles had come out and we were seeing them on magazine covers in airports, but that’s the stuff that got to me more — hearing it in conversation in a restaurant, my rabbi asking me about it, when it started reaching me in such strange connections.”

Friends became a huge success, with over 50 million people watching the finale of season 10. Across all platforms, the show has been streamed over 1 billion times.

For the main cast, their lives changed forever following the success of the shows. But there were many other, smaller roles, through which actors and actresses became known to the public.

One of them was Cole Sprouse, who starred as the son of Ross, Ben Geller. He was very young at the time, and in fact, turned out to be a great actor in his own right. This is what he looks like now!

Cole actually has a twin brother, Dylan, with whom he shared several roles with as a young kid. However, in Friends, he was the sole actor.

Who is Ben Geller in Friends?

Born on August 4, 1992, in Tuscany, Cole Sprouse’s parents worked as English teachers in Italy. Their grandmother, Jonine Booth Wright, thought that the twin brothers should try acting, and it wasn’t long before they got their first gigs.

Cole and Dylan became very successful child actors, starring in films and television shows such as Big Daddy and Grace Under Fire.

Just like other twin couple that shared roles, it was mostly because of child laws which prevented them from working longer hours. With twins, it made it easier to shoot longer hours, since they did a number of scenes each.

However, it was in the Disney Channel’s The Suite Life of Zack and Cody the two became stars.

In 2000, Cole Sprouse became part of a much bigger audience. He appeared in a total of seven episodes on Friends as “Ben Geller”, the son of Ross.

“Ben’s character wasn’t exactly like me, but kind of, because he was kind of a prankster at times and I’m always a prankster,” Cole said in an interview at the time.

“My favorite cast member to to scenes with is Jennifer [Aniston]. Because she’s hot!”

Had a crush on Jennifer Aniston

And yes, Cole Sprouse really thought she was. In fact, he later confessed that he had a major crush on her while shooting Friends. Speaking with Today, he said that he even was teased on set because of it.

“I’m pretty sure I fell in love with Jennifer Aniston, which the whole world had at that point,” Cole Sprouse recalled.

“But I do remember being quite intimidated around her, because of that. I remember blanking on my lines, and having a kind of stage fright when she sat next to me on the couch in one episode.”

He added: “I remember there was a cameraman who was like, ‘Little boy’s got a crush,’ or I forget what they said. Of course, I turned bright red. But I do remember feeling like I fell in love.”

Cole sure made a big impression as “Ben” in the sitcom, even though he was only there for seven episodes. He revealed that his favorite episode to shoot was “The One With the Holiday Armadillo”, when Ross tries teaching his son about their Jewish heritage for Hanukkah.

“I remember that quite well,” he said. “I was infatuated with the costumes, and the practical effects that they had. That was probably my most memorable thing to shoot.”

So what did Cole Sprouse do following his appearance on Friends? Well, he actually decided to take a break from acting.

He studied at New York University, graduating in 2015. The year after that, he was cast in the teen drama Riverdale, where he starred as Jughead Jones. To date, he’s been in 87 episodes on the show.

But besides being famous for his acting, Sprouse is actually a huge star on Instagram, boasting over 35 million followers. And he looks amazing!

He also has a second Instagram account, where he posts pictures of people trying to take pictures of him.

“This instagram is dedicated to the people out there who secretly take photos of me, and how I take photos of them first. May the fastest camera win,” the bio says.

In September 2019, fans of Friends once again got to recall the moment when Cole starred in the show. Posted on the Friends official Twitter account, the actor was sitting on the sofa with the stuffed animal Hugsy, which appeared in the show as well.

Weeks ago, HBO released Friends The Reunion. The six lead cast members where back on the set that started it all.

Several guest stars that appeared in the show over the years also made appearances. Among the guests were Elliot Gould and Christina Pickles – starring as the Geller parents – Janice (Maggie Wheeler), Gunther (James Michael Tyler), Richard (Tom Selleck) and Jill (Reese Witherspoon).

But not Cole Sprouse. Why?

“You know, we did invite some people who weren’t able to make it,” Ben Winston, director of the HBO reunion special, told The Wrap. “It’s a complicated time to be making television now because, you know, some people couldn’t fly internationally, some people were on other TV or film shoots, some people are in bubbles on stuff.”

Cole Sprouse has grown up to become a very handsome man. Hopefully, we will get to see him on the big screen soon again. And, why not, in a Friends reunion in the future?

Please, share this article with friends and family if you also love Friends!