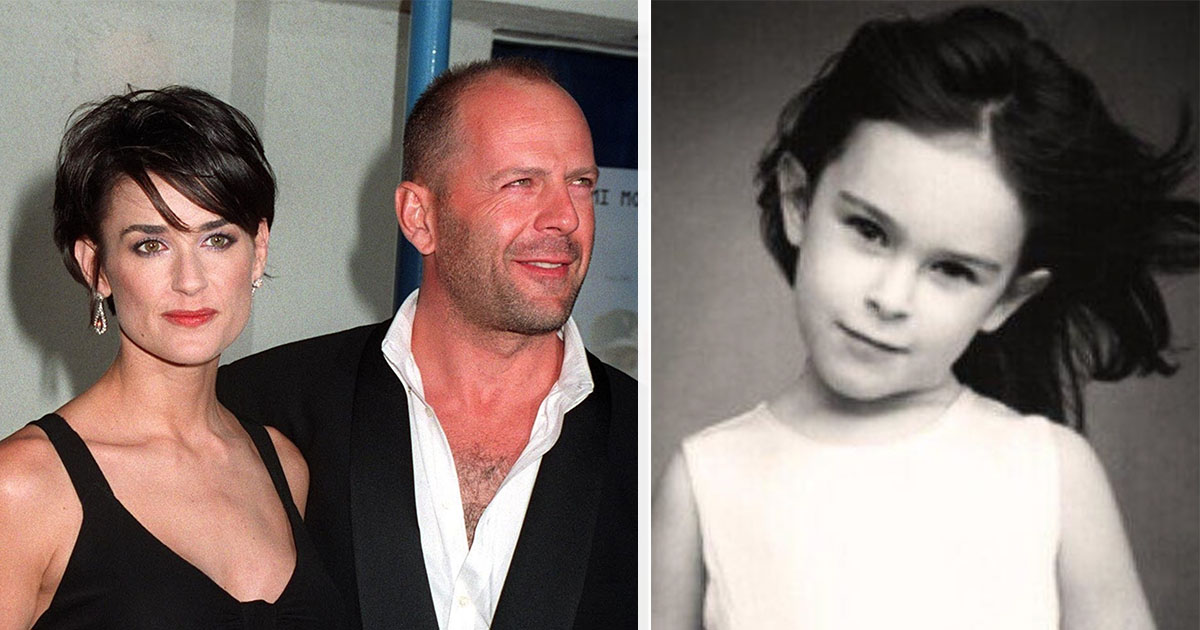 Growing up as the child of celebrity parents must be tough. Expectations for you to achieve great success are high, and a private and calm life is usually too much to ask for.

However, for Rumer Willis, the eldest daughter of Demi Moore and Bruce Willis, things actually turned out really well.

Sure, she’s grown into a great actress, but her childhood was actually far calmer than one could imagine.

Now, at 33, she’s created her own life and career. This is all you need to know about Rumer Willis!

Demi Moore and Bruce Willis were once the couple of Hollywood. At one point, they were two of the most well-paid actors in the entire business, and went on to create a family together.

Bruce Willis and Demi Moore met in 1987, at the premiere party for the film Stakeout. Interestingly, they both had other dates with them that night, including Moore’s then-fiancé Emilio Estevez, who was the star of the film.

At first, Moore and Willis became friends. But in the end, love took over. And it all became clear that first night they met, as Willis made a move.

“I’d never encountered treatment like this before,” Moore wrote in her memoir, Inside Out.

“Bruce was so gallant- in his own boisterous way, a real gentleman. When I said it was time for me to go home, he offered to walk me to my car. He was so eager about it- Like a little boy who didn’t want to miss the ice-cream truck. When he asked for my number, I felt a wave of schoolgirl flutters.”

However, their marriage wasn’t destined to last forever. In 1998, the couple announced their separation and filed for divorce two years later.

In 2000, the divorce was finalized. Willis admitted that he didn’t really know what went wrong between him and his ex-wife Demi Moore.

“I still love Demi. We’re very close,” Bruce Willis told Rolling Stone in December of 2000. “We have three children whom we will continue to raise together, and we’re probably as close now as we ever were. We realize we have a lifelong commitment to our kids.

“Our friendship continues. The institution has been set aside … It’s difficult to live your life and marriage under a magnifying glass, which is what happens to movie star couples.”

Bruce and Demi’s lives went on, with both still enjoying successful careers. Now, however, their eldest daughter Rumer is heading up the celebrity ladder of Hollywood herself.

This is all you need to know about her!

Rumer Willis was born on August 16, 1988, in Paducah, Kentucky. Her name Rumer was inspired by British novelist Rumer Godden.

Willis grew up in Hailey, Idaho, far from the glamour that was Hollywood. Living in Idaho instead meant a lot of outdoor activities and a deal of hard work.

“The school that I went to, every few weeks we would end up going on some sort of camping trip, whether it was like snowshoeing, or we’d go to like a yurt somewhere,” she recalled.

At the same time, however, money was of course no problem. She grew up on a big ranch in Hailey, made famous by her parents living there. The locals even called it “Haileywood”.

Growing up in a smaller town didn’t mean the film business was out of the question. Rumer Willis actually began her own acting career at a very early stage when she was cast in Now and Then, acting besides her mother Demi.

“It’s so cool to watch and it’s so funny to just see yourself so tiny,” she told the Huffington Post. “But I remember being on that set was just like heaven for me.

“All I wanted to do was talk to the older girls [Gaby Hoffmann, Christina Ricci, Ashleigh Aston Moore and Thora Birch] and feel like I was in it. It was so fun.”

When Rumer was 10, her parents separated. Of course, this was a tough period for her and her sisters. However, her parents made sure that it wouldn’t never affect the children publicly.

Grew up in the public eye

They were shielded from the publicity, which Rumer is truly grateful for today.

“I think at that time I didn’t have as much of an understanding of the public side of it to have that affect me as much,” she told Larry King.

Even though Demi Moore and Bruce Willis made sure that their children would live the same life despite the divorce, it was tough at times.

She, as the child of two major Hollywood celebrities, was still in the public eye, which was challenging.

”I think one of the hardest parts was growing up with having your whole life kind of be on display and have people have an opinion about it,” she said.

”Before you learn how to kind of get a tough skin or to really just have confidence in who you are without letting other people’s opinions affect that, that can sometimes be really hard and really get you down.”

Not only was Rumer Willis in the public eye from the start, but she later revealed that she was bullied at an early age.

Bullied as a teenager

The paparazzi press and blogs in the US started to grow in the mid-2000s, and the likes of famous blogger Perez Hilton bullied Rumer online.

It was, of course, totally unacceptable. Perez Hilton later apologized for some of his behavior.

“They said I had a huge jaw. They said I had a ′potato head’,” Willis recalled. “When you’re 14 or 15, I didn’t really understand having value in myself yet. My mind went to, ‘OK, so if I get skinny or if I dress the right way or present myself very hyper-sexually and dress this way, then I’ll be valued’.”

Following being bullied online as a kid, Willis made sure to do something about it on her own social media channels. Today, she has over 900,000 Instagram followers – and has made an effort to be positive, as well as be open about her own struggles.

“I think the most important thing for me is doing my best to lead by example,” she said. “I still deal with insecurity and trying to figure out my own path in all of it. “

Online trolls and bullying couldn’t stop Rumer. She moved to Los Angeles to attend the Wildwood Secondary School, and later the Interlochen Arts Academy in Michigan.

Willis also enrolled at the University of Southern California, but after only one semester, dropped out to pursue her acting career. Before her 20th birthday, she had starred alongside her father Bruce Willis in both The Whole Nine Yards and Hostage.

Through the years, she’s starred in several television series, making an appearance on Pretty Little Liars, Hawaii Five-O and 90210, among others.

In 2019, Willis got a big commercial breakthrough. She landed a part in Quentin Tarantino’s Once Upon A Time in Hollywood, starring opposite Margot Robbie as Sharon Tate’s best friend.

With the film industry being a notoriously tough business, Willis has acknowledged the support she has gotten from her parents.

“I don’t think I could have gotten luckier and couldn’t be more grateful for all the things that my parents have done to really make that happen,” she said.

“They put us first and I think that was one of the most important things that they did.

“I have friends whose parents can’t even be in the same room with each other and the only people that are really affected the most are the kids. It’s just sad. It’s really a bummer,” she added.

“I hope they can set an example for other families who may be going through that situation.  I mean what could be better than having four parents? It’s an even bigger support system.”

Rumer Willis – Dancing with the Stars

It’s been quite sometime since she worked alongside her parents in front of the camera. But maybe one day, they will meet again on-screen.

“I would love to. I mean, you know, if the right project came along, I would love to be able to work with them again especially in a scenario where our characters were opposing each other. That’d be interesting,” Rumer said.

As things stand, Rumer is best known as the daughter of Bruce Willis and Demi Moore, and it wasn’t her acting career that made her celebrity in her own right, at least not at the start. Instead, it was a completely different project that shot her to fame.

In 2015, she appeared on the television show Dancing with the Stars. Together with her dancing partner Valentin Chmerkovskiy, she ended up winning the entire competition and became somewhat of a household name.

Before the show, Willis had barely danced before. She took ballet lessons as a small child, but other than that, she hadn’t had any proper training. Obviously, it didn’t matter. And Willis danced herself all the way to the top.

“I think the whole experience was really special. It’s an incredible journey. I don’t think you can describe what an intense and unique experience it is,” Willis told Time. “I had the time of my life.”

Speaks out on mental health

The pandemic has been tough on all of us. And that’s also the case for Rumer Willis. Through her Instagram page earlier this year, she opened up about her mental health, saying she’s struggled with bad anxiety.

“I get nauseous and my heart won’t slow down,” she wrote. “It sometimes feels like a force so much bigger than me has taken over the control panel in my [brain].

“I have to catch myself when I find myself focusing on just wishing it was somehow different.

“So here I am, sitting here feeling like I’m gonna melt, even though I know I won’t and just trying to lean into the discomfort as scary and painful as that is.”

Rumer Willis is so brave for speaking out on her mental health problems. Hopefully, this will help many people all around the world as well.

Please, share this story with friends and family on Facebook to wish Rumer Willis all the best of luck in the future!