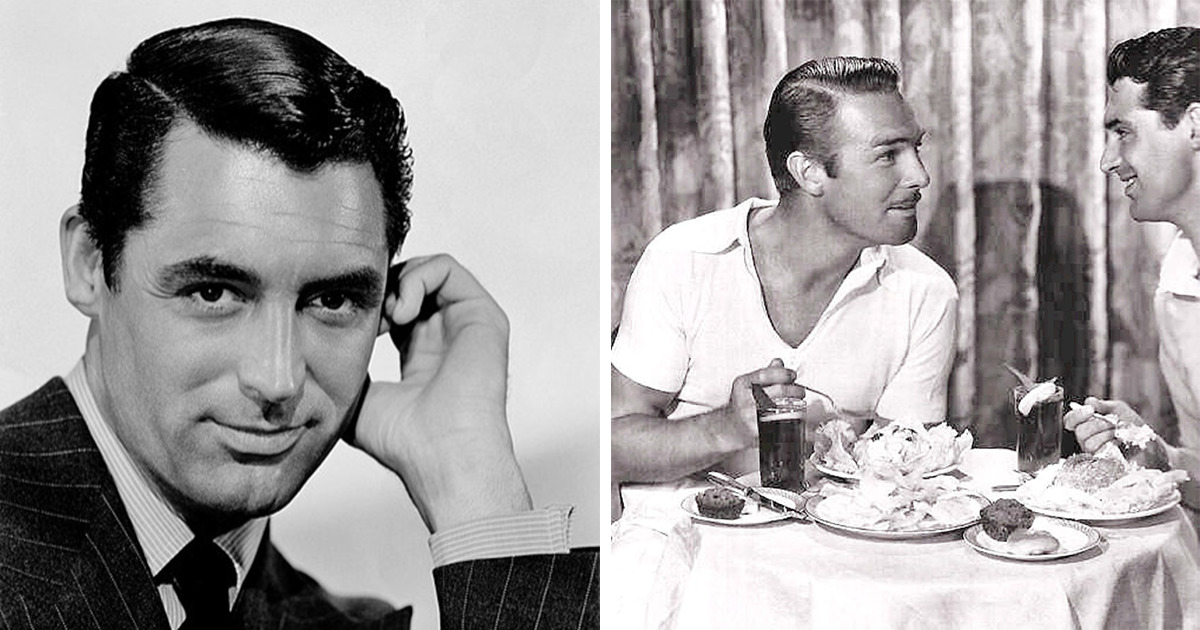 Cary Grant is one of the great names of Hollywood’s Golden Age. The handsome actor is considered one of the most attractive classic films actors – but his looks was not the only thing he had to offer.

Grant was a funny and charming man who was able to take those gifts to the screen, resulting in an irresistible actor. The great director Alfred Hitchcock called Grant his favorite actor, and he was very popular among his female colleagues as well.

Bu in his private life, his relationships with women never really worked. He blamed his mom for it, but rumors insinuated the reason was something else…

Cary Grant had an admirable wit, he was the kind of man who could get the question “How old Cary Grant?” and answer: “Old Cary Grant fine. How you?”

Although Grant was elegant and sophisticated, he was a desperately insecure man. The actor married 5 times and “was destroying his marriages and multiple love affairs to compensate for his unhappy childhood,” according to the documentary Becoming Cary Grant.

Cary Grant was born Archibald Alec Leach in Bristol, England, January 18, 1904. His family was poor, his father had a drinking problem, and his mom lived with mental illness.

When he was 11, his mother vanished.

“I came home from school one day and she was gone. My cousins told me she had gone to a seaside resort. I thought that odd. It seemed rather unusual, but I accepted it was one of those things that adults do,” said the actor as per Daily Mail.

Later, his father started a new family with another woman and said Grant that his mother had died. Twenty years later, Grant discovered that his mom was alive. The truth was that his father placed her in the Bristol Lunatic Asylum.

“It gradually dawned on me that she was not coming back. She left a void in my life, a sadness of spirit that affected everything I did. I always felt my mother rejected me,” confessed Grant.

He experienced a deep sorrow about his mom that never went away.

From poor boy to Hollywood star

At a young age Archibald Alec Leach became attracted to acting. When he was 16, he went with the Pender Troupe for a tour in the US.

He moved to Hollywood and started to performance in dramas and crime films, and he later become better well-known for his participation in romantic comedies, such as The Awful Truth (1937) or Bringing Up Baby (1938) which he starred in with another big name, the actress Katharine Hepburn.

“I had this great affection for him because I knew he understood me.  It was an unspoken friendship, which was wonderful. He would open up his arms wide when he saw you, and hug you, and smile, and let you know how he felt about you,” said his co-star in Charade, Audrey Hepburn.

Grant created a new style to interact with actresses, letting them flourish on screen and making them more visible.

Deborah Kerr, Grant’s co-star in Dream Wife, An Affair to Remember, and The Grass is Greener said about him: “His elegance, his wit, his true professionalism were outstanding, and I learned so much from just watching him work.

As a person, apart from his talent, he was warm and affectionate and a joy to have as a friend.  He lived simply and was not tremendously social – a very private person.  He was also a keen and shrewd businessman; in fact there was no end to his talents. I treasure my memories of him.”

Some of the most important roles Cary Grant played were in some Alfred Hitchcock’s films. The director found in Grant the talented actor he wanted for some of his best films, like To Catch a Thief (1955), Suspicion (19419 and North by Northwest (1959).

While the actor left a turbulent childhood in England, his family life in the US wasn’t easy either. Grant got married five times and divorced four times.

HE tied the knot for the first time in 1934 with the actress Virginia Cherrill. The couple divorced one year later, and Virginia demanded $1,000 per week in benefits of the money Grant made on his time at Paramount, according to The Fashion Ball.

In 1942, Grant married again. This time to Barbara Hutton, who was then one of the richest women in the world. Grant didn’t want to be accused of marrying her for her money and decided not to agree to any financial prenuptial agreement. The marriage lasted two years.

Grant worked with the actress Betsy Drake in two movies and the pair fell in love. The actor married her in 1949, hoping this third marriage would be his final and happy one.

It wasn’t the last one, but it was the longest. Grant and Drake were together 12 years.

But Grant wasn’t ready to give up on marriage. In 1965, the actor married Dyan Cannon, a woman 33 years younger than him.

They were not married long, two years, but the couple had a daughter, Jennifer, the only child Grand had. Jennifer was born in 1966, when the actor was 62.

Grant wasn’t done with marriage after his fourth divorce. The actor tied the knot for the fifth time with Barbara Harris, an actress 47 younger than him. Harris became his widow when the actor died at the age of 82, in 1986.

But his relationships with women never ended well and the actor admits that it was difficult for him to get attached to women.

“I was surrounded by all sorts of attractive girls. I was never able to form attachments. If I had paid more attention I might have found contentment in marriage,” writes Daily Mail.

The documentary Women He’s Undressed, about the Hollywood costume designer Orry-Kelly, tells the story about the designer and Grant’s relationship, even though “the actor was denying his true self in due to the fears for being part of an homophobic film industry.”

“There was such a pressure to conform to what was considered an ordinary, normal life,’’ says the director of the film, Gillian Armstrong.

Kelly was a tailor from Australia and met Cary Grant when he arrived in New York in the 1920s. They became roommates, but according to the documentary, they were more than just roommates – they were lovers.

Kelly later moved to Hollywood with Grant, and started a career in the fashion industry, dressing actresses like Kay Francis, Dolores del Río, and Katherine Hepburn.

Kelly was behind some of the most famous creations the stars of Hollywood wore on mythical Hollywood movies, such as Ingrid Bergman’s jet-set noir in Casablanca (1942) and Marilyn Monroe’s tightened, nude dress the actress wore in Some Like it Hot (1959), as per Out.com.

Gillian Armstrong, the director of Women He’s Undressed, told Out:

I couldn’t believe that this man’s extraordinary body of work had been overlooked. (…) He had such immense talent, and I became interested in exploring what it was that made it possible for him to succeed in that particular time in Hollywood.

Amstrong said, referring to Kelly’s sexuality: “Orry refused to hide his sexuality with a fake marriage. He had such a great sense of personal integrity, and we wanted to capture that sense of bravery in the film.”

That wasn’t the direction Cary Grant took. The actor never talked about any relationship with men.

Cary Grant and the actor Randolph Scott met for the first time in 1932, on the Paramount set of Hot Saturday, and they soon moved in together.

They were officially roommates, but soon the media said that the two handsome actors were in a relationship.

The couple lived together, on and off, for almost 12 years during the 1930s, in a Santa Monica beach house and a mansion in Los Angeles.

The rumors continued and they strategically planned to appear in a fan magazine as bachelors sharing a home together, because Paramount studios were not willing to allow Cary Grant to become openly homosexual.

Despite the rumors, there are sources that claim the pictures were merely a publicity campaign. Referring to Grant’s homosexuality or bisexuality, his ex-wife Dyan Cannon also denied her former husband was gay.

Grand’s daughter Jennifer says in her memoir, Good Stuff, that the rumors were unfounded. “Can’t blame men for wanting him (…) And wouldn’t be surprised if Dad even mildly flirted back. (…) Dad somewhat enjoyed being called gay. He said it made women want to prove the assertion wrong”, Jennifer wrote.

But Jennifer leaves open the possibility that her father wasn’t exclusively heterosexual: “Did Dad ever experiment sexually? I don’t know. Have I ever experimented sexually? Have you? If experimentation makes one gay, then my guess is that most of the world is gay.”

We’ll never hear Grant’s own version of his own life, but no matter what, he will always be one of the greatest stars in the sky of Hollywood.