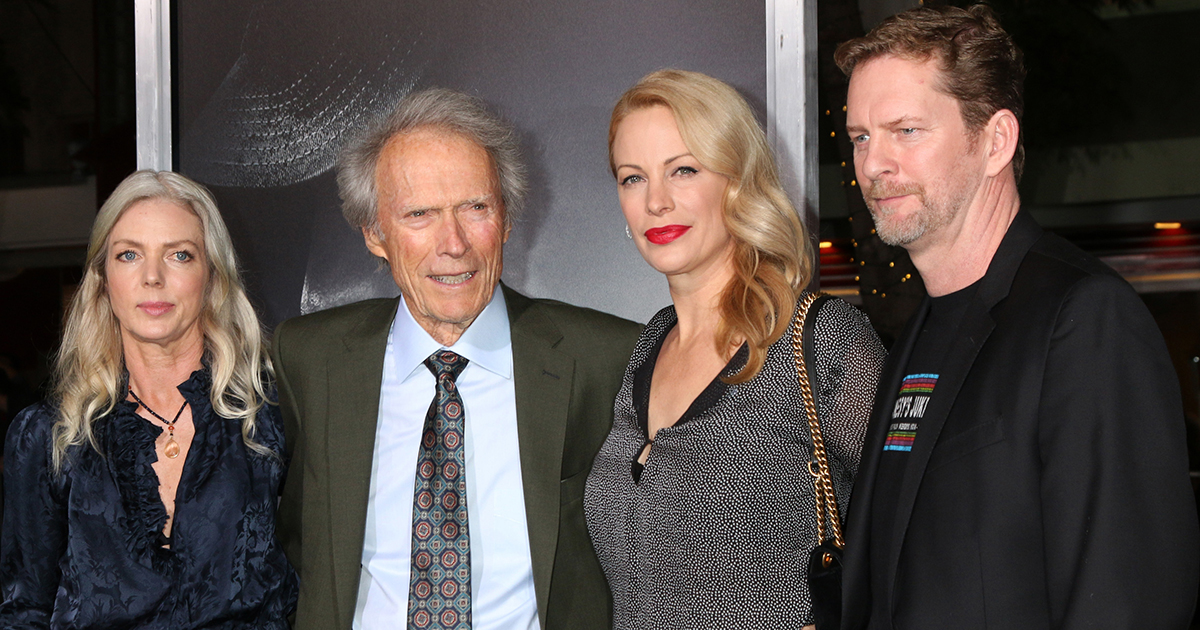 We all know and love movie star and director Clint Eastwood.

Along with the countless movie awards he has, for many years, been the symbol of masculinity for his iconic roles. However, his personal life is not something he likes to shout about.

But the 91-year-old legend has had his fair share of romances and casual affairs; as well as being married twice he has eight children.

Today, Clint Eastwood finally seems to have found the love of his life in Christina Sandera, a restaurant hostess who is 35 years his junior.

Given that Clint’s been in the spotlight since the mid-’50s, there’s been no end of rumours and speculation surrounding his love life.

Over the years, the Hollywood icon has dated a number of famous women and his list of long-term romances and short-term affairs is almost as long as his filmography.

In 1953, Eastwood had a relationship with an unknown woman which led to the birth of a daughter named Laurie in 1954 – but the movie star didn’t even know she was born. She was eventually adopted by a couple living in Seattle.

Eastwood would go on to marry Maggie Johnson, but it’s rumoured that his interest in other ladies endured. Speculation is rife surrounding a number of extra-marital affairs during this time, including one with a stuntwoman named Roxanne Tunis that produced a daughter, Kimber, in 1964.

Eastwood and Maggie then had a son of their own, Kyle, in 1968, and a daughter, Alison, in 1972. Trysts and flings undoubtedly occurred over the following years, but it wasn’t until 1984 that Clint and Maggie would go their separate ways in an official divorce.

For his part, Eastwood would go on to sire two legally fatherless children – Scott, 1986, and Kathryn, 1988 – in the ’80s. The actor then became a father once more thanks to his relationship with Frances Fisher. Their daughter, Francesca, was born in 1993.

Fast forward to 1996, and Eastwood had tied the knot with news presenter and California native Dina Ruiz. The couple first met in 1992, when she interviewed him for KSBW-TV.

“He’s the least pretentious person I’ve ever met. And I love that he’s so conscientious about nature and letting things remain as they are,” Dina said in 2007, about her then-husband.

“She’s the one I’ve been waiting for,” Clint said at the time.

In 1996, the couple welcomed a baby daughter, Morgan Eastwood, into the world. But typical of Clint’s love life, his marriage with Dina wasn’t to last.

In 2013, the couple split from one another and Dina Eastwood filed for divorce in October the same year.

After breaking up with Dina, Clint has been seen with several women. But in 2015, Clint started to appear with a vivacious blonde by his side. The unknown woman turned heads when she walked on the red carpet as Eastwood’s date to the Academy Awards in 2015. Many thought she looked very similar to Clint Eastwood’s former girlfriend Sondra Locke…

A few months later, the same woman showed up together with Eastwood again – at the Ranch Foundation’s first annual “Fallen Garden Party”.

So, who was this mysterious woman?

The tabloids and gossip reporters went bananas and began to speculate. Soon, they managed to reveal the the identity of Clint Eastwood’s new girlfriend – her name was Christina Sandera.

Christina Sandera, a California native, captured Clint Eastwood’s heart when they first met in 2014. Christina was working as a restaurant hostess at Eastwood’s Mission Ranch Hotel, a resort created by Clint in Carmel, California. Sandera and Eastwood were introduced by a common friend and fell in love in no time.

According to reports, Christina was born in Carmel, California. Clint’s girlfriend is 56 years old as of today, making her 35 years his junior. Before meeting the legendary actor, Sandera was married to bakery owner Paul Wainscoat for 11 months. Shortly after Clint and Christina’s relationship became know, Paul Wainscoat went public and slammed his ex-wife.

He called their marriage “hell” and said “I wish Clint all the luck in the world with that woman,” according to the National Enquirer.

But by all accounts, Clint and Christina seem to be very happy together – their relationship has now lasted for eight years.

After Eastwood’s failed marriage with Dina, the actor decided to stay put in the family’s home in Carmel Valley. Shortly after they began dating, Christina moved into the $20 million mansion Eastwood built for his ex-wife Dina.

“He’s truly happy with her,” a source told Closer Weekly.

“She’s fun, easygoing, and his kids like her too. She’s on an even keel like he is.”

It also seems that the Eastwood family has welcomed Clint’s new love with open arms. Christina has been seen together with Clint’s children and they appear happy that their 90-year-old father has found someone to share his final years with.

In December 2018, during the premiere of “The Mule”, Christina appeared side by side with her boyfriend’s kids and his first wife, Margaret “Maggie” Johnson.

“Clint knows this might be his last film, and he wanted all of his kids to be there,” an insider revealed to Closer Weekly at the time.

Clint has had many women in his life and that doesn’t surprise me, given the fantastic career and success he has had. But today it seems that he has found someone he’s truly happy with.

He looks so happy with his new girlfriend and I wish them many happy years to come!