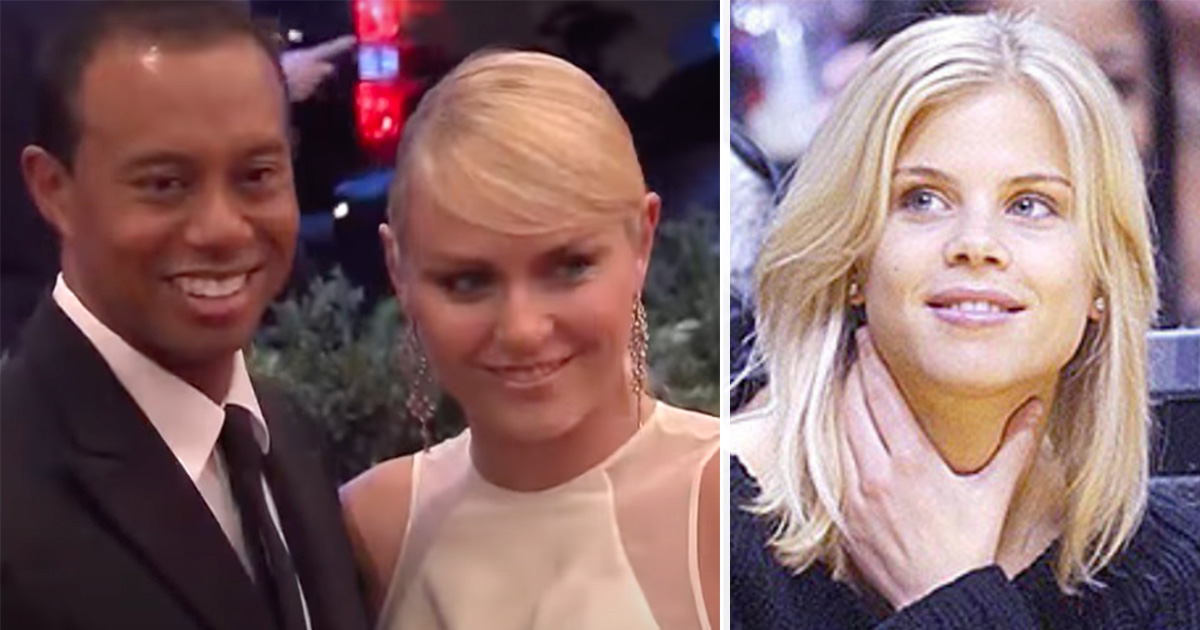 Tiger Woods and Elin Nordegren had a long marriage before everything came to a rather dramatic end in 2010. Now, Nordegren has moved on and started a new family with her boyfriend Jordan Cameron.

The enormous divorce settlement with Woods left her with more than $100 million, as well as the family house. The Swedish model has moved on, though, and bought a new house in Florida. Boy, is it something else!

Despite all the positive things one might have to say about Tiger Woods, there are many people who don’t like him.

Personally, I think a lot of people turned their backs on him after the huge infidelity scandal that was revealed in 2009.

Back then, The National Enquirer published details on how Woods had been cheating on his Swedish wife, Elin Nordegren – according to some reports, he was unfaithful with at least 18 different women.

Just days after the article was published, Woods left the couple’s home in his car, only to crash into a fire hydrant and a tree.

The mighty Tiger Woods had fallen.

But how could it go so wrong for one of the world’s greatest and most popular athletes? Tiger Woods had everything – a beautiful wife, adorable children, a lot of money, and a fantastic career.

I remember the first time I read that Woods was cheating on Nordegren, and I’ll never forget thinking, “What the hell is he thinking?”

It’s history now, but I can’t stop wondering about what happened to Nordegren and the children. There is, of course, an answer to that, but perhaps it’s better that we take it from the beginning.

Worked as a nanny

Parnevik, a Swedish professional golfer who lived in the US, hired Nordegren as a nanny for his children. It was Parnevik who introduced Woods and Nordegren to each other, during the Open Championship in 2001.

The year before, Woods had insisted on meeting Nordegren, but she was dating another man at the time. As a result, it was far from set in stone that Woods would get the chance to even meet Nordegren. According to Parnevik’s wife, Mia Parnevik, many golf pros were interested in their blonde, beautiful nanny.

For her part, Nordegren, who dreamed of becoming a child psychologist, had no interest in dating Woods.

“Tiger was OK with that,” Mia Parnevik said. “There was a big line of single golfers wanting to meet her. They were gaga over her. “

But somehow their paths crossed and Woods and Nordegren fell in love. They got engaged in 2003, during a four-day vacation on a South African game reserve.

The couple married the following year, at the 19th hole at the Sany Lane resort in Barbados. The wedding ceremony was described as “ultra-private”, and among the guests were celebrities such as Michael Jordan and Charles Barkley.

The couple had two children together. In 2007, their daughter Sam Alexis was born, and in 2009, Nordegren gave birth to a boy, Charlie Axel.

But the fact that the marriage was under severe pressure became very clear in 2009. In December that year, all hell broke loose when Tiger Woods’ extramarital affairs were exposed in the media. The man who introduced Woods to Nordegren, Parnevik, was remorseful.

”I’m kind of filled with sorrow for Elin since me and my wife are at fault for hooking her up with him, and we probably thought he was a better guy than he is,” he said.

Woods took a break from golf to focus on the family and his marriage, but too much was ruined. The couple divorced in 2010, and Nordegren is said to have received $100 million after the settlement. She also got monthly child support of $20,000, as well as their home in Windermere, Florida.

Following Woods and Nordegren’s divorce, the couple agreed to have a civil relationship to make it easy for their children. They still co-parent them together.

In a 2010 interview with People, Nordegren only had good things to say about her former husband.

“I wish him all the best in the future, as a person and as an athlete,” she said. “I know he is going to go down as the best golfer that ever lived, and rightfully so, I feel privileged to have witnessed a part of his golfing career.”

Being the wife of Tiger Woods means you will automatically be in the spotlight as well.

Stayed outside the spotlight

However, Nordegren didn’t do any interviews during the time the couple were married. Why?

“My plan was to just stay the way I was,” she explained in 2010. “For my kids, I felt that remaining private was the only normalcy. I could give them, since they have a very famous dad. But after everything that happened and everything that was written and speculated — what I did or didn’t do — I felt like setting some things straight.

“I’m so embarrassed that I never suspected — not a one,” she added. “For the last 3 1/2 years, when all this was going on, I was home a lot more with pregnancies, then the children and my school.”

Nordegren bought a luxury house in Florida, where she and the children have lived since the divorce, according to Forbes. However, she later sold her ocean front, $50 million dollar estate to by a new place. And it sure is something spectacular!

Her new house in the prestigious Old Palm Golf Club gated community in Florida was built in 2010. The property spans 13,523 square feet and sits on 2.09 acres of land, according to Realtor.com.

Nordegren reportedly payed around $9.9 million for the house, which has six bedrooms.

So let’s have a look inside!

Elin Nordegren’s new property is newly renovated, and it looks out over a wonderful pond on the gated community’s own golf course.

The house is very modern and integrated with a smart home Lutron HomeWorks System. It controls everything from lighting to the security-system and can be managed with a phone.

Besides the aforementioned six bedrooms, the house also has eight bathrooms, a formal dining room, gym, an office, an elevator, as well as a media room that’s perfect for family nights with the kids.

The backyard of Elin Nordegren’s new house, meanwhile, is also spectacular. It features a nice pool, alongside a spa and a full-size outdoor kitchen.

The backyard, with its pool and spa, can be seen from nearly every room in the house, since every room features large windows, giving Elin and her family a great view of the oasis which they call home.

The kitchen is a dream for every chef, and includes a special grill, a coffee bar and a state-of-the-art dual island kitchen.

In addition, the kitchen is attached to a glass-enclosed refrigerated wine room, where you can store more than 500 bottles of wine.

Getting a good night’s sleep is very important, and Elin will definitely have that in her master suite. It includes a fireplace, a separate sitting room, custom closets, as well oversized dual bathrooms. It also has a large terrace with a view of the golf course, according to Realtor.

Elin will also have plenty of space to store her cars, since the house comes with multiple garages. If guests are visiting, they can either stay in the house or in a separate one-bedroom apartment, which is also on the property.

In recent years, Nordegren’s relationship with Woods has improved and the couple are now friends, not least for the sake of their children.

“Having the relationship that I have now with her is fantastic. She’s one of my best friends. We’re able to pick up the phone, and we talk to each other all the time. We both know that the most important things in our lives are our kids. I wish I would have known that back then,” Woods told Time.

”My relationship with Tiger is centered around our children, and we are doing really good – we really are – and I am so happy that is the case. He is a great father,” Nordegren told People in 2014.

Nordegren never gave up on her dream of becoming a psychologist – after nine years at Rollins University, she graduated in psychology.

Nordegren was one of the keynote speakers at the college’s commencement ceremony, and joked about her journey as a college co-ed while hearing one-liners about her divorce from Woods.

“I was surprised when they called and asked if I wanted to give this speech. In the press I have been called a woman of few words and criticized by the media for not talking very much,” she said.

“A commencement speech is meant to inspire. And when I started to think what I should say to you all today, I got a little scared. What words could I use to inspire us all after a long journey in college? One week after that phone call, I got off an American Airlines plane and one of the flight attendants gave me a note. I hurriedly took the note and said a quick ‘Thank you’ and continued to pick up my bags. “

She added: “Later, I finally had time to read what it said. The note read: ‘Thank you for being my inspiration, greetings from another single mom.’ I was touched by the beautiful words from a total stranger.”

After her broken marriage with Woods, Nordegren began dating the now deceased Chris Clin, an American billionaire entrepreneur and philanthropist.

In June 2019, Nordegren announced that she was expecting a baby again – this time with former NFL player Jordan Cameron.

”She is super happy and I am super happy that I have my ninth grandchild, yes it is not wonderful, Nordegren’s mother, Barbro Holmberg”, told the Swedish magazine Svensk Dam.

In late February of 2021, Tiger Woods was involved in a serious single-vehicle crash in California. Woods struck a median with his car, then a street sign and a tree and finally rolled over several times before the car stopped on an area covered in grass.

The golf legend was taken to the hospital with serious leg injuries, and it will be a long time before he’s done with the rehabilitation.

On March 1, Tiger broke his silence after the crash, which many thought could have been the end of his life.

“It is hard to explain how touching today was when I turned on the tv and saw all the red shirts. To every golfer and every fan, you are truly helping me get through this tough time”, Woods wrote in his first statement.

Elin Nordegren has started a new life following her divorce with Tiger Woods, and she sure looks to be doing great! We hope she and her new family will enjoy their life in the new house. I sure would!

Please, share this story if you also would want to live in Elin Nordegren’s new house!