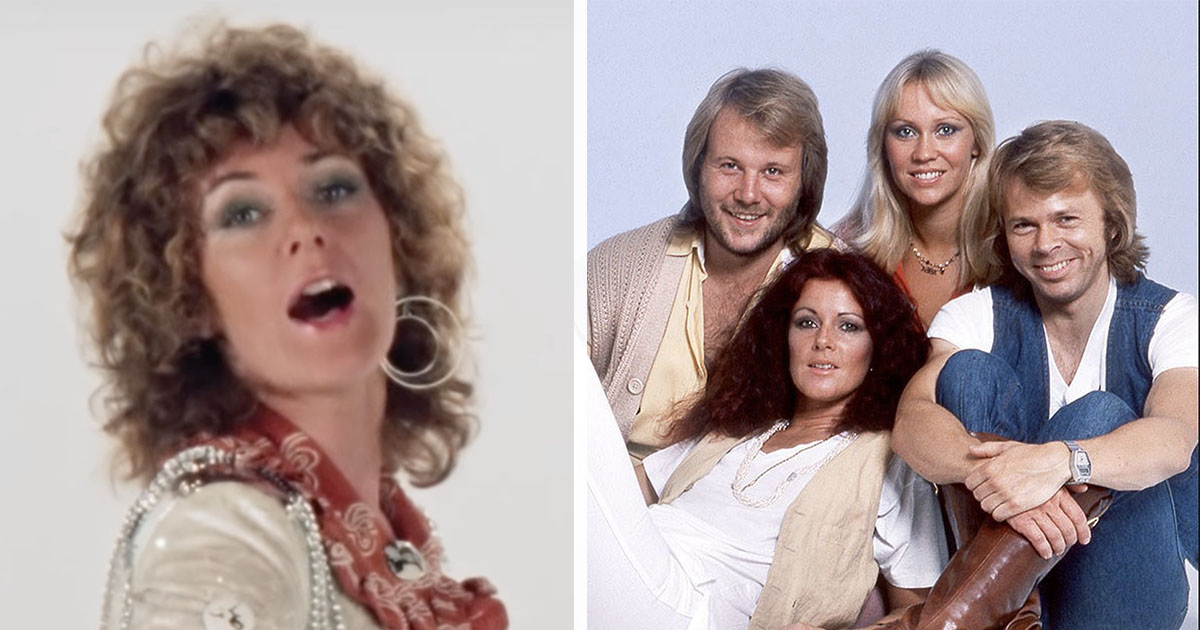 ABBA became one of the greatest groups of all time in the 1970s and 1980s. The Swedish band with Bjorn Ulveaus, Benny Andersson, Agnetha Faltskog, and Anni-Frid Lyngstad (more famously known as Frida Lyngstad) took over the world with their new kind of music – and still to this day, the four are famous all over the world.

As ABBA split, the four members went in different directions. For Frida Lyngstad, that ment moving on to a solo career. But today, she has disappeared from the spotlight to live a calm and private life.

So what is she doing today? And what does she look like today, age 75? This is all you need to know about her!

There are very few people that haven’t heard ABBA. It doesn’t matter if you were there when they performed Waterloo for the first time, or weren’t born for another 30 years. The 10-year-olds of today most likely dance just as wildly as anyone ever did upon hearing the group’s music.

Something that’s pretty unique about ABBA is the fact that all of the members virtually disappeared following the group’s split. Sure, they continued to make music, but were content to live a quiet life outside of the spotlight. Agnetha Faltskog certainly was – and that also went for Anni-Frid “Frida” Lyngstad.

So what happened to Frida following ABBA’s split? And what is she doing today? This is all you need to know about her!

Frida Lyngstad was actually born outside of Narvik, Norway on November 15, 1945. She moved to Sweden when she was only 18 months old and early on in her life, she had to deal with some very difficult personal tragedies.

Her father disappeared during World War II, and her mother passed away less than two years after she was born.

Frida grew up in the town of Torshälla outside of Eskilstuna, Sweden. At an early age she developed an interest in singing and performing, and at age 11,  she made her stage debut at a Red Cross charity event.

Frida Lyngstad was all about performing. She started working with several bands, and in 1961, she met her first husband. Together with Ragnar Fredriksson, she welcomed two children in Hans (born 1963) and Lise-Lotte (1967). However, their marriage ended in a divorce in 1970.

Frida continued her work as a singer, and in 1967 she won a talent contest in Stockholm, Sweden. She was signed to EMI records, but she didn’t quite get any commercial success.

In 1969, Frida met Benny Andersson, who then was a member of the group Hep Stars. He had previously worked with another talented musician, Bjorn Ulveaus, who at the point was dating a singer named Agnetha Faltskog.

Frida and Benny fell in love and also started working together with Bjorn and Agnetha, and in 1970, the four performed together in a cabaret show called Festfolk.

At that point the four very talented musicians were in the same room, but they weren’t thinking of starting a band together initially. Then, Frida and Agnetha featured as background singers on the 1970 Bjorn and Benny album Lycka [Happiness].

The four soon started to work together. In 1972, they recorded the song People Need Love, but it only achieved minor success in Sweden. At this point, the group styled themselves Björn & Benny, Agnetha & Anni-Frid.

They decided to compete in Melodifestivalen, the Swedish qualification competition for the Eurovision Song Contest, and performed the song “Ring, Ring”. They finished third, but the song became a really big hit in Sweden.

“Ring, Ring” spread to several European countries, where it continued its success. By this point, the group started to get recognition all over the place. One year later, in 1974, they would finally realize their ambitions.

They entered Melodifestivalen once again – but this time with a song titled “Waterloo.” They won the Swedish qualification, and then did something that would change the course of music history before they performed at the Eurovision Song Contest in Brighton: they decided that their group would have a new name.

“We really ought to get a group name. Right now we just use our names, but Björn, Agnetha and Frida are difficult to pronounce abroad, Frida said in a 1973 interview. “Right now we are working on an album in English together. And this spring there will be a TV-show and a radio show where we will be hosting.

“During summer we will go on tour in the folk parks for three months. But it will only be Friday, Saturday and Sunday. Benny and Björn are working as producers during the normal weekdays. I plan to have some time off and I think the children will come and visit me again.”

Well, time off wasn’t really what the four members of the group was getting. In fact – which they probably didn’t anticipate themselves – it was the start of something legendary.

And yes, they needed a new name. And “ABBA” was born.

While ABBA went on to win the Eurovision Song Contest – a moment in ABBA history which by many consider to be the most iconic.

The success of “Waterloo” was enormous. But it was just the beginning of what was a new era in music history. Since winning Eurovision didn’t guarantee one success post-competition, it took some time before ABBA got their next big hit.

It was No.1 in Australia for 10 weeks – and ABBA fever “down under” was insane. Australia actually gave the group a total of six Number One hits, becoming one of the most ABBA-crazy countries.

Over the following years, ABBA released several albums, and the hits just kept on coming. Songs like “Fernando” and “Dancing Queen” quickly found their mark, with the last one being the group’s only No. 1 in the US.

At this point, ABBA had turned themselves into one of the most popular groups in the world – and rightfully so. The list of hits the group released is long, adding songs like “Money, Money, Money,” “Knowing Me, Knowing You,” “Chiquitita,” “The Winner Takes It All,” “Super Trouper,” “Take A Chance On Me,” and “Lay All Your Love On Me.”

In 1978, Frida and Benny got married. However, even though this was a very joyful time for the couple, ABBA had some problems within the group as well.

As the band released their sixth album in 1979, Agnetha Faltskog and Bjorn were going through a divorce. However, it wasn’t ugly, and the band continued with their professional work.

Frida Lyngstad and Benny Andersson’s marriage ended in a divorce. It became official in 1981, and a year after, the band felt that they pretty much were done.

At the time Frida and Benny got a divorce, she felt that she didn’t want to leave the band. So instead, she decided to reinvent her image.

“I changed my whole style. I cut my hair very short, you know, very spiky and I became another woman in a way. So it manifested itself mostly like that,” she told The Guardian.

“We felt like we had something so valuable in the group that, even though it was difficult, we didn’t want to break that up,” Benny Andersson said. “And to prove it, we did some of our best stuff after that.”

They released a new album, The Singles – The First Ten Years, with all their best hits, alongside two new songs. But as New Years Eve that year drew closer, ABBA decided to take a break.

It marked the end of the successful group, however, after nearly 40 years the group is set to release new music in early September.

“It’s not a case any more of it might happen, it will happen,” Bjorn Ulveaus told The Herald Sun earlier this year.

So what did Frida Lyngstad do after ABBA? Well, she actually released her first Swedish-language solo album named Frida Alone already in 1975.

Disappeared from the spotlight

At the time she had also reunited with her father, Alfred, who she got in touch with her through a German pop magazine named Bravo.

In 1982, Frida released her first solo album post-ABBA. Something’s Going On was produced by Phil Collins, and two years later, the album Shine was released.

Following those albums, Frida decided to withdraw from the spotlight. It wasn’t until in the 1996 that she released her next album, Deep Breaths, but to this day, that is the latest solo album she released.

At that time, Frida Lyngstad had also begun devoting her time to environmental issues, and up to this day, she’s still very much involved in charity work.

Through the years, she’s appeared on several albums, with her latest recording being a Spanish version of Andante, Andante, together with Arturo Sandoval, which was released in 2018.

Together with Agnetha Faltskog, the two created magic on stage. But speaking in 2010, Frida Lyngstad said that they didn’t have any plans on reuniting.

“We talk and laugh about it sometimes, but life is changing, we’re getting older and there are so many other things that may be more important and which take up our time,” she said.

“There is such a fascination and curiosity that we could never do something simple and low-key, just because of that I do not think it will come off.”

In 2016, the ABBA members reunited once again. During a private gala to mark 50 years since Björn Ulvaeus and Benny Andersson met for the first time, Frida and Agnetha performed the song “The Way Old Friends Do” together– and it sure was magical!

Now, Frida Lyngstad lives a calm and low key life outside of the spotlight. But also, she’s been through the worst possibly thing that can happen to a mother and wife.

In 1998, her daughter passed away following a car accident, and a year later, her third husband, Ruzzo Reuss von Plauen died.

“It was an indescribable sorrow,” she said. “You feel like you barely can survive it. When my daughter and husband passed, I felt like I was forced into believing in something else. Otherwise, it would’ve been very hard to get through it.”

“It took many many years of indescribable sorrow. I haven’t spoken about it for a long time, it was a tough journey.”

Together, they live in the small alpine village of Zermatt in Switzerland. The now 75-year old singer visited the popular winter paradise for the first time in the 1970s with her then husband Benny – and fell in love right away.

“Henry is my supporter, my friend and my love. I hope it will remain that way.”

Now, Frida has focused more on her past. At the time, she’s writing about her life.

“It might be a book, a musical, a movie, I don’t know yet,” she told Swedish news outlet Damernas Varld. “I’ve written plenty throughout my live but never a book. It was easy at first, but right now, I’m at a dead end.”

Anni-Frid “Frida” Lyngstad became one of the greatest singers in the world. And still to this day, her voice is pure magic. We are so happy to see that she’s doing fell despite her many tragedies in live – and wow, doesn’t she still look amazing!