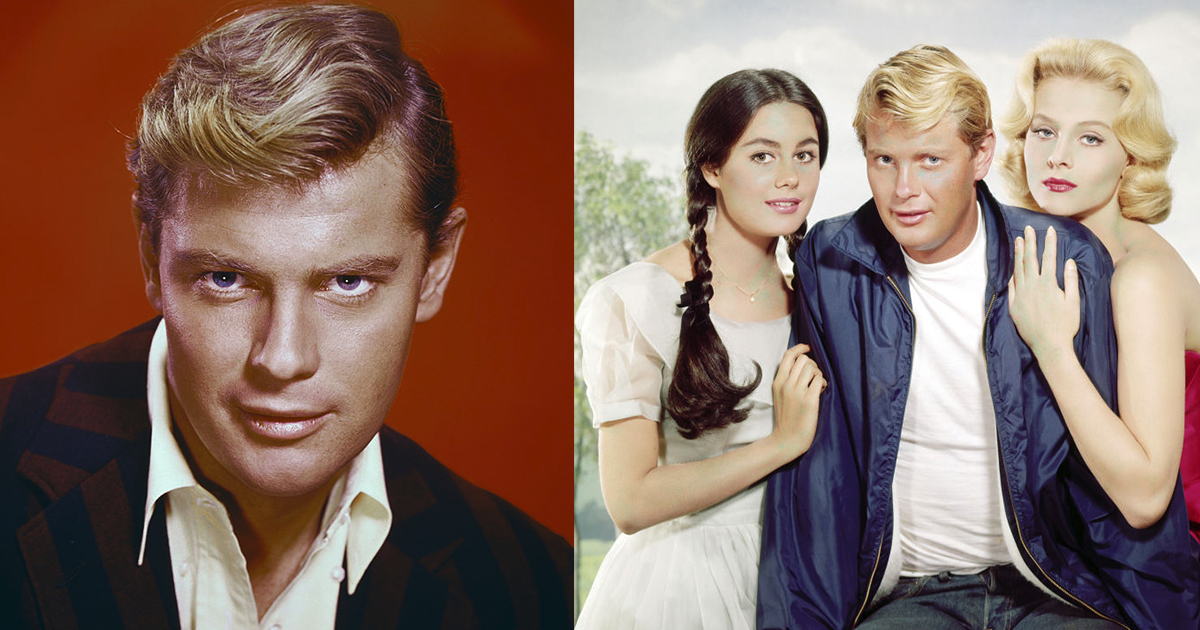 Troy Donahue was a popular actor and musician in the 1950s and 1960s, known largely for his physical appeal.

But the pressure of his fame and fans would plague the actor throughout the majority of his life.

Sadly, his life and all the tragedies would eventually culminate in a completely unsuspected surprise…

I remember Troy Donahue, every time I hear the song ”Summer Place,” I think about him – and how as a child, I watched the movie in the theater. Wow, I thought he was good-looking!

To many of us, Troy Donahue was the picture of American beauty in the 1950s and 60’s: young, blond, blue-eyed, and handsome, the actor’s appearance attracted countless young female fans.

Though only a star in Hollywood for a handful of years, his name is still recognizable to most – even though some might have forgotten him.

Despite this fame, he was apparently not compensated well. His life slowly descended into chaos, and his spiral was only stopped when he met his teenage son.

Donahue was born in New York City under the name Merle Johnson. Influenced by his mother, a stage actress, the boy desired to be an actor at a young age. In a 1984 interview with People magazine, he shared:

”I can remember always being exposed to Broadway and theater people. I can remember sitting with Gertrude Lawrence while she read her reviews in ‘The King and I.’”

He eventually attended Columbia University for journalism but kept his passion alive by acting in stock productions. As he hit screens for the first time, he already had a new name, an agent, and studio executives.

”At first, they had Paris, the lover of Helen of Troy in mind. But I guess they thought they couldn’t name me Paris Donahue because there was already a Paris, France and Paris, Illinois,” he said.

Eventually, the actor made his film debut in Man Afraid. Only two years later, he signed on with Warner Bros – the company which saw his true potential.

”They’d asked me to light a cigarette, and when I did, they screamed and fell down,” Troy recalled.

In 1959, he starred in A Summer Place, the film that skyrocketed him into stardom and made him a hot commodity.

Often playing a good guy cast beside an attractive blonde female, Donohue experienced a fast transformation into a teen heartthrob. Despite this fame, he did not do well financially.

”I was living like a movie star but wasn’t being paid like one,” he revealed and added: “I lived way over my head and got into great trouble.”

Troy Donahue and Sandra Dee were a great romantic movie couple in the late ’50s. Throughout his career, Troy was married four times.

His first marriage was with Suzanne Pleshette, followed by Valerie Allen, Alma Sharpe, and Vicky Taylor, all of which ended with a divorce.

As his love life continued to decline, he began to suffer and turned to several substances. His unhealthy habits didn’t help his acting career either.

”I was loaded all the time. I’d wake up about 6:30 in the morning, take three aspirins mixed with codeine, slug down half a pint of vodka, and then do four lines of cocaine,” he shared.

But Donahue always maintained that his addiction never tainted any sets he worked on, claiming he was never drunk or otherwise impaired while working. His career was, according to the actor, not the reason he began drinking in the first place.

He first drank in the seventh grade while studying for an exam. This developed into a habit that grew with time and that nearly destroyed his future.

At one point, as a young man, he was reportedly living in the bushes at Central Park, keeping all of his belongings in a backpack.

The addiction continued throughout his career and only stopped after his fourth failed marriage. It was at this point that the actor decided to get sober, seeking professional help in May of 1982. He explained:

”I look upon my sobriety as a miracle. I simply do it one day at a time. The obsession to not drink has become as big as the obsession to drink. I was very fortunate.”

It was shortly after this sobriety journey began that Donahue ran into an old flame from Los Angeles. As they caught up, the woman pointed to a thirteen-year-old boy, telling the actor that his name was Sean and that Sean was his son.

Knowing the timeline made sense was not the only reason Donahue believed her straight away–he also immediately saw himself at a young age in the boy.

Thankfully, the father and son immediately got along. Sean’s mother never asked for child support, and the two parents arranged visitations so that Sean could get to know his father. Donahue had been kept from his biological son previously because of his battle with drugs and alcohol taking over so much of his life.

His addictions had an impact on his career, as well. Around this time, he was no longer getting offers for big-budget roles, instead acting in films such as Cry-Baby, Bad Blood, and Assault of the Party Nerds.

In 1998, Donahue said in an interview that this turn towards B-films was not concerning to him. He felt his career was approaching its end, and he viewed himself as a talented actor despite naysaying critics.

Only a few years after this interview, in 2001, Donahue died of a heart attack at age 65.

Since getting sober, he had maintained a healthy lifestyle and a strong relationship with the son he found late in life.

Troy was a gorgeous-looking kid, no doubt about that, and he was very likable on the screen! I’m sorry to hear about all his struggles – but hopefully, he will never be forgotten! Thank you for all the memories, Troy!