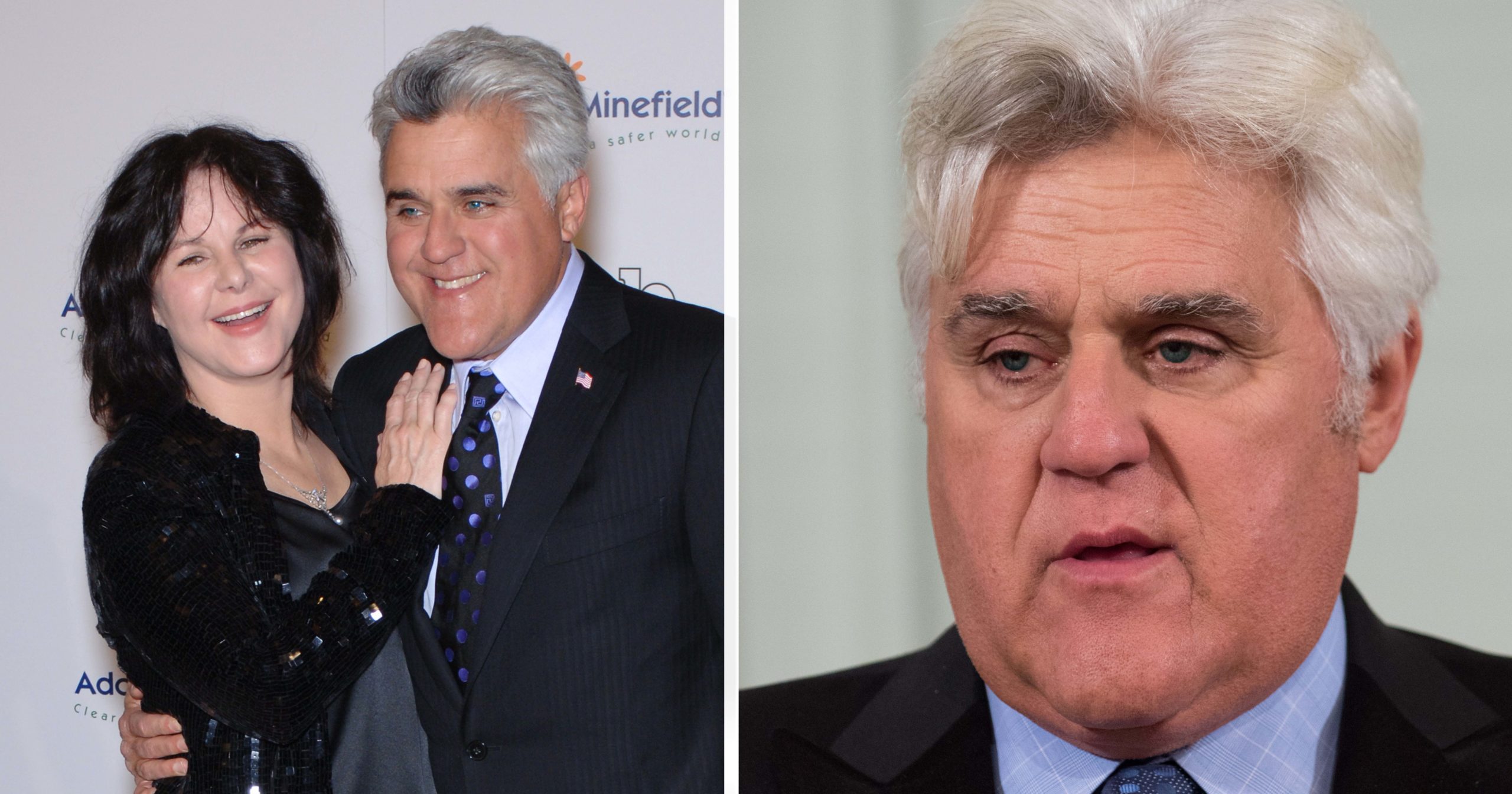 Jay Leno reigned as the king of talk show hosts for decades. In 2014, he finally decided to step down and retire from his show, instead focusing on living a peaceful life with his wife, Mavis.

Jay and Mavis married back in 1980. Still to this day, their love is strong. The couple, however, have curiously never had children, and it turns out they have a strong reason for that.

So how did Jay Leno turn into a celebrity star television host? And what’s the secret behind his and Mavis’s love? Here’s all you need to know!

Jay Leno is undoubtedly one of the most popular television hosts of all time. Alongside legends like Dick Van Dyke, Johnny Carson, Jon Stewart, and David Letterman, the New York native forged himself a television empire in California, reigning at the top of show business for decades.

As of today, Leno is taking it easy. He reportedly has a great interest in cars and motorcycles. At the same time, not working as a television host means having more time over for his wife and the love of his life, Maples Leno.

Of course, becoming a legendary television host didn’t happen overnight for Jay Leno. That said, it seemed like he was always destined to become one of the greatest.

So how did it all happen? Here’s all you need to know!

Jay Leno was born on April 28, 1950, in New Rochelle, New York. His father, Angelo, worked as a salesman. His mother, Cathryn, was a homemaker.

For a long time, Jay planned to follow in his father’s footsteps and pursue a career in sales. However, that would all change when he became a real funny guy at school.

Leno grew up in Andover, Massachusetts after his family left the New York area when he was young. He loved performing pranks and practical jokes in school – his fifth-grade teacher even noted as much in one of his report cards.

“If Jay spent as much time studying as he does try to be a comedian, he’d be a big star,” Leno recalled.

It turned out that his teacher had it right. In fact, Leno praised his teachers for being supportive, planting a sort of seed for his future career.

“I had wonderful teachers, I would not be in show business without them,” Leno recalled.

“I remember Mrs. Hawke, my English teacher, who said to me, ‘You know, you’re always telling jokes in the hall, why don’t you write some of those stories down and maybe you can tell them to the class?’ It would have never occurred to me to do that because that just seemed like homework.  And for the first time in my life, homework was actually enjoyable.

“I’d write something down, and then cross it out, saying now that doesn’t sound right and then write it again,” he added. “And then she’d have me stand up in front of the class and have me read these stories and I realize now that they weren’t very good, but at the time I got a few laughs and she said, ‘Maybe you could be a comedy writer or something like that.’

“It was an eye-opener. It was something I’ve always been grateful for.”

Pursued his career as a comedian

Jay Leno studied at Emerson College in Boston, graduating in 1973 with a Bachelor of Arts degree in speech therapy. At the same time, he had set his sights on a career as a comedian. While studying, he began traveling from Boston to New York City to do different auditions.

Leno got a shock upon arrival there when he saw that there were no end of singers, dancers, and comedians waiting in line all day to get a chance to prove their talent.

He was persistent, though, and decided to not leave. As history tells us, that was a wise choice indeed.

“It would be around an hour after I got in line that someone would say, ‘Screw this,’ and leave.  And I’d go, ‘Oh, good’ and move up.  I got in because I just stayed there.  I focused on that,” he recalled.

“I’d wait for the other people to get tired, get hungry, to have to go to the bathroom, to have to go somewhere, and they would drop out, and I would move up, and that always worked.  To this day, it still does. You just hang in there.”

Leno pursued his career as a comedian, landing gigs at Boston venues such as Ding Ho and The Comedy Connection. At the same time, he worked at a car dealership to make money.

Then, in the 1970s, Leno decided to leave Boston for the West Coast to write for the television series Good Times. There, he worked alongside future television host David Letterman, and also served as a warm-up act for artists such as Tom Jones.

Leno quickly became a very well-respected comedian. Since he also was inside the television arena in his capacity as a writer for Good Times, he soon earned his big chance.

In 1977, he appeared on The Tonight Show for the first time. Later on, he became a regular on other shows such as Billy Davis Jr. Show.

Things were going great for Leno, and he got his own comedy special on television in the mid-1980s with Jay Leno and American Dream. At this point, he started appearing on his upcoming television rival David Letterman’s show, Late Night.

In 1987, Jay Leno signed to NBC, making him one of two permanent guest hosts on The Tonight Show. Not long after that, he became the only guest host.

Leno’s popularity only grew, and in 1992, he took the next big step in his career when the legendary Johnny Carson made the decision to retire from his show. Speculation insisted that David Letterman was going to take over – however, NBC chose Jay Leno.

Of course, it was an amazing job for Leno, though extremely tough in the beginning. But – just as in the queue when auditioning in New York – Jay Leno was determined to succeed.

“When I first began hosting The Tonight Show, the audience didn’t exactly love me,” he explained.

“I used to pack up my things every night and take them home – I didn’t know if the show would be mine the next day. I worked hard, I put my nose to the grindstone, and it was fun when we were able to turn the show around. When I finished, we were No. 1.”

Though many thought Letterman would have a shot at the job Leno got, it appears that everything had been predetermined. That at least according to NBC’s former Vice President, Rick Ludwin.

Speaking on CNN’s documentary series, The Story of Late Night, Ludwin explained that Leno had a secret deal with NBC.

“Jay Leno had just signed a new deal that guaranteed Jay The Tonight Show, whenever Johnny [Carson] stepped down,” he said.

“Dealing with Dave had become bothersome and draining, and he could be unnecessarily rude to network people — not just me. So did that factor into my decision as to go with Jay Leno over Dave Letterman? You bet it did.”

Just a year after his first permanent show, Leno renewed his contract for five more years, earning $40 million in the process. Five years later, it was renewed once again, with the host raking in a staggering $100 million dollars.

These days, Jay Leno has a net worth of around $450 million dollars, according to Celebrity Net Worth.

Not only were NBC and their viewers happy, but Leno was also awarded an Emmy for Outstanding Variety, Music Or Comedy Series in 1995.

In 2013 – after a short break in 2010 – Leno announced that he was planning on retiring from The Tonight Show. Instead, Jimmy Fallon took over, and Leno once again returned to his passion for stand-up comedy, performing at several charity events. He also launched the series Jay Leno’s Garage, showing off his great love of cars and motorcycles.

In the process of creating his television empire, Leno also met the love of his life; he’s been married to his beloved wife Mavis for over 40 years.

The couple met for the first time in 1976 when Leo was performing at The Comedy Store in Los Angeles.

“I don’t remember the day. But at the time I thought, ”Holy s–t! That comedian is gorgeous,'” Mavis told the Los Angeles Times.

“I had gone to the Comedy Store with my girlfriend because I was writing comedy with some partners. Friends kept saying, ‘You have to hang out at the Comedy Store and The Improv you’ll meet people who can give you jobs. The first time I went, they sat us front row center that means you’re this far from the comic. And there was Jay.”

Why Jay Leno doesn’t have children

The couple started dating and then tied the knot four years later. At the time, Leno had just bought a house and couldn’t afford an engagement ring. Mavis got one years later, though the couple have insisted they didn’t marry solely for love.

It turns out that Leno had his own insurance policy – and wanted it to include Mavis in case something happened to him.

“I always tell people that you should marry the person you wish you could have been. That’s a pretty good goal,” Leno said in a Wall Street Journal Q&A. “The secret to a long marriage is realizing there’s nothing really worth fighting about.”

Speaking to Today, Leno further said about his marriage: “I’m in show business, which is a selfish profession, so I married a woman that works very hard for women’s rights and other issues like that and it balances out.”

Mavis Leno does plenty of philanthropy work with many different charities. At the same time, she and her husband have a lot of free time since they never had children. So why is that?

Speaking with the Washington Post, Mavis says she takes full credit for the couple not having children. For her, it was all about a fear of being trapped. In fact, it was a television show – The Honeymooners – that ultimately led her to make her mind up about children.

“I would see a young woman who was very attractive and a thousand times smarter, and she’s living in this little tenement hovel with her husband, Ralph, and then this Ed Norton, who has an even hotter wife,” Mavis explained.

“These men spend all their time talking about what a drag the wives are and asking how can they get away from them. It’s perfectly obvious the women are the ones trapped.”

“I remember telling my mother when I was 7 or 8 that I was never going to get married or have children,” she continued. “To me, this is the way women get caught.”

Interestingly, the idea of not getting married change after she met Jay Leno in the 1970s.

“He is probably the single kindest human being I ever met,” Mavis said.

Jay Leno and his wife Mavis seem to have the most amazing marriage. We wish them all the best in the future – hopefully we’ll see Jay in front of the camera soon again.