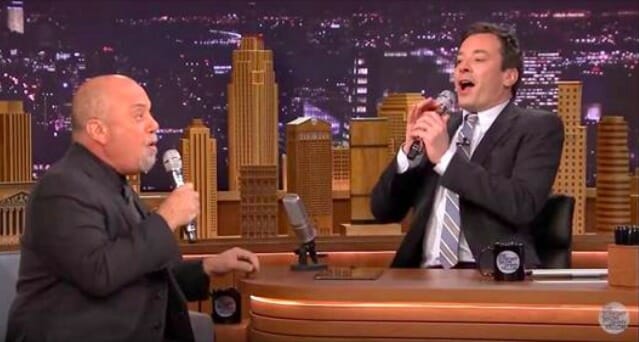 When I was a little girl, one of me and my sisters favorite pastimes was to sing together. Scratch that. To perform little ‘musical masterpieces’ together.

The four of us would gather around and one person would launch the first sound — from a tap on the kitchen table to a low hum, to essentially anything else that came to our mind in the spur of the moment. Then, the rest of us would gradually join in.

It was so much fun and always ended with us laughing hysterically at whatever we came up with.

This performance from Jimmy Fallon and Billy Joel immediately brought a big smile to my face — and certainly brought me back to my childhood.

It begins much in the same way things went with my sisters: Jimmy launches the first sound, and it slowly escalates as Billy Joel gradually joins in.

The goal is to sing the legendary song ‘The Lion Sleeps Tonight’. The legendary song was originally recorded back in 1939 by South African musician Solomon Linda under the name ‘Mbube’. It was written in Zulu, and later rewritten in English by American songwriter George David Weiss.

That’s when the song really took off. It was adapted and covered internationally by loads of bands in the 50s and 60s.

But perhaps its most successful interpretation of all occurred in 1961, when it became a number one hit in the US after the doo-wop group The Tolkens produced their catchy version. This is the version Jimmy Fallon and Billy Joel sing in their amazing performance.

And what’s certain is they do a fantastic job at it. Billy, of course, is a seasoned singer and it was expected how well he would do, but kudos to Jimmy who proves he has some decent musical skills, too!

Watch their wonderful, harmonious performance below.

This made me smile till my cheeks hurt. Share with all your family and friends if this brought a smile to your face today, too!