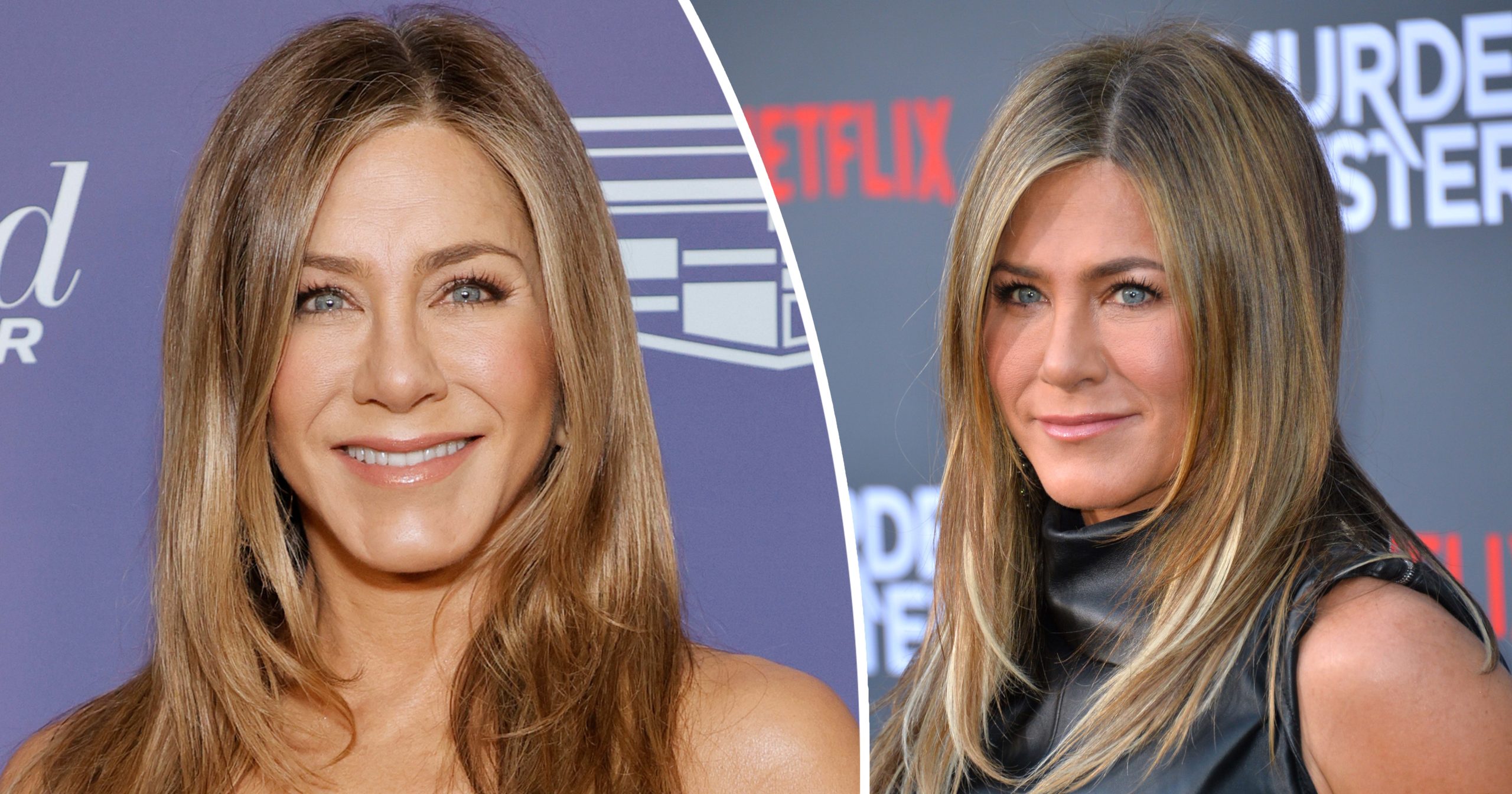 Jennifer Aniston became a worldwide celebrity after starring as Rachel on Friends. She hit what some people call “Hollywood Gold” with the show; today, the 53-year-old is still going strong in the business.

As a former Friends cast member, the risk of becoming typecasted was high. However, Aniston managed to get out of the “Rachel” bubble. Now, she’s been getting a lot of recognition for her performance in the drama The Morning Show.

At the same time, as Jennifer Aniston’s career went straight to the top, rumors of her getting plastic surgery surrounded her. Therefore, she decided to speak out about it, revealing the truth as to why she actually went under the knife. Here’s all you need to know about the actress!

Born on February 11, 1969, in Sherman Oaks, California, entertainment was already heavily in Aniston’s family. Her father, John Aniston, was a massive star on soap operas, and her mother, Nancy Dow, was a prominent actress.

Aniston mainly grew up in New York, and things seemed to be good. But at nine years old, something happened. Suddenly, her dad walked out and left his wife with Jennifer and her brother John.

Jennifer Aniston’s relationship with her father shifted back and forth. But even though Aniston’s father left her, her brother, and her mother, she didn’t hold any grudges toward him.

“There are people in my life that are like, ‘How do you even talk to that guy?’ But what’s the point of holding on to [anger]? That’s so toxic,” she told the Hollywood Reporter in 2015. “We’re human beings. Human beings make mistakes. Human beings are not perfect. And by not forgiving someone, it’s not allowing human beings to evolve and become better people.”

Jennifer Aniston is a well-respected, appreciated co-worker and a very happy person. That, according to herself, is grounded in her childhood, despite it being something very different.

When Sandra Bullock interviewed Jennifer Aniston for Interview Magazine, she stated that the Friends star “really have a way of pushing joy and positivity.” She asked Jennifer, “what is it that allows you to stay buoyant and keep from getting discouraged when things don’t go the right way?”

“I think that it comes from growing up in a household that was destabilized and felt unsafe, watching adults being unkind to each other, and witnessing certain things about human behavior that made me think: “I don’t want to do that, I don’t want to be that,” Aniston said.

Jennifer Aniston as Rachel on ‘Friends’

Jennifer Aniston wanted a career as an actress as well. She attended Fiorello H. LaGuardia High School of Music & Art and Performing Arts in New York City, where she was active in the drama division.

After graduating in 1987, Jennifer Aniston headed straight to Hollywood to pursue her dream career. At the beginning of her career, she starred in numerous television series, including Molloy, Ferris Bueller, and The Edge, and it seemed like she was heading in the right direction. But Jennifer Aniston didn’t realize that her most significant project was just around the corner.

In 1994, Aniston was cast in the brand new sitcom Friends. The show was about six friends living in New York City, and right from the start, it was a huge success.

Aniston starred as the spoiled Rachel, who bravely decided to leave her family’s money behind and start her new life with newfound friends in the city. The show ran for ten years and 236 episodes, all shot at the now-iconic stage 24 at Warner Brothers Studios in Burbank, California.

More than 50 million American viewers watched the finale. Jennifer Aniston – alongside Courtney Cox as Monica, Lisa Kudrow as Phoebe, Matt LeBlanc as Joey, Matthew Perry as Chandler, and David Schwimmer as Ross – became a superstar through her performance.

Friends became a phenomenon, and Aniston, alongside her co-stars, was paid generously. In the final seasons, it’s said that the cast earned a staggering $1 million per episode.

This is how much money the ‘Friends’ cast still earns today

Still to this day, even though it’s been 19 years since the last episode aired, the cast is said to earn about $20 million per year just for the reruns. That’s because they get two percent of the show’s syndication revenue, as reported by The Independent. In addition, Netflix reportedly paid $80-$100 million just to keep the show on its platform through 2019.

When looking at the characters on Friends, they were all iconic in their own way. Aniston’s character Rachel was the one that made the most significant transition throughout the show, turning into a fashionista working at Bloomingdale’s.

Further, Friends had a massive impact from a cultural perspective, with Rachel’s haircut becoming very trendy, radio playing the theme song over and over again, and everyone trying to deliver a punch-line just like the character Chandler Bing.

Besides becoming a star, Jennifer Aniston earned a Primetime Emmy Award in 2002 for Outstanding Lead Actress in a Comedy Series for playing Rachel Green on Friends.

In 2003, she also won a Golden Globe Award for Best Performance by an Actress in a Television Series – Comedy or Musical.

Sure, Jennifer Aniston became famous worldwide, but the most crucial part was that she got five great friends for life.

“We really did have so much fun together,” she told the Hollywood Reporter.

“I remember that was one of the things when we were young and dumb and renegotiating, one of the [studio’s] threats was, ‘Well, we don’t need all six of you. We can do this with four of you.’ We were like, ‘What? You can? You can get rid of Rachel or Joey or who?’ Then it was like, ‘No they can’t, wake up.'”

Last year, the six stars from the show reunited for the HBO Special Friends: The Reunion. Even though it was a memorable night for the cast members and fans, emotions were high. Jennifer Aniston had to step off the set several times because it became too emotional.

“I think we were just so naive walking into it, thinking, ‘How fun is this going to be? They’re putting the sets back together, exactly as they were.’ Then you get there, and it’s like, ‘Oh right, I hadn’t thought about what was going on the last time I was actually here,'” Aniston explained. “And it just took me by surprise because it was like, ‘Hi, past, remember me? Remember how that sucked? You thought everything was in front of you and life was going to be just gorgeous, and then you went through maybe the hardest time in your life?'”

“It was all very jarring, and, of course, you’ve got cameras everywhere, and I’m already a little emotionally accessible, I guess you could say, so I had to walk out at certain points,” she added. I don’t know how they cut around it.”

Ever since Friends, Jennifer Aniston has continued to have a great career. She’s starred in many films, including Horrible Bosses and Cake, and as of the latest in the drama series The Morning Show, alongside Reese Witherspoon.

After its first season, the show was nominated for seven Emmys, winning one. In addition, Aniston received a nomination for Outstanding Lead Actress in a Drama Series.

According to Celebrity Net Worth, Jennifer Aniston has a net worth of about $300 million.

As she became one of the most famous actresses through her role as Rachel on Friends, fans and the media became very interested in Jennifer Aniston’s personal life. Between 2000 and 2005, she and Brad Pitt were regulars in the paparazzi press, as they had a five-year marriage. In 2015, she and actor Justin Theroux tied the knot. But unfortunately, they divorced just three years later.

Aniston’s divorces were very public. She’s not been involved in a relationship for several years. However, now she says that she is ready to find true love. But it doesn’t have to be in Hollywood.

“No one of importance has hit my radar yet, but I think it’s time. I think I’m ready to share myself with another,” she told SiriusXM in September 2021, adding in an interview that she’s not seeing herself walking down the aisle again.

“It’s not on my radar,” Aniston said. “I’m interested in finding a fantastic partner and just living an enjoyable life and having fun with one another. That’s all we should hope for. It doesn’t have to be etched in stone in legal documents.”

Today, many people find love through dating apps, not necessarily in the traditional way. But for Jennifer Aniston, dating apps aren’t an option.

“Absolutely no,” she told People. “I’m going to just stick to the normal ways of dating. Having someone ask you out. That’s the way I would prefer it.”

Jennifer Aniston looks fantastic for her age. But, because of her striking looks, fans instantly started questioning whether or not Jennifer had gone under the knife and undergone plastic surgery over the years.

Aniston’s Friends colleague and god friend Courtney Cox previously revealed that she had undergone several procedures. However, later on, she decided to take out all her botox.

So what is really the truth regarding Jennifer Aniston and her rumored procedures? Well, in fact, she has been under the knife.

In 2018, the 53-year-old’s representative revealed that the 53-year-old actress had undergone rhinoplasty surgery to “correct a deviated septum that was incorrectly done over 12 years ago.”

Speaking to People back in 2007, Aniston talked about the decision to fix her nose.

“It’s funny. I had [a deviated septum] fixed – best thing I ever did. I slept like a baby for the first time in years,” she said. “As far as all the other [rumors], as boring as it sounds, it’s still mine. All of it. Still mine.”

“I am not injecting s—t into my face”

A year earlier, in 2006, Jennifer Aniston revealed more details about her rumored procedures. She confirmed that she has never had breast implants or a breast enhancement-

“No boob job! You know what it’s called? It’s called 10 pounds,” Aniston said. “Here’s what it is, this is the funny thing, you’re either, ‘Oh, look at the bump,’ and they circle the bump and there’s an arrow. But instead, it’s like, you know, maybe a couple of cheese plates too many.”

Moreover, Jennifer Aniston has previously spoken about the stigma surrounding the fact that people in Hollywood age. She believes it’s only natural – and says she’ll never inject anything into her face.

“There is this pressure in Hollywood to be ageless. I think what I have been witness to, is seeing women trying to stay ageless with what they are doing to themselves. I am grateful to learn from their mistakes because I am not injecting s—t into my face,” Jennifer Aniston told Harper’s Bazaar Australia.

She added, “I see them and my heart breaks. I think, ‘Oh god, if you only know how much older you look.’ They are trying to stop the clock, and all you can see is an insecure person who won’t let themselves just age.”

Do you agree with Jennifer Aniston’s thoughts on aging or not? Please share this article on Facebook with friends and family and let them know your opinion!