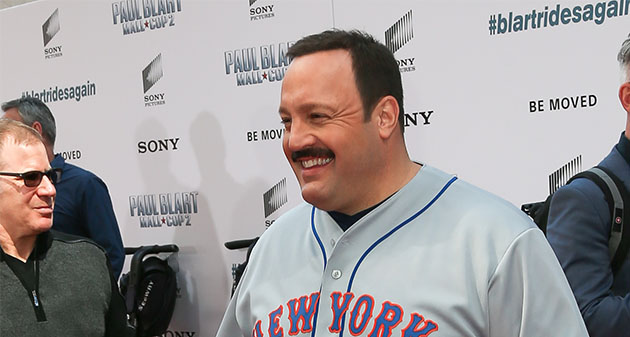 Losing weight isn’t something that’s done overnight. It takes plenty of work, dedication and commitment, but in the end, it’s all worth it. And one person who’s done an amazing job is actor Kevin James.

The King of Queens star was cast in the film Here Comes the Boom in 2012, starring as a boxer, and had to get in shape.

Over the course of a number of months, James lost more than 80 pounds. And it was hard to even recognize him from his former self. What an inspiration!

Kevin James has had a pretty impressive career. The former college football player turned to comedy and standup, before getting the role that changed his life forever.

Even though an impressive career is very cool, there are other things that we want to tell you about Kevin. The last few years have been special, and after his weight loss of 80 pounds he looks like a new person!

So how did Kevin James even become the great actor he is today? This is all you need to know about him!

Kevin James was born on April 26, 1965, in Mineola, New York. He grew up on Long Island, and went to Ward Melville High School.

As a young kid, Kevin James had a huge passion for sports. He played tailback for his high school football team and continued his football career at SUNY Cortland after graduating in 1983.

He majored in sports communication at SUNY Cortland, but never graduated, with 15 credits shy of a degree. At the same time, however, he had found his true passion in life. It wasn’t football – it was comedy.

“I came home one summer and wanted to do something different,” Kevin James told the New York Times. “So I tried out for a small community theater play out in Shoreham-Wading River, and I got a small comedic part. I had no idea how to act, but I just did it. And i fell in love with the live audience response.”

James was totally hooked on comedy and acting. He couldn’t take his eyes off the stage, but it wasn’t quite an instant success.

He spent around 10 years at the Long Island comedy club circuit as he was trying to make a living. At the same time as he was performing he was living in different apartments in New Hyde Park, Roslyn and Huntington, and worked at an industrial supplier’s warehouse to make rent.

In 1989, Kevin James’ career took a turn for the better. He was offered his first solo gig at the East Side Comedy Club, and it was “fantastic.”

“I didn’t stack the audience with friends, because I knew they wouldn’t give me a true reading,” he said. “But the audience response was incredible, and I thought, ‘This is really easy.’ Then I went on a second night with the exact same material. And I bombed.”

Kevin James’ second night was a huge failure, and right there and then, he actually could’ve quit comedy for good. But in the end, he didn’t, and that was sure the right move.

His comedy career was on the rise, and once James established himself, he became a frequent comedian on several late-night talk shows, including The Tonight Show with Johnny Carson.

In the 1990s he developed a great relationship with the actor Ray Romano, and made several appearances on the sitcom Everybody Loves Raymond.

Romano thought James was great, and at one point the two started writing a script in which Kevin James was the series lead.

In 1996, CBS released the first season of The King of Queens. Kevin James became the lead star. But in the beginning, he really didn’t feel like he was a star at all.

In fact, James thought he was a “weak link”

Kevin James – ‘The King of Queens’

“I was definitely the weak link for sure as far as acting was concerned on the show,” he told Philly Voice. “Leah (Remini) and Jerry (Stiller) had done a crazy amount of things. Leah had done so much stuff. It was my first gig. I learned a lot through it.

“I told him that I didn’t think he could do it. I didn’t think he had the ability to perform that way and I was so completely wrong. It was his unique style that was used from stand-up that made him so special in that show. I learned a lot from that, I really did. I just kind of watched his show, which came out two years before I did my show, I really went to school on that. He shocked everybody. It was clumsy in the beginning. He went his own way with it.”

Being on a sitcom compared to filming a movie is quite different. Usually, it’s all filmed on a set on a studio lot. It was a different experience for James, and he struggled at the beginning of the series.

‘”Your head is blocking the camera.’ I would be facing upstage instead of downstage. I still don’t know what upstage is,” Kevin James said of the first time being on the The King of Queens set. “You’re learning all that stuff. I would be looking at my marks as I was walking through. I had to step there, all the stuff an experienced  actor knows.”

The King of Queens ran from 1998 to 2007. In 2004, James was nominated for a Primetime Emmy for Outstanding Lead Actor in a Comedy Series, and the series led to several other roles.

James appeared alongside Will Smith in the 2005 movie Hitch, and later he shared the screen with his friend Adam Sandler in I Now Pronounce You Chuck and Larry as well as the two Grown Ups movies. He also appeared in Zookeeper and the 2009 hit movie Paul Blart: Mall Cop.

James has starred in several television series including The Crew and Kevin Can Wait. His departure from television following the cancelation of The King of Queens wasn’t all because he felt he wanted to do something else, but rather that he felt that he could be more creative working with films.

“The one thing about TV, you’re playing the same character every week,” James explained in 2014. “But it’s exciting, I’m still excited to do it. One day I would love to go back to it. We’re working on developing something now, and if it works out, that’s great, and if not, that’s fine too. You just gotta keep a lot of plates spinning.”

While Kevin James developed himself as a great television actor on The King of Queens, he also found the love of his life and grew into a family man.

In 2001, he and model and actress Steffiana de la Cruz met on a blind date. The couple dated for two years before James proposed. In 2004, the couple tied knot at St. Edward Catholic Church in Dana Point, California.

Today, the couple have four children, with their eldest daughter Sienna Marie James being born in September 2005.

“I just love being a dad and spending time with my wife and child, and now we’re having another girl. It’s incredible,” Kevin James told People in 2007.

Besides being a loving family at home, Kevin James and his wife Steffiana have worked together on plenty of films, including The King of Queens, Paul Blart: Mall Cop and Zookeeper.

Kevin James has always been a rather big guy and he hit his all-time weight of 290 pounds. But things started to change once he got starred in the film Here Comes the Boom, where he was playing a high school science teacher who turns into a mixed martial arts fighter to rescue his school’s evaporating arts budget.

Beforehand, it was clear that James had to loose 80 pounds in order to develop the stamina to go several rounds in the ring. And also, to develop muscles that would be MMA-worthy.

On The King of Queens set, James had met MMA trainer Ryan Parsons. And for the film, James asked him to be his trainer, and to treat him just like if he was actually going to go a real fight.

“That’s the key to a successful workout for anyone,” Parsons said. “You have to know why you’re doing what you’re doing and have a goal in mind, or it’s just too easy to quit.”

“Kevin wanted to be treated like a fighter, so that’s what we did,” he added. “These guys didn’t care he was a movie star. They went at him. He actually knocked a guy out.”

James started working out, and it wasn’t the easy, calm workout you could imagine. Even though he had a busy schedule he was determined to lose weight, and even though he was travelling, nothing stopped him.

His hour-plus-long-workouts consisted of running up and down hotel stairs or running through a town he was passing, and when in the gym, the intensity was turned up a notch.

James did a “steady diet” of pushups and situps with a medicine ball as well as plenty of 1-hour boxing workouts. He practiced worked on his boxing, kickboxing, wrestling, and jiu jitsu skills, while also sticking to a low-carb diet.

And looking at pictures from the film, it sure was an incredible transformation!

It’s been some years since the film premiered, and today, James has once again put on some weight.

“I got into such good shape for the movie, for me — losing 80 pounds — so I was able to do all of those scenes in the ring without sustaining any injuries, he said. “But two days ago, now that I’m out of shape again, I threw my back out getting into a car. Throw me all over the place in the Octagon and I’m fine but get me to turn my head while I’m getting in a car and I go down.”

“I want to get back in shape, bad. I felt better, my clothes fit me, my mind was clearer,” James added. “But it’s a very difficult thing to sustain. I was working out all the time when I was getting ready for the movie.”

Even though Kevin James might not be in the same great shape as he was for the boxing film, his weight loss journey is a true inspiration to all. The well-respected actor and comedian has proven that nothing is impossible if you do it with dedication as well as strength.

In the end, it’s all about feeling good about yourself. And we sure hope that Kevin James is doing just that.

Losing as much weight as Kevin James did isn’t something that you do over night. It takes hard work and dedication. He is a true inspiration that anything is possible!