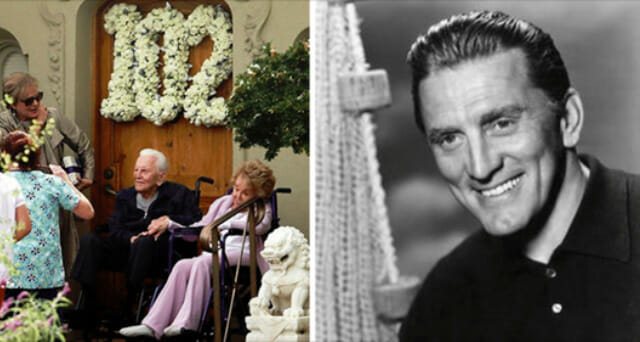 Lasting love may sound like something out of fairy tales these days — and this rings especially true when we think about Hollywood couples.

But there are some that do indeed display it in real life — and Kirk Douglas and his lovely wife Anne Buydens are a prime example.

The two inseparable lovebirds have been married for a stunning 64 years and recently celebrated Kirk’s 102nd birthday.

Kirk Douglas is one of the last surviving stars of Hollywood’s Golden Age. His career spans decades and his talents stretch to producer, director and author with ten novels and memoirs to his name.

Kirk’s loving family made sure to celebrate the legendary actor’s 102nd birthday and paid tribute to him on social media.

Acting runs in the Douglas family, with eldest son Michael Douglas perhaps the best known of Kirk’s four children. Michael’s wife, actress Catherine Zeta-Jones, took to her Instagram account to wish her father-in-law all the best on his birthday.

She paid a moving tribute to the legendary Hollywood star, recently posting a video of him on her Instagram account, dancing with her son Dylan. Meanwhile, her daughter Carys plays the piano and sings ‘Beautiful’, by Christina Aguilera.

“Happy 102nd birthday to the most beautiful man. We love you Kirk,” she wrote beneath the video.

Happy 102nd birthday to the most beautiful man. We love you Kirk.

Meanwhile, Kirk’s grandson Cameron Douglas also honored his grandad’s birthday via social media. He posted a throwback photo of the two of them, captioning:

“Happy Birthday to a gentleman’s gentlemen, with a true heart of gold ? We Love you Pappy! #102″

Happy Birthday to a gentleman’s gentlemen, with a true heart of gold ? We Love you Pappy! #102

Last year, Michael Douglas honored his father in an emotional speech as he received a star on the Hollywood Walk Of Fame.

“My dad is here,” he said. “In a month, Kirk will be 102 years old! It means so much to me, Dad, that you’re here today. Thank you for your advice, inspiration, and I’ll say it simply and with all my heart: I’m so proud to be your son.”

Kirk Douglas was born in 1916, the same year that Coca-Cola launched its formula — the same one used today. It was also the year that Woodrow Wilson was elected to his second term as president.

Meanwhile, Jeannette Rankin was elected to Congress in the state of Montana, making her the first female representative. However, women wouldn’t gain the right to vote nationwide until four years later.

102 years young✨ to my inspiration, my pappy. i can’t put into words how much you mean to me. happy birthday, i love you.