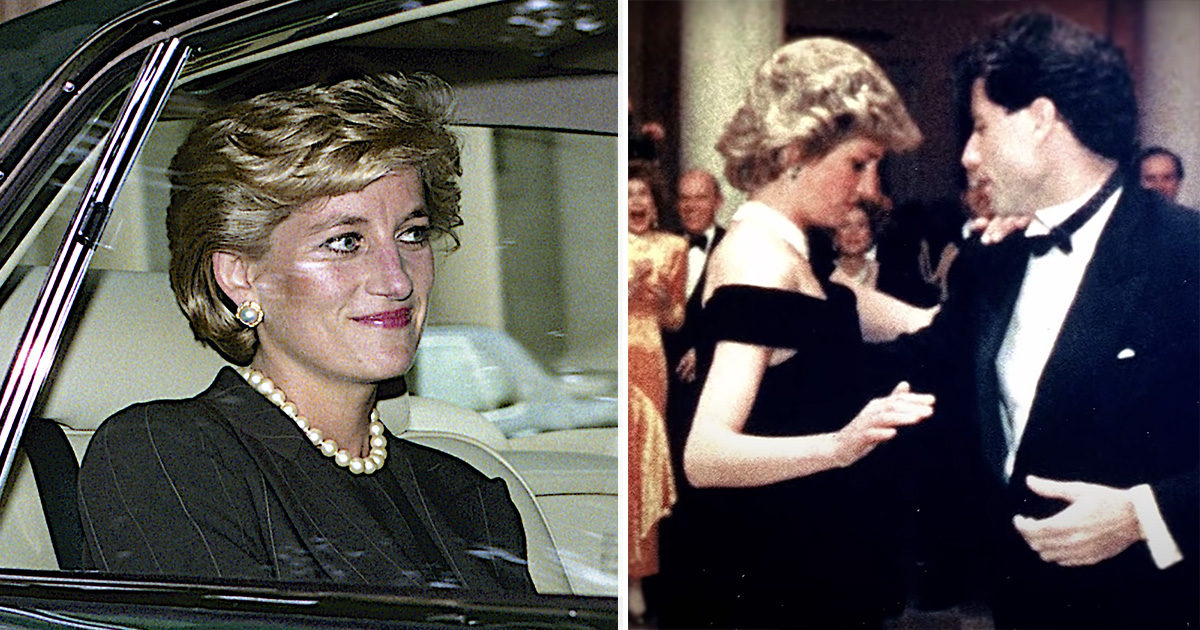 One of the skills I envy most about other people is their ability to dance. Of course, everybody has their own style, but I really would love to learn to do it like the pros do!

If there’s one person who’s been good at inspiring other people to dance, it’s John Travolta. Following the legendary dance scene in Pulp Fiction, I’m sure many viewers tried to copy his moves.

But there’s one thing that few would be able to replicate. The legendary actor actually got to dance with Princess Diana herself at a White House dinner. And now, he’s spoken out about the event – saying it was “like a fairy tale”.

John Travolta has been through a lot in his life. His career has had its ups and downs, just like any other actor or actress, but in Travolta’s case, the bottom truly meant rock bottom.

The most beautiful about life can be getting a way of fixing things no matter how bad they get. And in the early 1990s, fixing it for Travolta meant landing a role in Quentin Tarantino’s film Pulp Fiction.

Not only did it, once again, turn Travolta’s career around, but it immortalized him and his character in film history. The most memorable thing about his performance in the film? Well, that might just be the legendary dancing scene with Uma Thurman.

At the time, Quentin Tarantino had directed several films, including Reservoir Dogs. But whilst his other works were appreciated by audiences, it was Pulp Fiction that allowed him to take the next step toward becoming a first-class director with his own style.

There are many things that come to mind when talking about Tarantino’s films. One of the biggest things that sets them apart from other flicks – for me at least – is the often long and detailed dialogue.

But for Pulp Fiction, it was the aforementioned dancing scene that became the biggest take away, and it was John Travolta himself who helped Tarantino make it a reality.

“‘Quentin recommended the Twist,” Travolta told Vanity Fair. “And I said, ‘Well, Little Johnny Travolta won the Twist contest when I was eight years old, so I know every version. But you may add other novelty dances that were very special in the day’.”

“He said, ‘What do you mean?’ I said, “There was the Batman, the Hitchhiker, the Swim, as well as the Twist.’ And I showed them to him, and he loved them. I said, ‘I’ll teach Uma the steps, and when you want to see a different step, call it out.'”.

When shooting the dance scene, Tarantino then yelled out different names of steps, such as “Batman” and “Hitchhiker”.

The dance moves helped to elevate John Travolta to the next level. In 1995, he was nominated for an Academy Award for Best Actor in a Leading Role, and also nominated for a Golden Globe for Best Performance by an Actor in a Motion Picture – Drama.

“I thought [Tarantino] was making a small movie. I never imagined the phenomenon it would become,” he told Esquire.

“You hope to do a good job and to be able to communicate with the audience, longing for them to get the pleasure you had when you made the film.”

But even though it was a hugely impressive dance in Pulp Fiction, John Travolta probably had his biggest dance 10 years earlier.

It was at a White House state dinner in 1985 – where he danced with Princess Diana herself. It was iconic, both for her and John.

The dinner at the White House was hosted by then-President Ronald Reagan and first lady Nancy Reagan.

It all began with Nancy Regan approaching Travolta, taking him aside and saying that someone had a very special request. It was Princess Diana, who really wanted to dance with him.

However, Travolta was very nervous to ask Diana to dance. He waited until midnight, when he nervously went over to her and said: “Excuse me, princess, would you care to dance?”

Princess Diana and John Travolta soon stood on the dance floor together, and it led to one of the most iconic White House moments of all time. The Princess was wearing a wonderful black Victor Edelstein gown, and Travolta was dressed in a black tuxedo.

Travolta led Princess Diana through the dance. And the moment that he took her in his arms was something special indeed for the legendary actor. In fact, he described his feelings as those like “a frog who had been turned into a prince.”

Dance at the White House

Not only was the dance with Diana special for John Travolta, but it also heralded a sort of fresh start for the actor. Pictures of he and Diana dancing spreading all over the world.

Following star roles in Grease and Saturday Night Fever, Travolta’s career had began to fade, and he starred in several flop films. However, after the Diana dance, he got roles in films such as Pulp Fiction, Swordfish and Broken Arrow.

Speaking to the Mirror in 2007, John Travolta actually credited the dance with Diana as “saving” his career.

“That was an amazing moment because I was having a dip in my career and no one was interested in me,” he said. “Suddenly, I was the only thing that mattered in America to Princess Diana. I was like ‘Wow! I matter to someone again’.”

He added: “I was on the cover of every newspaper and magazine in the world and someone as significant as Princess Diana reminded everyone of me.

“It was a wonderfully special moment of her fulfilling a dream and giving me a new value.”

Even though John Travolta has shown himself to be a great dancer, gliding around the floor with a princess was something else. Speaking with Esquire, he said that the dance itself might have been the easy part, with it being a “great privilege and honor”. Working up the courage to ask her, meanwhile, was really tough, even for a movie star.

“I thought, ‘There must be a reason to do this and I better give it my all,” Travolta said. “This meant guiding the dance well and seeking to have fun. That was the easy part, but introducing myself to Diana in the proper way, conveying assurance, and asking her to be my dance partner was a complicated mission.”

Nonetheless, Travolta and Diana embraced in a legendary moment. Sadly, just 12 years later, the world was mourning the beloved princess after she passed away in a car accident in Paris.

But for John Travolta, his memories from that dance at the White House will always live on.

“We are in the White House. It’s midnight. The whole stage is like a dream. I go up to her, touch her on the shoulder, ask her to dance,” Travolta recalled. “She turns around and when she sees me she displays that captivating smile, somewhat sad, and accepts my invitation. And there we were, dancing together like in a fairytale.”

The current COVID-19 pandemic has been rough on millions of people around the world, forcing them to stay inside and not allowing them to meet family and friends.

For John Travolta and his family, it’s been more than that.

In July of 2020, his wife Kelly Preston passed away after being diagnosed with breast cancer. She was only 57-years of age.

“On the morning of July 12, 2020, Kelly Preston, adored wife and mother, passed away following a two-year battle with breast cancer,” a family representative told People at the time.

“Choosing to keep her fight private, she had been undergoing medical treatment for some time, supported by her closest family and friends,” the family representative added.

“She was a bright, beautiful and loving soul who cared deeply about others and who brought life to everything she touched. Her family asks for your understanding of their need for privacy at this time.”

John Travolta wrote on Instagram: “My family and I will forever be grateful to her doctors and nurses at MD Anderson Cancer Center, all the medical centers that have helped, as well as her many friends and loved ones who have been by her side. Kelly’s love and life will always be remembered.”

In a heartfelt message on social media later in 2020, Travolta thanked all the people that had reached out to him and his family following his wife’s passing.

“I just wanted to take this moment to thank each and every one of you for supporting me in such an incredible way this year,” Travolta said.

Preston is survived by her husband John Travolta and their two children, daughter Ella and son Benjamin.

Kelly Preston was born Kelly Kamalelehua Smith on October 13, 1962 in Honolulu, Hawaii. She studied acting at the University of Southern California. In 1985, she started her acting career, appearing in several major movies such as Mischief, Twins, Jerry Maguire and For Love of the Game.

Preston had some minor television roles during the course of her career as well. In 2018, she starred in the film Gotti, which would be her final film role.

Travolta and Preston got married in 1992, following his proposal at the Palace Hotel restaurant in Gstaad, Switzerland the year before.

Last year, on their 28th wedding anniversary, Preston wrote: “To my dearest Johnny, the most wonderful man I know. You have given me hope when I have felt lost, loved me patiently and unconditionally… made me laugh harder than any other human being possible… shared the most beautiful highs and at times low. You’re a dream Daddio and make life so much fun!! I trust my love with you implicitly. With you I know I will always be okay no matter what happens. I love you forever and completely. Happy 28th Anniversary @johntravolta.”

The couple welcomed son Jett in 1992. However, he tragically passed away in January 2009 after suffering a seizure, at age 16.

This year has been very tough for the Travolta family. On February 18h, John Travolta celebrated his first birthday since the passing of his wife.

Daughter Ella took to Instagram, sharing a picture of her together with her brother Benjamin, as well as their father, John.

In the caption, Ella paid a heartwarming and sweet tribute to her father, calling him “the most incredible man I have ever known.”

“You are not only the best Dad ever, but you are also my best friend. Thank you for raising us, helping us and loving us and thank you for all of the good you do every day. The world is so lucky to have you and so are we. I love you Daddy. I had the best time celebrating your birthday with you yesterday,” Ella wrote.

We hope that John Travolta and his kids are doing well following this very tough year. And hopefully, they can find happiness in each other, and through dancing. Because that sure is something Travolta can do!