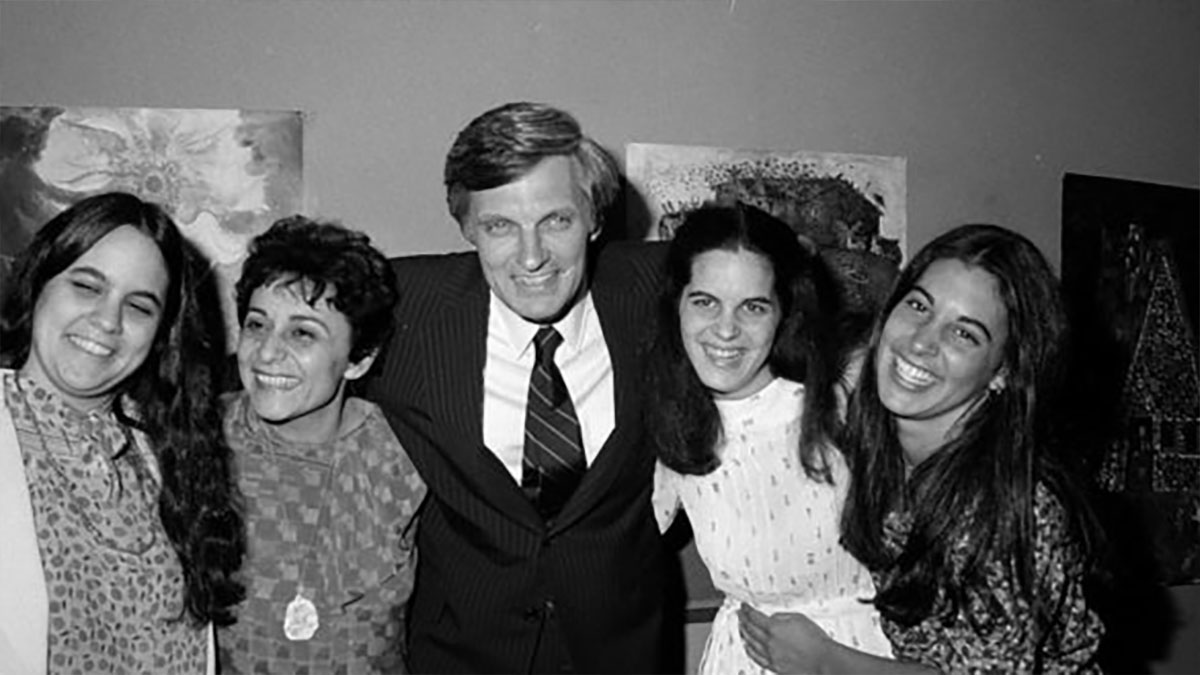 Considered a Hollywood treasure thanks to his role as Hawkeye Pierce on the much-loved TV show “M*A*S*H,” Alan Alda is also admired for overcoming many childhood struggles on his road to success.

The wartime comedy and drama M*A*S*H, which ran from 1972 to 1983, is one of the highest-rated shows in U.S. television history and its final episode remains one of the most-watched finales of any television series.

Alan Alda ended up winning a Golden Globe for Best Actor in a Television Series six times for his part in the beloved show.

Despite coming from a showbiz family the highly-rated actor’s childhood was one of many upheavals, struggles, and trauma, which began at a young age.

Born in the Bronx in 1936 Alan spent his childhood with his parents traveling around the United States in support of his father’s job as a performer in burlesque theatres. His father Robert Alda (born Alfonso Giuseppe Giovanni Roberto D’Abruzzo) was an actor and singer, and his mother Joan Browne was a homemaker and former beauty-pageant winner.

In his memoir, “Never Have Your Dog Stuffed — and Other Things I’ve Learned,” Alan revealed that his father often spent many nights away from home working and his mom struggled with her mental health.

During the 40s and 50s mental illness was a taboo subject with very few resources to help so many families were left to deal with it alone.

“How much easier it could have been for my father and me to face her illness together; to compare notes, to figure out strategies. Instead, each of us was on [our] own,” he wrote in his 2005 memoir.

He recalled a traumatic childhood memory of when he was just six years old and had stayed up with his mother while his father was working late.

When Robert got home, his wife accused him of sleeping with another woman. The argument led to Alan’s mother attempting to stab his father with a paring knife. Before anyone was harmed, Alan grabbed the knife from his parents and rammed it into the table, bending the point.

He admits that weeks later when he mentioned it to his parents they denied all knowledge of the incident and his mother said he had imagined it.

The following year Alan was diagnosed with Polio, a disabling and life-threatening disease.

“I got it when I was 7,” he said to AARP magazine. “I had a stuffy nose at Warner’s movie theater—honking the whole evening. I couldn’t clear my nose. When I got home, I threw up, and my legs were unsteady. The next day, I had a stiff neck. I couldn’t sit up in bed.”

Alan spent two weeks in hospital and then six months of painful therapy which involved wrapping his arms and legs with hot towels to help increase the blood flow and combat the muscle weakness that could be caused by the disease.

“I had nearly scalding blankets wrapped around my limbs every hour,” Alan recalled. “It was hard on me. It was harder, I think, on my parents, who couldn’t afford a nurse and had to torture me themselves. It’s always better to pay somebody to torture your kid.”

Thankfully the treatment worked and Alan made an astonishing recovery with no sign that he had ever had the disease.

As well as the many traumas and obstacles he overcame Alan had an unconventional childhood where he watched burlesque shows from a young age and made his first stage debut as a baby.

He writes in his memoir of the constant traveling he did with his parents so his father could sing with the burlesque troop and sat and watched the raunchy shows as a toddler sometimes five times a day.

Alan also shared in his memoir that when he was two years old, his father had posed him with a tobacco pipe for a newspaper to get publicity for the burlesque club where he worked.

“A photographer from the Toronto Daily Star came backstage, and my father got the idea that if he posed me in a way that made me look as if I were smoking a pipe, the paper would be sure to print the picture and the burlesque company would get some unusual publicity. They dressed me up in my woolen suit and posed me gravely holding a pipe with tobacco in it,” he wrote.

Despite his chaotic upbringing and overcoming a life-threatening disease Alan went on to do very well at school, studied English at Fordham University in the Bronx, New York City, and then joined an improv comedy group where he honed his performance skills and comedic timing.

His career officially started in 1959 when he made his Broadway debut in “Only in America.”

A few years later, he made his film debut in “Gone Are the Days” in 1963, a film version of the theater play, “Purlie Victorious,” which he had starred in too. He went on to appear in multiple Broadway shows and movies before landing his most notable role as Hawkeye Pierce in “M*A*S*H.”

Since then he has had recurring roles on TV shows such as “The West Wing” and “30 Rock”. He received critical acclaim for his appearances in films such as Same Time, Next Year, and for his directorial debut film The Four Seasons. In 2004, Alan was nominated for the Academy Award for Best Supporting Actor for his role in The Aviator.

Behind the scenes, his personal life was also a triumph; he married musician, photographer, and writer Arlene Wiess in 1957. And 65 years later, they are still happily married.

Alan met the woman of his dreams, and when he first met her, the actor knew that she was the woman he would spend the rest of his life with.

The couple first laid eye on each other at a party in Manhattan – long before Alan would become widely known as the iconic Hawkeye.

“My wife says the secret of a long marriage is a short memory,” Alan told Closer Weekly at the New York Film Festival premiere of Marriage Story, adding that it “seems to work!”

“I don’t think we spoil each other, we just love each other,” he added. “Without her, I wouldn’t do an awful lot because every time I’m leaving the house to do some work, she says, ‘You’re going to be great.’ And I say the same thing to her. She’s a writer and a photographer, busy all the time, and I’m very proud of her.”

But Arlene did sacrifice her musical career to have more time for her marriage, and she’s been very supportive and always by Alan’s side – especially since he was diagnosed with Parkinson’s disease in 2015.

The couple has three daughters; Elizabeth and Beatrice, both started as actresses, but over time, their careers have followed different paths with Elizabeth becoming a special education teacher and Beatrice becoming a director.

“Elizabeth decided she didn’t really care for acting. She became a teacher of the deaf and a special education teacher in general,” Alan told Closer Weekly.

Alan’s eldest daughter Eve decided to stay out of the spotlight. According to her Facebook page, Eve studied psychology at Connecticut College and currently lives in Winchester, Massachusetts. Her profile also indicates that she studied at the Simmons School of Social Work in Boston as well.

Alan, who suffers from Parkinson’s disease, reveals he had the most fun making the 1981 movie The Four Seasons “because I wrote it and directed it, two of my daughters were in it [and] my wife photographed it.”

Since he was diagnosed he said he’d notice a few twitches here and there but had taken up boxing.

“I’m taking boxing lessons three times a week. I do singles tennis a couple of times a week. I march to Sousa music because marching to music is good for Parkinson’s,” he said.

Juggling fatherhood, healthy marriage, and a Hollywood career can’t be easy but this inspirational star has managed it.

Please share this story with all the ‘MASH’ fans you know.