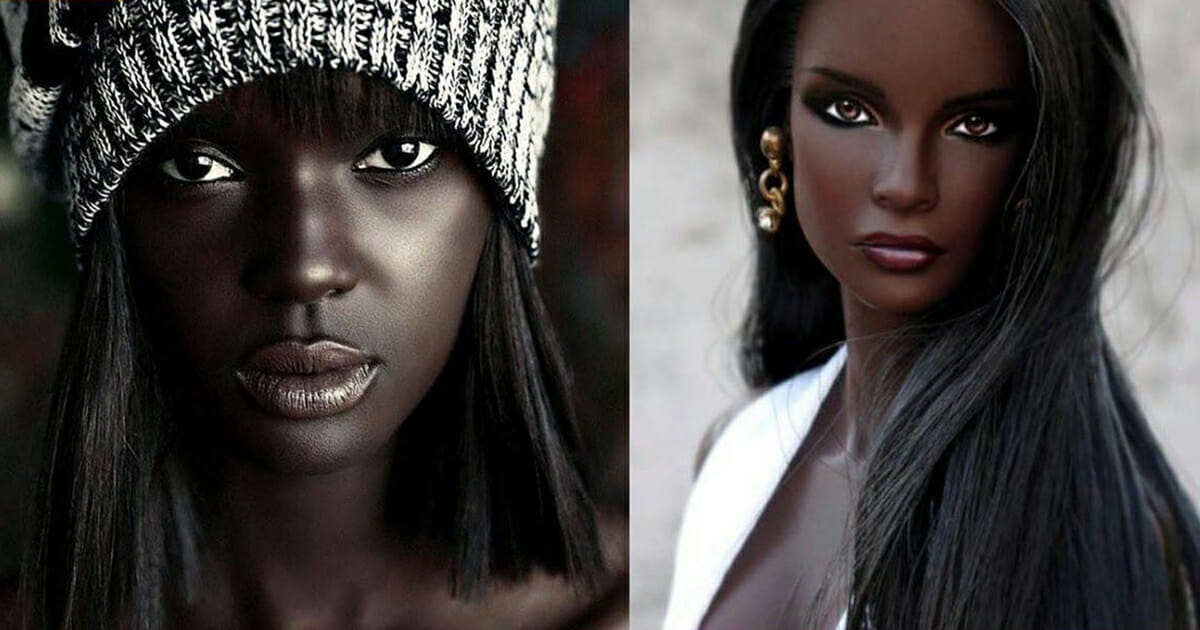 There are many amazing models out there that proves that beauty comes in all colors.

One of those? Meet Nyadak Duckie Thot, who looks like a Barbie doll with her symmetrical properties and flawless skin.

Her ethnicity is Australian and Sudanese and her striking beauty has brought her a lot of publicity.

22-year-old Nyadak Duckie is one of six siblings who grew up in Melbourne, Australia.

Her parents settled in Australia having left war-torn South Sudan a year before she was born. Her father works as a vet and her mother works in childcare.

Duckie was introduced to modelling when she was 15 by her sister Nikki who also models.

In 2013 she appeared on Australia’s Next Top Model – a spin-off of the American show hosted by supermodel Tyra Banks.

Duckie was just 17 when she took part and finished third.

After the tv-show, she took a risk and moved to Brooklyn, New York to try kickstart start her career.

With only $400 dollars in her pocket a year ago, her first job in New York City was with world-renowned makeup artistPat McGrath, something she’d always dreamed of and stated would happen for her.

Time to bring back the bangs? ??‍♀️

Since then, she has been published on the cover of several magazines and she is now making her name in the fashion industry.

In 2017, her career changed completely, when she participated in a photoshoot called “Duckie After Dark,” where she was almost identical to a Barbie Doll.

After appearing in a photograph titled “Duckie After Dark”, people weren’t sure if they were looking at a person or at a doll.

This spectacular type of shoot is known as “Barbie Style,” and it renders the effect that stunned people all over the world.

Depending on the light, the model, who goes by the nickname Duckie, has different skin tones.

“They haven’t made the same efforts to ensure black women are looked after in their most natural form. If you really think about it, it’s the black women on YouTube who have really held it down with their natural hair tutorials.

I think [the industry] should really take ownership and start to invest in us.”

Most recently, she drew a huge applause on social media after expressing the difficult journey of dealing with natural hair in the world of fashion.

In an Instagram post, Duckie expressed she’s never had a good experience in dealing with her natural hair for the runway, beginning from her days as a ANTM contestant.

beyond blessed to be the new global spokeswoman for @lorealmakeup ❤️ #lorealparis

“I was extremely upset and embarrassed that they ‘didn’t know how’ to cornrow my natural hair when at the end of the day that’s their job. I sat in front of the mirror silently crying before my shoot doing my own hair, cameras rolling while all the other girls had hairstylists, s#it scared I was going to get eliminated because a few ‘hairstylists’ didn’t know how to do their job.”

Like mother, like daughter. ?? Homage to @patmcgrathreal, recreating the iconic image and style of a pioneer and innovator. Pride. Joy. Inspiration. 2018. #inspire18

But she clearly had goals further down the line in addition to her solid modeling career.

Ultimately, she wants to help bring her homeland South Sudan to the level of belonging and prosperity it deserves.

I think she is gorgeous. Her skin & eyes are just beautiful!

I loved the fact that Duckie is making the best of her beauty, she has lovely skin and beautiful eyes I think most people would turn and take another look if she passed you. ????????