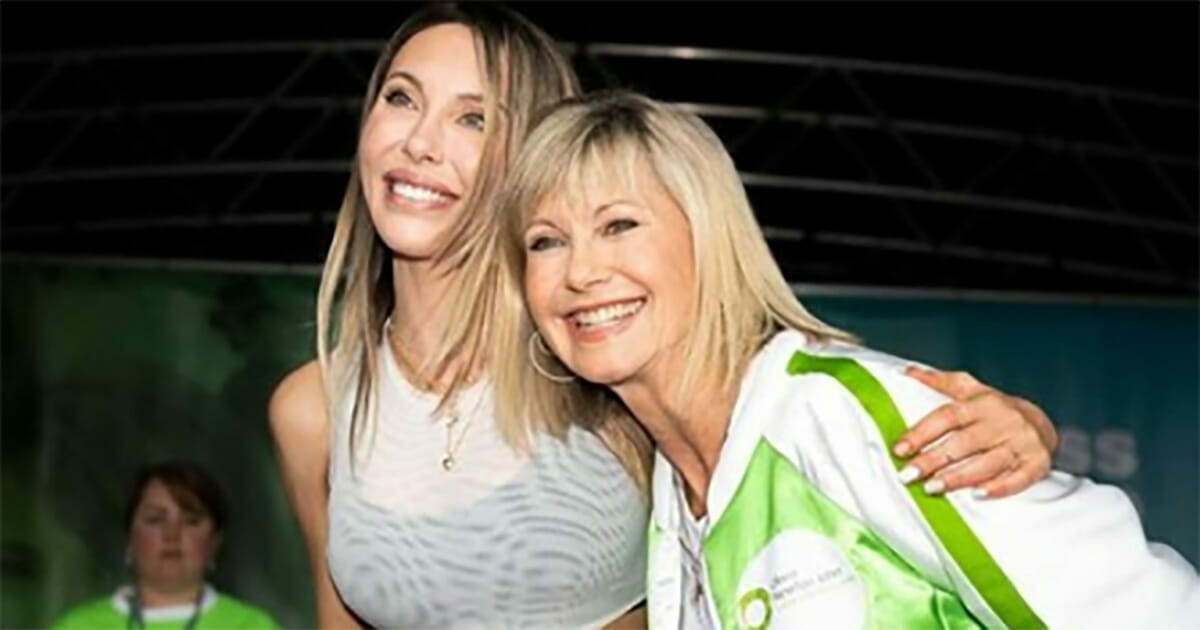 Much-loved Australian icon Olivia Newton-John, who is battling cancer for the third time, leads the way in a walk which has raised hundreds of thousands of dollars for people battling the disease.

Surrounded by her supportive and adoring family the 71-year-old Grease star took part in the annual Wellness Walk and Research Run and shared hugs and kisses with her loving daughter and adoring husband.

The British-born star, who moved to Australia when she was 4 years old, is probably best known for playing the legendary role of Sandy in ’70s hit movie Grease.

Her duet with Danny Zuko aka John Travolta, ‘You’re the one that I want’ in the grand finale became one of the best-selling singles of all time.

Newton-John went on to star in other movies including another one alongside Travolta in Two of a Kind and her singing career led her to win four Grammy awards.

In 1992 she was diagnosed with breast cancer, fought it successfully but it returned in 2013 when she was told it had spread to her shoulder.

Then, in 2017 she was told her breast cancer had returned again and metastasized to her lower back.

The brave star completed the walk, in Melbourne, Australia, with her 33-year-old daughter Chloe Lattanzi and husband John Easterling. So far more than 900,000 Australian dollars ($605,000) has been raised from the walk.

@therealonj and her family have cut the ribbon before the second wave starts! ? #wwrr19 #makeyourstepscount

A post shared by Support people with cancer (@wellnesswalkandresearchrun) on Oct 5, 2019 at 4:17pm PDT

Newton-John, who uses cannabis oil to cope with the pain and is an advocate for its legalization for medical reasons, talked about her journey in fighting the disease.

“I’m happy. I’m lucky. I’m grateful. I have much to live for. And I intend to keep on livin’ it,” she told CBS This Morning.

She also told journalists she was ‘thrilled’ after hearing that the Australia’s government is going to put $3 million dollars into research, in order to explore how medicinal cannabis can help cancer stricken patients.

“This year, through treatment and medicinal cannabis, I am feeling fantastic.”

“I hope to be able to soon offer [medical cannabis] to everyone – that’s my dream,” she continued.

“I was flat on my back in the center [the Olivia Newton-John Cancer Wellness & Research Centre] and this year, through treatment and medicinal cannabis, I am feeling fantastic. I hope to be able to soon offer that to everyone – that’s my dream,” she added.

She said taking the drug had made a huge difference in her cancer battle.

“It was instant. I felt a big change in my mobility and pain relief. It got me off morphine, which is a huge deal,” Olivia previously said.

THANK YOU to everyone who participated yesterday and to everyone who helped raise over $900,000 so far to support people with cancer! Well done also to all of our Global Supporters who walked around the globe to help win over cancer. ? Fundraising will remain open until Sunday 20 October, let's raise one million dollars to support people with cancer. Head to our Facebook to check out our first release of photos from event day, share and tag! You still have time to donate to help us raise one million dollars > click the link in our bio!

A post shared by Support people with cancer (@wellnesswalkandresearchrun) on Oct 7, 2019 at 12:00am PDT

We hope this wonderful lady continues to find the strength to fight this awful disease, sending her all the positive vibes.

Please share to pay tribute to this legend of a lady and all those battling cancer.