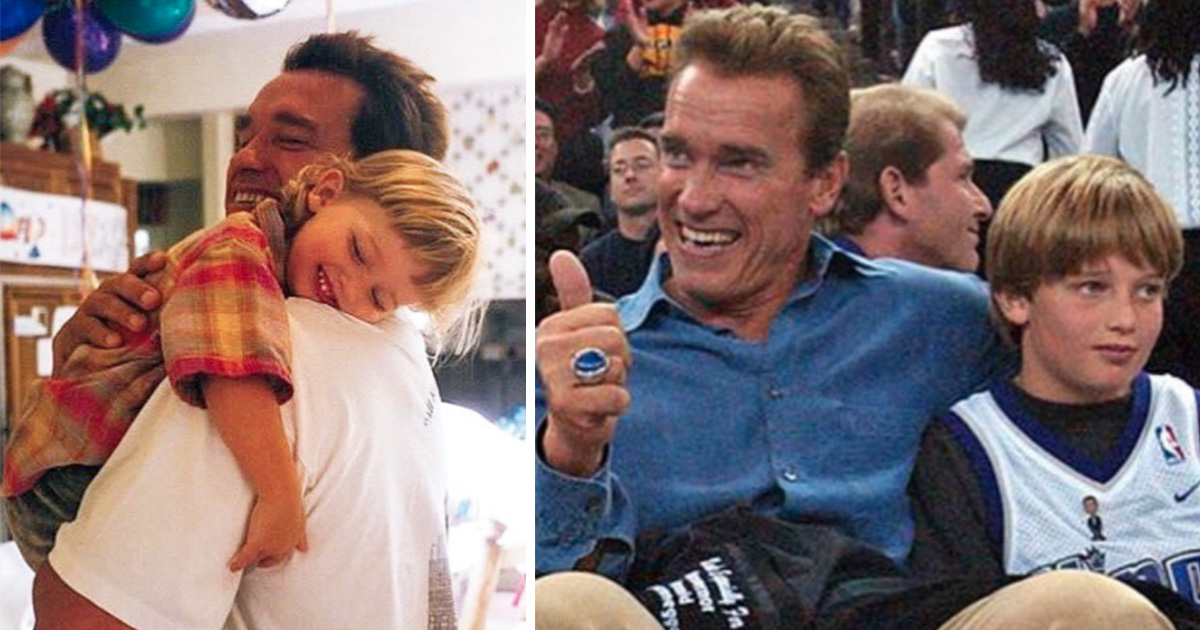 Arnold Schwarzenegger became the Terminator to the entire world. The former legendary bodybuilding champion, politician, and Hollywood action hero has done it all, but now, his son Patrick Schwarzenegger is in the Hollywood spotlight.

28-year-old Patrick is pursuing the same profession as his father, and it’s going really well. Now, he’s spoken out about his father, and what it really was like seeing him as Terminator and “Mr. Freeze” while growing up.

Arnold Schwarzenegger is best known for starring in several sci-fi and action movies, especially the Terminator franchise, which made him a big-time celebrity. However, even before he rose to fame as an actor, he was well known as a bodybuilder, having won Mr. Olympia several times.

He first starred as Hercules in the fantasy comedy Hercules in New York, before getting international recognition after appearing as Conan in Conan the Barbarian.

These days, Arnie can look back on a very long and successful career. Not only that, but he also has a wonderful family around him, with his oldest son Patrick heading in the same direction. No, not bodybuilding, but acting.

But how did it all start for Arnold Schwarzenegger?

Arnold Schwarzenegger was born on July 30, 1947, near the city of Graz, Austria. His childhood was far from ideal, with his father being an alcoholic policeman. But after his teen years, Schwarzenegger knew what he wanted to do.

Young Arnold loved working out, and for him, it was all about bodybuilding. He entered the Austrian army at 18, but soon after, went AWOL in order to go to Germany and win Junior Mr. Europe.

When he came back, things didn’t look great for him; Arnold had to spend a night locked up.

“It wasn’t really jail. I was there for one night so they could say, ‘We punished him.’ But they were proud. Then I went back to tank-driving school,” he said.

By the age of 20, Arnold had turned into a star in the sport of competitive bodybuilding. He dominated the arena and became the youngest person to ever win the Mr. Universe title. At this time, the audience for bodybuilding was growing heavily, and so Schwarzenegger became a celebrity, transforming himself into an icon.

In 1968, he decided to emigrate to the US, and went on to win a staggering five Mr. Universe titles, as well as seven Mr Olympia titles. Sure, he was great and loved the sport. But it wasn’t his only passion.

At that point, Schwarzenegger decided to dedicate himself to acting.

Because of his size, Schwarzenegger knew it was going to be a struggle to get parts. So instead, he tried to use his build to his advantage.

“I never auditioned. Never,” he said. “I would never go out for the regular parts because I was not a regular looking guy, so my idea always was everyone is going to look the same and everyone is trying to be the blond guy in California, going to Hollywood interviews and looking somewhat athletic and cute and all this.

“Okay, how can I carve myself out a niche that only I have? And so I always felt really strong about I have to get into the movie business.”

Arnold Schwarzenegger starred as Conan in Conan the Barbarin, but it was the role role of the Terminator in the blockbuster series that made him known across the entire globe.

Interestingly, it wasn’t set in stone that he was going to get the role as the Terminator. At first, Arnold was hoping to get the part of Kyle Reese in the movies, who served as the main protagonist in the first film.

But when he got the script of Terminator, he became “fixated” on the lead role.

“He’s a machine. So everything has to be matter-of-fact. I told Jim that,” Schwarzenegger told Men’s Health.

“I said there should be no joy, no gratification, no kind of victory lap of any sort. Just the mission, complete. I go through these points. Jim, afterward, says to me, ‘Fuck, you analyze it better than the way I have written it. Why don’t you play the Terminator?”

When all was said and done, Schwarzenegger got the part. The rest is history.

Even though the Terminator was a pretty mean guy, for some reason audiences admired the character. According to Arnold, it was because he was able to do the things all people wanted to do.

“Everyone wants to wipe out a police station when they get mad at the police. We had a test screening. We showed it to 50 cops. They all applauded when I wiped out the police station—because it was not a human being doing it, it was the machine doing it,” he explained.

Arnold starred as the Terminator in five movies, as well as voicing the machine in several video games. It became the role of a lifetime, and even now at 73, he’s known as the iconic action hero.

The latest Terminator film was released in 2019. Arnold Schwarzenegger reprised his role.

This time, the Terminator was travelling back in time, but what would Arnold do if he could do the same?

“There’s a saying in German: Selbsterkenntnis ist der beste Weg zur Besserung, which means Self-knowledge is the best way to improve. I believe in that,” Schwarzenegger said.

“When you fail, the trick is to get up again and evaluate in an honest way what went wrong. Yes, it’s easy to say, ‘Don’t do Hercules in New York‘. But that was an interesting experience.Each one of the things I made a mistake in, I eventually learned from that, and it made me a better person. It made me more experienced. It made me wiser.”

We can spend hours talking about Arnold Schwarzenegger’s incredible career, from body building-champion to being the Governor of California. However, now we’re going to take a look at his son, who has actually taken the same career path as his father.

Patrick Schwarzenegger is 28-years of age, and is now following in his father’s footsteps in becoming a movie star himself.

Grew up on set

Patrick Schwarzenegger was born September 18, 1993 at the St. Johns Hospital in Los Angeles, California. His childhood was spent in LA, where he attended high school. As one could guess, his early days sure was special.

When he was young, his father Arnold was in his prime as an actor. And as a kid, he often times joined his father on set, where Patrick found his true passion as well.

“I fell in love with acting, with film, with sets, with everything growing up,” he said.

“If I had a good week in school, my dad would pick me up early, take me to set. For a kid it’s a dream come true. You’re on the Universal studios lot, I watch my dad walk in as “pops” and come out as Mr. Freeze.  During breaks he had a golf cart, and he’d take me to the Jaws ride, the E.T, ride. All these different things, there were candy everywhere.

Even though he knew his father was an actor, during his early days it was kind of different. In 1997, when Patrick was only 5 years of age, Arnold Schwarzenegger starred as “Mr. Freeze” in Batman & Robin.

And for a young kid seeing Mr. Freeze, it was pretty scary.

“I was super young. But I have these brief memories of my dad going in and becoming Mr. Freeze. And him going in as dad and coming out as this big, blue, bald guy,” Patrick told Variety.

“I have photos of me with him and my mom, and I’m, like, creepily staring at him, like I’m scared and I don’t know who he is. “I think I was scared of him.”

As the years went by, Patrick spent more and more time on set with his father. He would even sleep on the lot, which was his favorite thing.

At the same time as Patrick spent time in school, he also wanted to start auditioning, which was his father’s advice. However, his parents didn’t want him to end up with an actor without an education.

They wanted him to go to college and get a degree, which Patrick also did. He graduated from the University of California with a business degree, as well as a cinematic arts degree.

Patrick Schwarzenegger started out with some minor roles as an actor, but in 2018, he got his first lead, starring as Charlie in the film Midnight Sun, in which he starred alongside Bella Thorne. A year later, Patrick got his second lead in the film Daniel Isn’t Real, which got several nominations and awards.

Aside from acting, Patrick Schwarzenegger is a real business man. He’s been into venture investing for several years.

He grew up playing all kinds of sports, but also, got his own business up and running when he was 15, called “Project360”. They sold bracelets and raised $30,000 dollars, which was donated to a women’s shelter in Long Beach, California.

Even though Patrick Schwarzenegger is a very busy man, running several businesses in addition to acting, he will always help if needed.

“If I’m at one of my gyms and someone needs to help sweep up the floor or something like that, I don’t get worried about getting my hands dirty,” he told Rain. “I’ve cleaned tons of floors at my businesses, I’ve made pizzas, I’ve done it all. You’re not an entrepreneur if you’re not willing to get your hands dirty—I learned that early”

Patrick Schwarzenegger has chosen a career path in the acting industry, and as such is following in his father’s footsteps. As of recently, he starred in the film Echo Boomers and more productions are on the way.

Growing up as the son – or daughter for that matter – of a major Hollywood star and choosing to pursue a career in acting must be very tough. Especially since you probably always will be compared to your famous parent.

However, in Patrick’s case, his parents Arnold and Maria Shriver have been very supportive of their son. Now, at 28-years of age, it’s his turn to be on the big screen.

“He’s so proud of me. Both my parents are proud of me,” Schwarzenegger said. “It’s pretty surreal ’cause I remember growing up and going to set with him and it was my favorite activity.”

“And I was so sad when he became governor, to go from Universal Studios’ lots to the Capitol,” he added. “But it was really surreal to have him come to set and have kind of the pages turned and, yeah, he’s really proud of me. You know, they’re so supportive and I couldn’t ask for a better parent duo.”

We really admire Patrick Schwarzenegger for going his own way, pursuing a career in acting even though we can imagine that he has big shoes to fill.

Hopefully, we’ll see more of him in the future – and who knows, maybe Patrick is the next Terminator as well?

Please, share this story with friends and family if you also think Patrick is a brave young man!