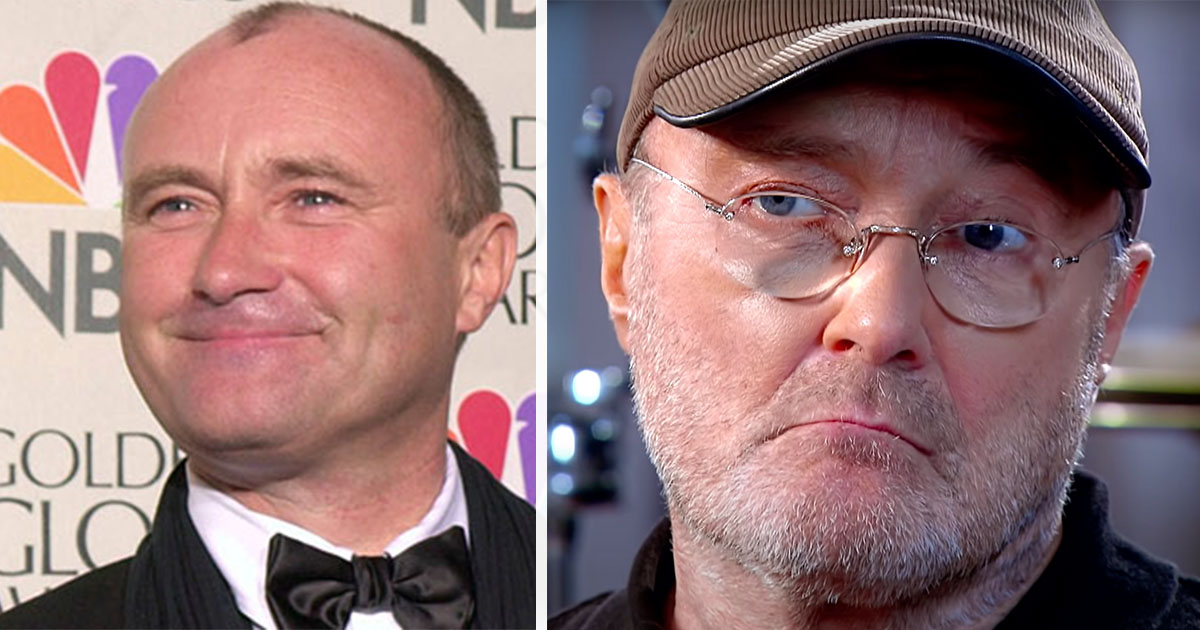 Phil Collins became a superstar as he rise to fame as the drummer and singer of Genesis. During the 1980s, he grew into one of the most successful musicians in the world, releasing songs such as In The Air Tonight, and You Can’t Hurry Love.

Now, Collins has turned 70, and it looks like time has taken its toll on the legendary singer.

Speaking with the BBC, Phil Collins gave an alarming health update, revealing that he barely can hold a drumstick.

Phil Collins has lived a full life in the service of music. As a young kid, he was introduced to several instruments, and once he became an adult music was all that mattered.

Collins has enjoyed success with several groups – including Genesis – and was equally fortunate as a solo artist. He’s released many hits, and received several awards for his work.

It’s simply impossible not to be impressed by the way he can sing and play the drums at the same time. Talk about a natural born talent!

Put frankly, Collins has enjoyed huge success throughout his life. Sadly, though, his health is starting to decline. But how did he get here in the first place?

This is all you need to know about Phil Collins.

Phil Collins turned to music, and especially the drums, as a young child.

He was born on January 30, 1951 in London, England. His father worked as an insurance agent and his mother as a talent manager and agent for child actors.

As Phil grew up, his home was always full of creative ideas. His older brother, Clive, went on to work as a cartoonist, and his sister competed professionally as an ice skater.

But for Phil himself, doing cartoons or ice skating wasn’t quite what he enjoyed. When he was 3 years old, he was given a drum and at five, his uncle made him a drum kit that could fit into a suitcase. It was made of tambourines, triangles, cymbals and toy drums, Collins recalled.

“The old cliché is, ‘Well, at least it will keep him quiet’,” he told Interview Magazine.

Collins quickly took interest in the drums, playing more and more, and even began performing in shows at his parents’ boating club. At the same time, he was actually a great actor, and it was easy to tell that he loved life on stage.

“When I started playing seriously, the English beat thing was just happening, the Shadows and bands like that. It was the very early ’60s,” Collins recalled.

“I remem­ber buying Please Please Me. I used to put the record player on very loud and set up my drums so I was facing the mirror, that way you don’t look at what you’re doing.

“Then when I was fourteen I went to a teacher to learn to read drum music. I figured when this rock-and-roll thing finished I would have to make a living playing in a dance band or in an orchestra pit. So I learned to read drum music, but I found that my capacity for reading was not anywhere near as good as actually playing by instinct.”

At 13 years of age, Phil was offered the chance to star in a London production of Oliver! At that point, he and his parents decided to leave the school he was enrolled at, and instead start studying at the Barbara Speake Stage School in London.

Collins was actually an extra in The Beatles’ 1964 film A Hard Days Night. He had talent that could’ve pushed him towards a career in acting, but it was music that was on his mind.

Alongside some fellow students at the Chiswick County School for Boys, Phil Collins founded his first band, Real Thing. Later, he joined the band Freehold, and it was at that point he wrote his first song, Lying Crying Dying.

In 1970 however, Phil Collins’ life would change forever. He saw an ad in the paper telling how a band called Genesis was looking for a drummer who could also serve as a backup vocalist. The band had been founded three years earlier, by lead singer Peter Gabriel, and they were desperately in need of a change in their music.

Collins got the job – and things changed instantly. In the five years that followed, Genesis released five studio albums and toured the US. In 1975, Peter Gabriel decided to leave the group, and all of a sudden, they needed a new lead singer.

The band was said to have interviewed over 400 singers. All the same, Phil Collins ended up becoming the lead singer, as well as drummer.

But was that really something he wanted?

“I felt exposed. I’d lived all my life behind the security blanket of a drum kit, and suddenly there was nothing except a microphone stand,” Phil Collins told LouderSound.

“And the band sounds different from out front. You hear a different kind of balance out front, and it isn’t comfortable. And I didn’t want the job, frankly.

“And this [Genesis] was kind of a family. ‘Do we want this person in our family? Will he fit in with the way we do things?’ Anyway, we didn’t find anybody and ended up with me.”

Even though Collins had mixed emotions about being the frontman, Genesis continued with their work. With him behind the steering wheel, the group continued their journey towards even more stardom.

Genesis had started out as a prog rock band, but now Collins and the rest of the group members moved onto more pop rock. In 1978, they got their first major hit with Follow You Follow Me, which reached No. 7 in the UK and No. 23 on the US chart.

Moving into the 1980s, more smash songs were released. Their 1980 album Duke became one of the band’s biggest commercial successes, reaching No. 1 in the UK.

But at the same time as Genesis was doing great, Phil Collins had started to move into other projects as well. He began his solo career, releasing his first album in 1981.

He both produced and wrote his own material, putting out songs as a solo artist such as the smash hit In The Air Tonight from his debut album, as well as You Can’t Hurry Love and I Don’t Care Anymore from his second solo album in 1982.

So why didn’t Genesis get those tunes?

“Well, Genesis got to the point where we’d all write together and then someone would go off and write the lyrics and kind of write the melody that would go over this thing that we’d written. And sometimes, there was a lack of air. It was all very claustrophobic,” Phil Collins explained.

“And I kind of always yearned for the space of an R&B record, you know? So one of the things that I said to myself when I started learning how to record at home was whatever doodles I was writing, I would sing. And then anything else I did would have to work around the vocal.

Worked with Frida from ABBA

“So, something like “In The Air Tonight” is a good example where you have an atmosphere and a vocal, and if I’d have given that to Genesis, it would have gotten a lot busier. Any of the songs I’ve done have ended up being busy from a production point of view.

“Certainly some are a little bit busier than others — I mean “Sussudio,” you know, it’s got all those horn parts.”

In 1985, Phil Collins released the dance tune Sussudio, which reached No. 1 on the Billboard singles list. Two years later, he did the title song for the film soundtrack to Against All Odds. It reached No.1 on the single charts, as well as receiving an Academy Award nomination and a Golden Globe nomination.

At that point, Phil was still a member of Genesis. The band released the classic tune I Can’t Dance in 1991.

Phil was also working as a producer, doing work with artists such as Anni-Frid Lyngstad from ABBA.

In 1996, he decided to leave Genesis to focus on other projects.

“Having been with Genesis for 25 years, I felt it time to change direction in my musical life,” Collins wrote.

“For me now it will be music for movies, some jazz projects and of course my solo career. I wish the guys in Genesis all the very best in their future. We remain the best of friends.”

Phil has been through a lot, both with new solo projects and producing.

He’s been married three times, and became known for writing about his relationships in songs. That includes his first hit In The Air Tonight. It was about the grief that he felt after divorcing his first wife Andrea Bertorelli, who left him for someone else.

“People ask me, “Aren’t you embarrassed? You’re putting your private life out for all the world to see.’ It’s like I oughtn’t to let people see that I was hurt, that I cry, that I do unmanly things,” Collins explained. “But I’m not embarrassed by it.”

These days, Phil Collins isn’t just a musician and producer with “a couple of hits”; he’s been awarded with six Grammy Awards.

Furthermore, Collins is actually one of only three (alongside Michael Jackson and Paul McCartney) to have sold more than 100 million albums (both as a solo act and a member of a band).

Collins reunited with Genesis in 2015, and last year, the group announced a new UK tour. However, due to the Covid-19 pandemic, it was postponed to this year.

Phil announced that his son, Nicholas, was going to do all the drumming for the tour. Besides Nicholas, he has four other children. His eldest daughter Lili Collins, 32, is now a successful actress.

“Nic is a great drummer, but he is capable of sounding like early Phil. For Mike and I, that was always quite exciting,” Genesis band member Tony Banks said.

“It means you can play some of the songs that you haven’t played with Phil as the drummer for a long time.”

Nicholas Collins will take care of the drums, though it later transpired that’s more to do with the fact that his father simply can’t anymore. Speaking on BBC Breakfast, the legendary musician explained that he won’t be doing the drumming because of health problems.

“I can barely old a stick”

“I’d love to but you know, I mean, I can barely hold a stick with this hand. So there are certain physical things that get in the way,” he said, adding that it might be the last time he will ever be on tour.

“We’re all men of our age, and I think to some extent, I think it probably is putting it to bed,” Phil Collins said. “I think yeah, I think just generally for me, I don’t know if I want to go out on the road anymore.”

Phil Collins is a true legend in music. Hopefully, he and his son will have a great time during the Genesis tour, and we wish him all the best in the future. Nothing is more important than your health.

Please, share this article to wish Phil Collins all the best, as well as honor him for his wonderful music!