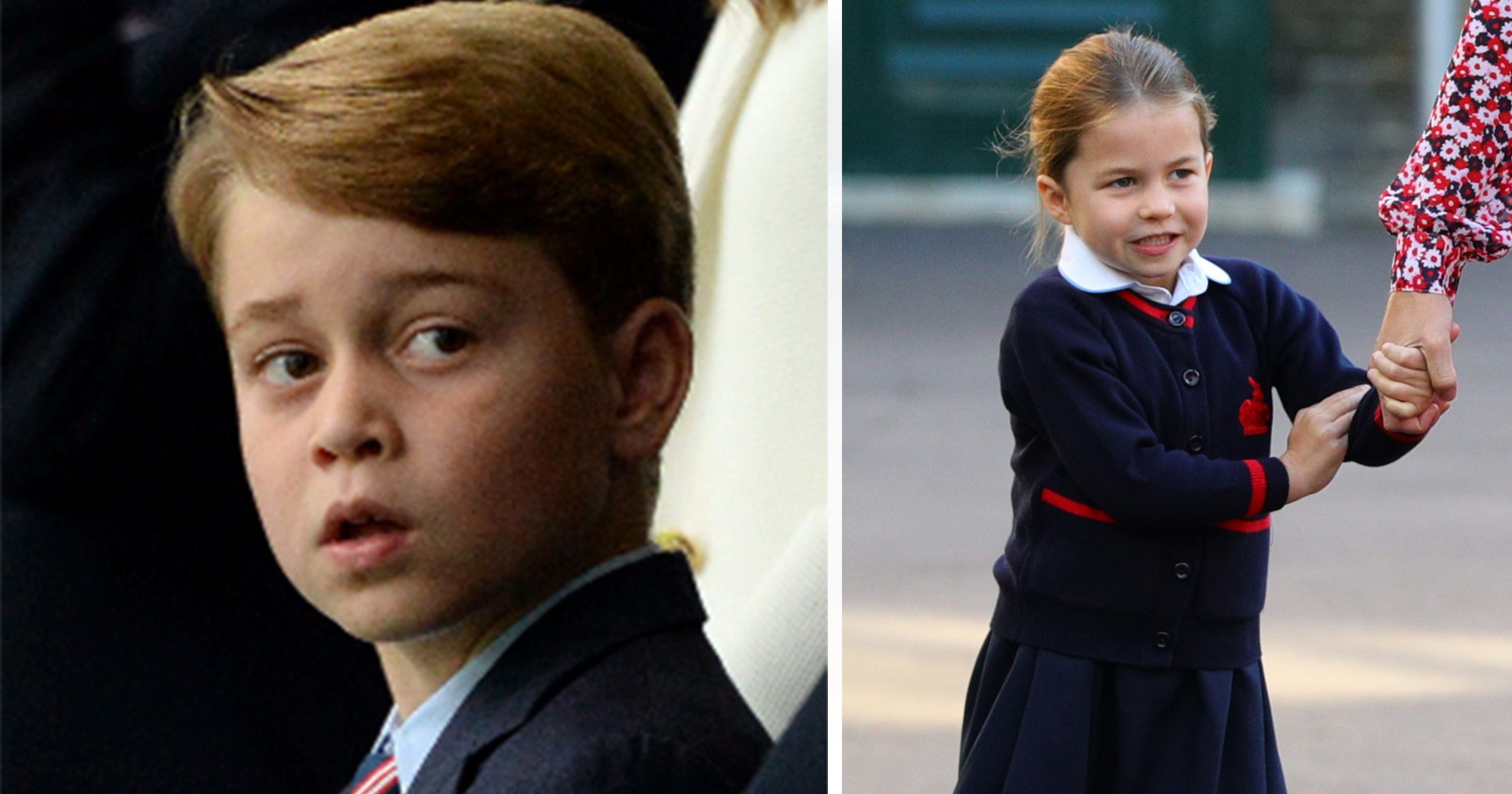 Prince George and Princess Charlotte are respectively in their fourth second year at the independent prep school in southwest London, England. It’s easy to say that the future King and his sister are very famous worldwide, especially in the UK.

Being a member of the Royal Family can be challenging, especially if you’re Prince George, as he’s third in the line of succession. But for now, he and his siblings can enjoy being children, not having to learn what royal duties are all about.

Both George and Charlotte are going to the same school. But when there, they aren’t going under their official “Prince” and “Princess” titles. The siblings have a different name when spending time with their classmates.

But before we get into Prince George and Princess Charlotte’s life, let’s take a look at how their parents even met in the first place.

Kate Middleton and Prince William go way back to when they were students. And over the years, she learned what royal life was about, turning into the paparazzi’s new subject to stalk.

William and Kate have always have seemed to be very happy in each other’s company. However, their relationship faced a major test in 2007.

Kate Middleton and William both studied at the University of St. Andrews in Scotland. The couple met through friends, although at first, Kate was timid.

William, however, didn’t recall the first meeting, saying he had to “wrack his brains” to remember it.

From the start, Kate and William were nothing but excellent friends. However, as the years at university went by, things became more serious.

The two started dating, and reportedly, it all began at a student fashion show. Kate caught William’s eye with a sheer outfit, which cost about $40, as reported by Insider.

According to the documentary “The Day Will and Kate Got Married,” which aired in April of 2021, that specific outfit changed everything.

Soon, they were deeply in love. And even though the outfit Kate wore was extraordinary for him, William explained that everything changed as soon as they started hanging out.

“We were friends for over a year first, and it just sort of blossomed from then on,” William told The Telegraph.” We just spent more time with each other and had a good giggle and realized we shared the same interests.”

William and Kate spent a lot of time together, getting to know each other at university. They both graduated in 2005. Kate Middleton earned a degree in art history and William in geography.

A year later, in 2006, Kate Middleton made her first public appearance with the Royal Family. Later that year, she attended the Sovereign’s Parade with her family at the Royal Military Academy, in which William appeared.

Being a member of the Royal Family sounds like a wonderful thing: with all the money, nice houses, and fancy dinners, life seems pretty easy. However – as we have seen in history, for example with Princess Diana – it can also be very tough, especially considering the British tabloid press, which can be harsh once they find a person to stalk.

And for Kate Middleton, this was also the case, as she became a subject of intense media fascination all over the country. After all, she was dating a future king. But at the same time, it’s not an excuse for the media to dig deep into her private life.

In 2007, it was reported that William and Kate had split. And some of the reports painted a picture of it as pretty inappropriate.

This love story would turn into a good one just a year later. In 2008, Kate Middleton and William reunited.

Years later, the couple spoke about their breakup, saying it was good.

“We were both very young … and we were both finding ourselves,” William said in an interview with the Telegraph in 2010. “It was very much trying to find our own way, and we were growing up.”

“I, at the time, wasn’t very happy about it, but actually, it made me a stronger person,” Kate Middleton added. “You find out things about yourself that maybe you hadn’t realized. I think you can get quite consumed by a relationship when you’re younger.”

It seemed like Kate and William both thought the breakup was a good idea when looking back on it. However, a newly-resurfaced report by the Mail in 2007 sheds new light on what happened.

Further, Kate was said to have been left “desperately upset,” as she already pictured they were getting married in the future.

Following their breakup, things got better between Kate and William. They became a loving couple and were very much appreciated by the public. And in 2010, the couple took the next step.

“We had a little private time away together with some friends, and I just decided that it was the right time, really. We had been talking about marriage for a while, so it wasn’t a massively big surprise. I took her up somewhere nice in Kenya, and I proposed,” William recalled.

He added, “I’d been planning it for a while, but as every guy out there will know, it takes a certain amount of motivation to get yourself going.”

Where did William and Kate get engaged?

“So I was planning it, and then it just felt really right out in Africa. It was beautiful at the time. I just … I had done a little bit of planning to show my romantic side.”

She didn’t see it coming at all since they were out with friends. Beforehand, Kate Middleton had thought of the idea that William maybe was going to propose. But it came as a “total shock.”

William had carried a ring around in a bag for three weeks and never let it go.

“Everywhere I went, I was keeping hold of it because I knew this thing. If it disappeared, I would be in a lot of trouble, and because I’d planned it, it went fine,” he said. “You hear a lot of horror stories about proposing and things going horribly wrong – it went really, really well, and I was pleased she said yes.”

The ring was truly really special, and of course, very proper for a future Queen Consort. The ring belonged to his mother, Princess Diana.

On April 29, 2011, William and Kate Middleton tied the knot at Westminster Abbey in London.

Prince George is third in the line of succession, after his father and grandfather, Prince Charles. When he was born – on July 22, 2013 – there was huge media interest in the little prince, and his birth was celebrated worldwide.

He became a big brother on May 2, 2015, after his sister, Princess Charlotte, was born. George started school at the Westacre Montessori School in Norfolk in early January of 2016. He transferred to Thomas’s Battersea School in September 2017, where he and his sister Charlotte now go to school.

According to its website, the fee for Prince George and Princess Charlotte for the upcoming school year at Thomas’s Battersea School is around $20,000.

William and Kate’s three children – George, Charlotte, and their youngest son Louis – all have official titles as Princes and Princess. When on official royal duties with their parents, they will always be referred to by their royal titles.

This is what George and Charlotte are called at school

However, at school, it’s an entirely different thing. According to Hello Magazine, George and Charlotte aren’t referred to with their royal titles.

Instead, they go by George Cambridge and Charlotte Cambridge. It’s a nod to their parents’ titles, with William and Kate Middleton being the Duke and Duchess. Further, it’s been reported that his classmates call Prince George “PG,” his initials.

This isn’t the first time the children have taken names. Both Harry and William used the same type of names in the military and school, being called William Wales and Harry Wales. Their father, Charles, is the Prince of Wales, and their mother, Diana, was the Princess of Wales.

Even though they are still very young, George and Charlotte have accompanied their parents on official visits to other countries. For example, in 2016, they traveled to Canada and to Poland and Germany a year later.

Prince George is now 8 years old, but even though he’s growing up fast, it sounds like he’s not ready for what’s coming in the future. According to royal commentator Neil Sean, George is “protected” from the future burden of being King.

“When you look at Prince George, it’s so weird, isn’t it? To look and think he has no idea what’s coming for him,” he said on his Youtube channel Neil Sean’s Daily News Headlines, as quoted by Express.

“Keeping a secure environment around him”

“He’s mighty protected at that age, but for him, he’s born into this. He doesn’t really know exactly how the Monarchy operates even at that young age.”

The fact that William and Kate have wanted to protect their children from what the royal duties can mean has long been known: in 2016, they spoke about it openly, saying that it’s essential to give George a normal childhood for as long as possible.

“I love my children in the same way any father does, and I hope George loves me the same any son does to his father,” William told BBC. “We are very normal in that sense. There’ll be a time and a place to bring George up and understand how he fits in, in the world.

“But right now, it’s just a case of keeping a secure, stable environment around him and showing as much love as I can as a father,” he added.

Let’s all wish Prince George and Princess Charlotte all the best in school!

Meanwhile, share this article on Facebook with friends and family if you enjoy reading about the Royal Family.