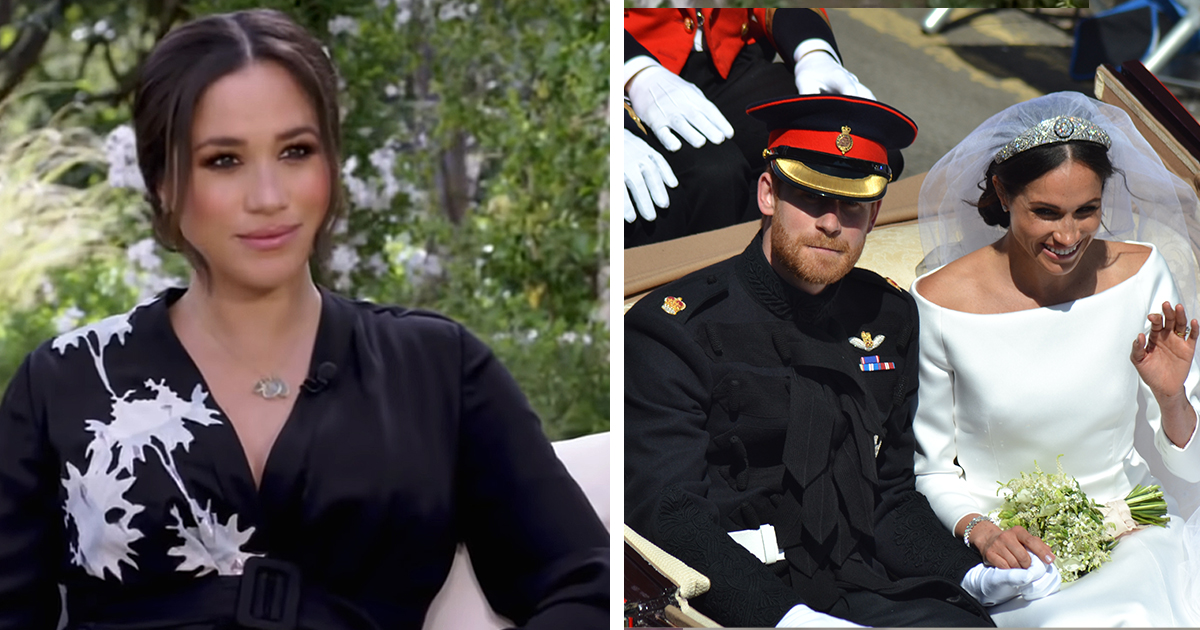 As the dust settles on perhaps the most explosive interview to a hit the royal family in decades there has been much speculation on some of the more damaging allegations made during the 2-hour sit down with Prince Harry and Meghan Markle.

Oprah Winfrey isn’t a stranger to interviewing royals after her 1996 interview with Sarah Ferguson following her split with Prince Andrew in which she admitted that royal life was no fairytale.

In Oprah’s latest royal interview which aired on March 7 in the U.S. and the following day in the U.K. the couple revealed shocking allegations of racism and Meghan admitted she felt suicidal while pregnant with Archie.

In a break from the formal sitdown with Oprah, Meghan and Harry were shown chatting with Oprah in the backyard of their $15 million home in Montecito, California.

While the three of them stand in the couple’s chicken coop Meghan admits that the wedding we all watched, and some of us cried over, in 2018 wasn’t their real wedding.

“Three days before our wedding, we got married,” Meghan revealed to Oprah.

“No one knows that, but we called the archbishop and we just said, ‘This thing, this spectacle is for the world, but we want our union between us.

“So the vows that we have framed in our room are just the two of us in our backyard with the Archbishop of Canterbury,” she continued.

As a barrage of questions emerged over the acuracy of this revelation,  an official spokesperson denied the claims days after.

According to some media reports the Church of England only allows legal wedding ceremonies to take place at registered religious buildings. Couples also need two witnesses.

Now the couple have admitted that a legal ceremony did not take place and a spokesperson for the royals told the publication that “the couple exchanged personal vows a few days before their official/legal wedding on May 19.”

The Church of England has declined to comment on the matter but Reverend Canon Giles Fraser, the rector of St. Mary Newington church in London, told Business Insider that “it was probably a blessing. But they got married legally at Windsor.”

The couple’s official royal wedding took place at St. George’s Chapel at Windsor Castle and was a star-studded affair with guests including Oprah Winfrey and George Clooney.

Almost 30 million Americans tuned into the watch the lavish affair while 18 million watched in the U.K., falling short of the 24 million Brits that tuned in to watch Prince William marry Kate Middleton in 2011, according to CNBC.

Harry and Meghan’s ceremony signaled a progression for the royal family and London gospel singers the Kingdom Choir performed at their beautiful culture-blending televised ceremony, so for the couple to reveal they were already married was a huge blow to millions.

Stephen Borton, the former official who issued the licence for the Sussexes’ wedding rejected Meghan’s claim saying she was “obviously confused and clearly misinformed.”

“While the archbishop might have been able to grant himself a special license in some circumstances, he may not have been able to overcome the legal need for weddings to be licensed to a building and to have two witnesses present, without which a wedding would not be ‘public,'” Benson said.

Meghan also revealed in the interview that she had never googled Prince Harry before she was set up on a blind date with him in July 2016.

Meghan who is pregnant with the couple’s second child said her expectation of what life would be like married to a royal what what most Americans assume: “It’s what you read in fairy tales.”

However, since the couple’s interview a blog post has emerged that Meghan allegedly wrote in 2014 about the “pomp” surrounding Prince William and Kate’s wedding.

“Little girls dream of being princesses. I, for one, was all about She-Ra, Princess of Power,” Meghan said in her now defunct blog, according to The Sun newspaper.

The bombshell interview also revealed that it wasn’t she who had made Kate cry during wedding preparations as reported in the media but the other way around.

After Oprah asked Meghan about tabloids reporting that she had made her soon-to-be sister in law cry days before marrying Prince Harry, Meghan answered, “No, the reverse happened.”

Meghan said she didn’t want “to be disparaging to anyone,” but simply wanted to clear the air.

“It was a really hard week of the wedding, and she was upset about something. But she owned it, and she apologized, and she brought me flowers and a note apologizing. She did what I would do if I knew that I hurt someone, to just take accountability for it.”

She said the issue related to the flower girls’ dresses but her allegation is one which Kate will probably never be able to comment on as the royal family is accustomed to keeping matters private.

However, Prince William broke royal protocol by responding to his brother and sister-in-law’s racist allegation against an unamed royal family member during a visit to an East London school.

Three days after the interview aired in the U.K. Prince William responded to reporters shouting questions at him saying: “We’re very much not a racist family.”

The Duke of Cambridge was responding to claims that Harry had told Meghan a family member had “concerns and conversations about how dark his (their son Archie’s) skin might be when he’s born.”

Meghan and Harry refused to identify which family member made the comment but Oprah revealed after the interview that Harry wanted to make it clear it was not the Queen or her husband Prince Phillip.

Do you think the cracks are beginning to show in this explosive interview or do you stand by everything the couple bravely revealed? Please comment below and share this article.