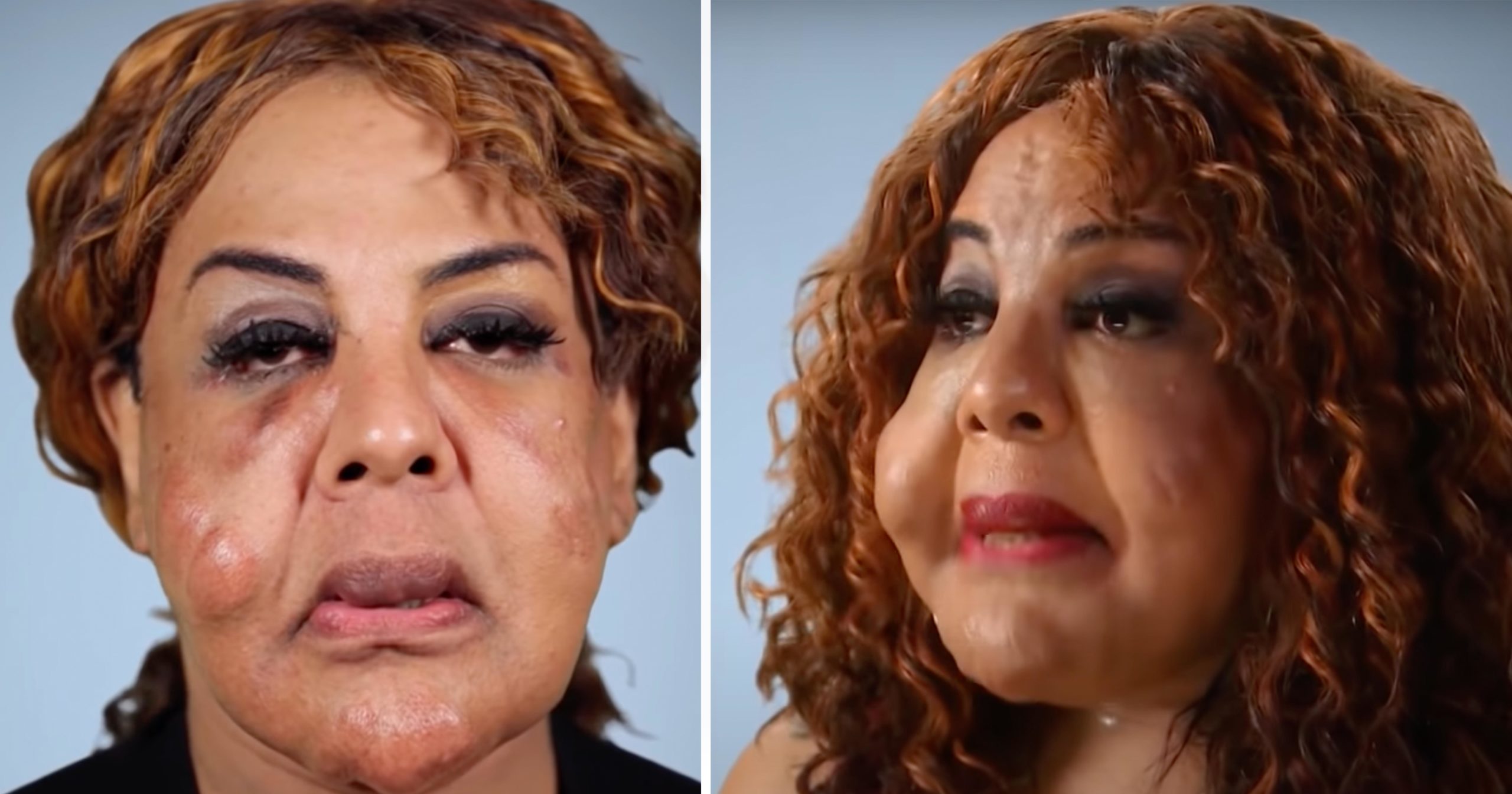 The trans woman was injected with a mix of substances including cement, superglue, and tire sealant. It hardened under the skin of her face, and several other parts of her body, and in the end, left her deformed.

Narinesingh appeared on the show Botched, where real surgeons helped her fix what Morris had done.

Here’s all you need to know about Rajee Narinesingh and her life – as well as what she looks like today!

Being comfortable in your own skin is the one of the most important things. It doesn’t matter if that means being bigger, skinnier, taller or shorter, bald, covered in hair, or anything else relating to appearance.

Sure, we all have things we’re perhaps not one-hundred percent happy with, but in the end, feeling comfortable and accepted for who you are is crucial in life. The key is to accept yourself, not chase acceptance from others.

While some deal with matters by changing hairstyles, going to the gym, or even having surgery, others feel like change at a more fundamental level is what’s needed.

Sadly, some people are born feeling like they aren’t comfortable in their own body with regards to their gender. This is why gender reassignment surgery exists, and the process is more popular today than ever before.

Once again, we will reiterate that you should always do whatever makes you happy and comfortable. However, we also advise that you see a legit specialist if you’re ever considering surgery – no matter what it’s for. Your body is on the line, so do your research well.

For trans person Rajee Narinesingh, gender reassignment might not have been the first thing on her mind. However, the New York native, born a boy, always felt that she was different. Growing up, she felt that she was a woman in her heart and, as she got older, Rajee decided that she wanted to undergo several plastic surgeries. It turns out that they were costly indeed.

Through desperation, Narinesingh decided to turn to the black market. In 2005, notorious “toxic tush doctor” Oneal Ron Morris proceeded to inject substances including cement and superglue into his patient, which hardened under the skin of her face, breast, hips, and even buttocks.

Narinesingh was horrified and never wanted to again leave her house. She didn’t know who to turn to for help, but fortunatly, not long after, she appeared on the television series Botched, where she got the assistance she needed.

Today, Narinesingh has become an influential spokesperson for many transgender people. Here’s all you need to know about her – and what she looks like today.

She was born male, but even when she was young, she realized that she wasn’t quite like the other boys in her neighborhood and school.

“In those days, we didn’t have computers, so you couldn’t Google, like, ‘what does it feel like when you’re a boy, and you feel like a girl?’ You just relate to what you see in your little community, and so what I really connected to was when I saw gay people, and I saw feminine gay people, and I knew I was feminine, sodice I thought that was me,” Rajee Narinesingh explained.

“Then when I started going to clubs and saw trans people, and I thought, ‘Wow! I think that’s more me.’ So it was a lot of revelation.”

“I thought about all the things I did when I was growing up. Like taking the basketball my dad had bought me. Instead of playing basketball with it, I was simulating pregnancy and actually pretending to give birth and be a mommy,” she said in another 2014 interview.

Narinesingh was raised in Philadelphia. As she grew older, she knew deep inside that she was a woman, so she decided to undergo several plastic surgeries to add fillers. Because they were so expense, she turned to the black market.

“The last thing I wanted was to look like a man in a dress. I wanted to be a beautiful woman,” Narinesingh said of her initial steps to transition.

“So I made the choice to get injections done – in our community, it is called pumping.”

In the mid-2000s, she ended up meeting Oneal Ron Morris. Morris was a self-proclaimed plastic surgeon who would later on be called “toxic tush doctor” by the media.

Injections made her body deformed

The injections were far from safe. Narinesingh received several injections that included illegal substances, including superglue and cement. Rajee claims she paid just $100 per session. According to Sun-Sentinel, she received ten injections from Morris between 2007 and 2010.

“It becomes so dire that you want to match your outside with your inside that you’re willing to roll the dice and take your chances,” she said at the time.

“As a transgender person, you’re thinking, ‘Oh, my God, I can start to look like I want to look like, and I don’t have to spend a lot of money,”

‘When it finally came to the day, I was more excited than nervous because I was finally going to be the woman I had always wanted to be. There was a room that she had set up where she did a lot of medical procedures. It appeared to be pretty sterile,” Narinesingh explained.

“It was like an extra bedroom that she had turned into a clinical area, and I would go in and pay the money. I got injections in my face and my hips, and my buttocks, and initially, I was fine. But then the nightmare started.”

Afterward, Rajee’s face and several other parts of her body became deformed. Large lumps formed under her cheeks, lips, and chin.

Statistics show that transgender people have been provoked and bothered by law enforcement in the US.

For example, a 2014 report on a national survey of LGBT people and people living with HIV found that 73% of respondents had experienced in-person contact with police in the past five years. Of those, 21% experienced hostile attitudes from officers, according to UCLA’s Williams Institute.

Based on the survey, it’s easy to understand Rajee Narinesingh’s next step. Even though she understood that Morris’s injections couldn’t have been legal, she decided not to go to the police. She was simply too embarrassed.

Narinesingh was even afraid of leaving her house, ashamed of what had happened and how she looked.

“I felt like a monster, I really did,” she told Barcroft Media, as quoted by the NY Post. “A sideshow circus clown.”

Thanks to Martin, Narinesingh went from “victim to victorious.”

At the same time,, Rajee got her confidence back, and even started dating.

“Now I’m feeling more confident, and with a good bit of makeup, I can achieve somewhat of an exotic look,” she explained.

“Recently, this guy said that being with me is like being with a sexy dragon. I didn’t know whether to slap him or kiss him.”

Furthermore, help arrived in the form of the E! reality series Botched in 2016. Cosmetic surgeons Dr. Terry Dubrow and Dr. Paul Nassif decided to help Rajee by giving her treatments without cost, further softening the bumps on her face.

In the beginning, it wasn’t certain that Rajee Narinesingh was to be featured on the show. Initially, in 2015, she was turned away due to the potential risks to her wellbeing. Fortunately, a year later, they found a way to help her.

“I have to make sure my plan is a conservative one, it’s a smart one, and it doesn’t take any undo careless risks with Rajee’s face,” Dr. Dubrow said on the show Botched.

Over seven weeks, Narinesingh underwent four surgeries to remove all the toxic fillers Oneal Ron Morris had put into her body.

Months after the procedures, Rajee explained that she still had some nodules in her breasts and buttocks. But the most important thing is that she felt that her transformed face had given her her self-confidence back – and finally, she could see herself in the mirror.

“My confidence has definitely improved,” Narinesingh told Barcroft. “It has changed my life. It really has.”

“I know I’m a big personality, so I’m always going to get stares, but now the stares are a little different.”

This is Rajee Narinesingh today

Oneal Ron Morris, meanwhile, would eventually answer for her dangerous surgeries. In 2017, she was sentenced to 10 years in prison after one of her patients died. In February 2021, Rajee Narinesingh got a message from Morris.

She posted her response through her Instagram page, and even though Morris said she had been released, Narinesingh claimed that Oneal wasn’t to be released until 2026. Morris asked for her forgiveness, and Rajee accepted.

“What I have become more aware of as I have lived my life is that if we can get stronger from the hardships we go through and learn from the mistakes we make, then they become blessings. I feel the sincerity of your spirit, Sis, and I want you to know that I wish the very best for you,” Rajee Narinesingh said in her response to the “toxic tush doctor.”

So, what is Rajee Narinesingh doing today? The transgender woman has become a public figure and describes herself as an American activist, actress, mystic, and author. She’s been featured on more than 30 television shows worldwide, and has written three books about her life and experiences.

She now lives in Florida, where she works with the LGBTQ community and several organizations. Moreover, she helps to spread messages about HIV prevention and living with HIV.

“I consider that a blessing”

Rajee shares many photos of herself on her Instagram, and she looks fantastic!

“I call myself a world activist or a community activist. You know, because of my advocacy for the black-market injections took me global! No, it literally did! And now I hear from people in Uganda and Australia, honey. It’s crazy! I mean, Pakistan! Wow, it’s amazing,” Rajee told The Body.

“So that’s one of the blessings. I consider the whole situation with my black-market injections and all the suffering I went through — I consider that a blessing, because it gave me a bigger platform to do my advocacy and my activism.”

“You know, even before all the corrective surgery,” she added, “I thought, ‘Hey, this happened to me, and if I can share my story, educate people, and prevent this from happening to someone else, then I’ve made lemon meringue pie out of lemons.'”

Rajee Narinesingh is such a brave individual, and we are so happy that she managed to get through the nightmare of the horrible injections. We wish her all the best in the future.