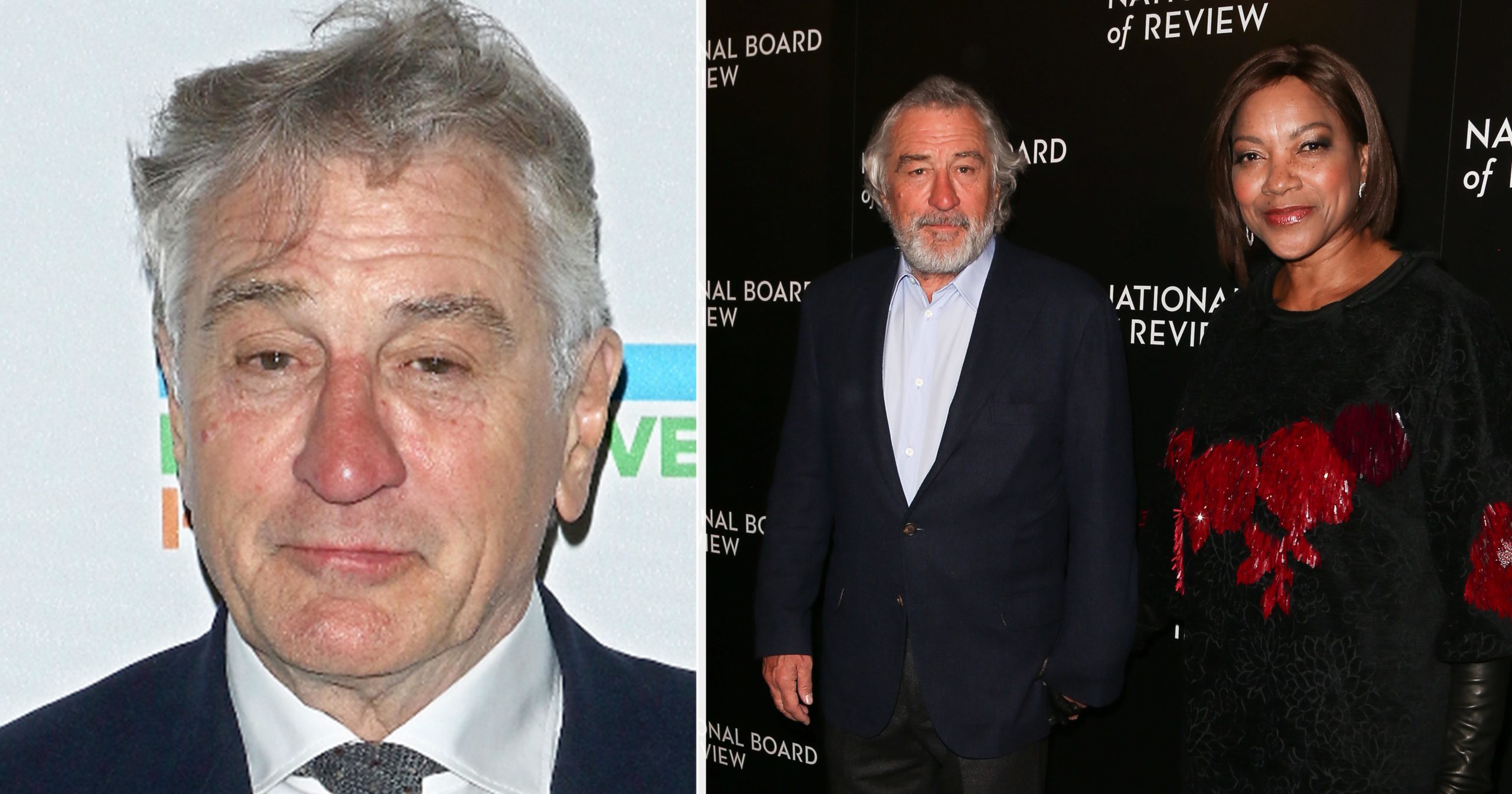 Robert De Niro has lived a full life within the world of Hollywood showbiz. He is rightly seen as one of the greatest actors ever after having won numerous awards, including two Oscars.

At the same time as De Niro has been hugely successful on-screen, he has led a quiet private life. He’s been married twice and only split up with his second wife, Grace Hightower, in 2018.

Though their divorce seemed to be pretty routine at first, new information has now emerged courtesy of De Niro’s his ex-wife. Not only that, but if De Niro’s lawyer is to be believed, the well-known actor is being “forced to work” to finance Hightower’s luxurious lifestyle.

It’s pretty common for actors to marry other actors within the Hollywood celebrity sphere. In fact, it’s rarer that an actor marries a person who is nothing to do with the business.

Being together with another who knows exactly what it’s like to be recognized everywhere perhaps makes it all easier to deal with. Of course, though it might seem like the glamorous life of a Hollywood star should be straight forward, things are usually far from simple.

Just as with “regular people”, marriages within Hollywood can also collapse. For some, unions crash and burn within a couple of years or even months, though there are other examples where Hollywood marriages have worked out jJust look at Mark Harmon and his wife Pam Dawber, who have been married for over 30 years).

One other actor who has had longer marriages is Robert De Niro. The legendary film figure has been married twice – his second marriage to Grace Hightower, which lasted 21 years, ended in 2018.

In more recent times, it’s been rumored that De Niro has been dating another woman. But even though it’s been three years since his split from Hightower, it appears as though his ex-wife’s luxurious lifestyle is proving a problem for him.

But before we get to De Niro’s personal life, let’s take a look at his long and successful career.

Born on August 17, 1943, in New York City, De Niro’s parents were both successful artists. His mother was a gifted painter, while his father worked as a painter and a poet.

By a young age, De Niro loved the movies. He oftentimes went with his father, and was especially interested in films featuring Greta Garbo. Since his mother worked as a copyeditor for a dramatic workshop, De Niro got acting classes for free. At 10 years of age, he made his stage debut as the lion in The Wizard of Oz.

It didn’t take long before his talent was discovered.

De Niro was eventually accepted to the prestigious High School of Music and Art in New York. He felt unprepared, however, and so dropped out just days later.

At 16, De Niro realized that he wanted to pursue a career in acting after all. His mother took all the money she’d saved for his college tuition, and instead put it towards her son’s dream. He went on to study acting at the Conservatory of Acting, where he had famous actress Stella Adler as his teacher.

At the time, De Niro actually didn’t feel that he was a special talent.

“I was totally invisible in her class, I was a student that she, I don’t think, really remembered. I took a lot from her. But I was not a special student. I was there and learned a lot,” De Niro recalled, adding that he doesn’t feel as though he’s ever had a mentor.

“Stella Adler was really good. A bit full of herself, but, whatever. There were no mentors. There were people I liked, people like Brando, James Dean, Montgomery Clift. They all had something more… An intangible feeling… Heart, soul… It wasn’t just about interpreting your character, it was something so much more than that.”

In 1968, De Niro had his debut proper when he starred in the film Greetings. With some more work under his belt, his big breakthrough came in the 1973 film Bang the Drum Slowly.

Growing up in New York City, De Niro became friends with director Martin Scorsese at a young age. Their friendship would turn out to be a very important aspect of De Niro’s life, as he got the role in Scorsese’s Mean Streets. In 1974, his life changed forever and he became known as one of the best actors around.

De Niro starred as Vito Corleone in Francis Ford Coppola’s The Godfather: Part II – his legendary performance earned him an Academy Award for Best Actor in a Supporting Role.

“Getting the part changed my career, or revved it up if you will. Then winning the Academy Award, you’re kind of guaranteed that you’re going to work again as an actor,” De Niro explained.

“The way I remember it, the movies that were becoming the blockbuster type films, Godfather part one was the first one that I remember in my lifetime as a young man.

“Then there was Jaws, then there was Godfather II, so these movies started coming out that were huge. The anticipation of Godfather II was really big. Luckily, Francis [Ford Coppola] wanted me to do it.”

By this point, De Niro had become one of Hollywood’s top actors. But it wasn’t just his career that was going well. Around the same time, De Niro settled down and married his first wife, actress and singer Diahnne Abbott, in 1976. The same year, the couple welcomed son Raphael De Niro, with Robert also adopting Diahnne’s daughter Drena from a previous marriage.

In 1988, De Niro and Diahnne divorced. The actor continued working on many films, and 10 years after the divorce, he married actress Grace Hightower.

Before their marriage, De Niro had dated model Toukie Smith for eight years, having twins via in vitro fertilization and a surrogate mother.

De Niro and Hightower actually met for the first time back at a London nightclub in 1987. She worked at the famous Mr. Chow restaurant in London at the time.

A little more than a decade later, the couple married at their home in Marbletown, New York. The ceremony was a small, intimate one, with actors such as Harvey Keitel and Joe Pesci in attendance.

Of their early relationship, Grace said that “it was an ease-in. It wasn’t a whirlwind.”

A year later, the couple announced the birth of their son, Elliot. The two parents decided to keep the lives of their children very private. In 2016, however, De Niro decided to spread awareness on autism by publicly revealing that Elliot had been diagnosed with the condition.

“Grace and I have a child with autism and we believe it is critical that all of the issues surrounding the causes of autism be openly discussed and examined,” he said.

Sadly, it wasn’t long before De Niro and Hightower’s marriage devolved into a broken one. In 1999, the Godfather actor filed for divorce. As reported by People, a friend of his said that “Bobby was just not working hard enough at his marriage to Grace.”

The two co-parented Elliot for a year before a custody battle erupted. De Niro and Grace headed to court, and many expected things would turn ugly. But before they could go too far, “Bobby” and his wife made amends and the divorce was never finalized.

In 2004, the two renewed their vows at their home, with friends such as Meryl Streep, Martin Scorsese, and Ben Stiller in attendance.

“They can make sure this one sticks,” De Niro said at the ceremony.

Over the course of her marriage to De Niro, Grace has done many things, including working as an actress and a singer. She even started her own java brand called Coffee of Grace.

The couple welcomed a daughter, Helen, in 2011. But even though they had renewed their vows to once again show their love for one another, theirs wasn’t a bond that would last forever.

In November of 2018, De Niro and Hightower announced that they were splitting after 20 years of marriage.

“Grace and I have two beautiful children together. We are entering a period of transition in our relationship which is a difficult but constructive process,” the statement from De Niro read.

“I honor Grace as a wonderful mother and ask for privacy and respect from all as we proceed to develop our roles as partners in parenting.”

Besides acting, De Niro has turned into an entrepreneur, having invested in several restaurants such as Nobu and the Tribeca Grill, as well as the Greenwich Hotel in New York City.

When the pandemic broke out, many restaurants, hotels, and other businesses suffered huge losses. De Niro was caught in that storm, and according to his lawyer, he’s now forced to work to provide for him and his ex-wife.

The actual details of the divorce settlement between 77-year-old De Niro and his ex-wife haven’t reached the public. According to several news outlets, however, the actor is having a tough time keeping up with his ex-wife’s luxurious lifestyle.

De Niro’s lawyer, Caroline Krauss, claims that Hightower has “a thirst for Stella McCartney” and has even bought a $1 million-plus diamond ring, as reported by Page Six. Business Insider, meanwhile, write that De Niro has cut Grace’s monthly credit card limit from $100,000 to $50,000 in a bid to cut down on her spendings.

Now, a legal battle is on, and the 77-year-old De Niro is bleeding money. According to Krauss, his restaurants have suffered millions in losses because of the pandemic.

“Mr. De Niro is 77 years old, and while he loves his craft, he should not be forced to work at this prodigious pace because he has to,” Krauss told a Manhattan judge during a virtual divorce hearing, as reported by Page Six.

Fires back against the actor

“When does that stop? When does he get the opportunity to not take every project that comes along and not work six-day weeks, 12-hour days so he can keep pace with Ms. Hightower’s thirst for Stella McCartney?” she added.

“He could get sick tomorrow, and the party’s over.”

Hightower’s lawyer Kevin McDonough, on the other hand, fired back at De Niro, claiming that talk of his finances being in disarray is “nonsense”.

“I’m not a believer that a man who has an admitted worth of $500 million and makes $30 million a year, all of a sudden in March he needs to cut down [spousal support] by 50 percent and ban her from the house,” McDonough said.

Time will tell whether Robert De Niro or his former wife Grace Hightower will win in court. What do you make of this? Please leave your opinion in the comment section.