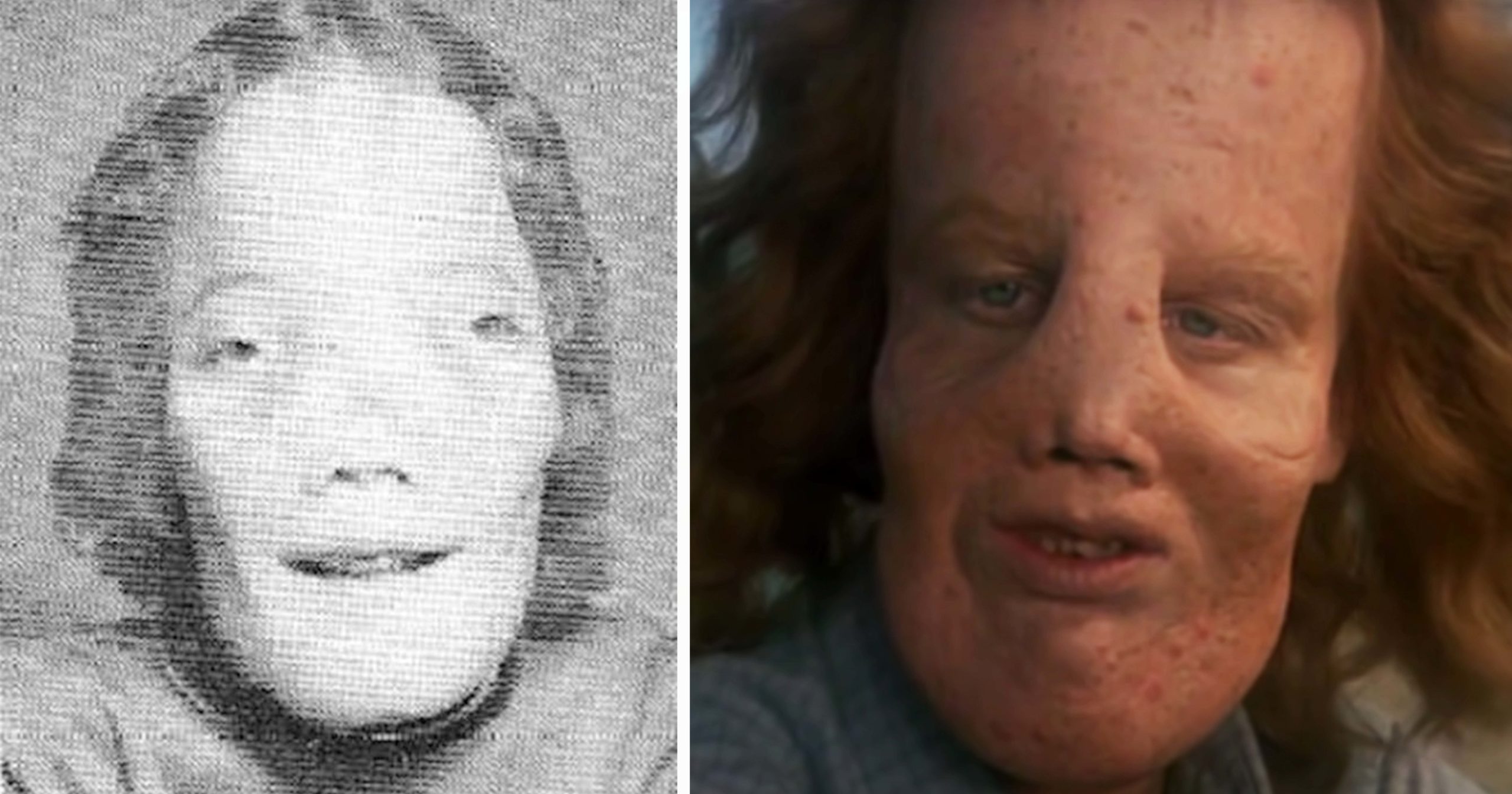 When Rocky Dennis was born in 1961, the little boy with bright eyes seemed like any other baby. When he was just two years old, however his family’s life would be changed forever.

During a routine tonsillectomy, an X-ray technician picked up irregularities in Rocky’s skull. There was a calcium build up in his skull which was distorting his facial features.

Doctors predicted that Rocky wouldn’t live past his seventh birthday. But the little boy beat the odds, becoming a huge inspiration for many in the process.

Here’s all you need to know about the extraordinary life of Rocky Dennis – and how he, by accident, became a worldwide star thanks to a hospital nurse through the 1985 film Mask.

All of us are born different and unique. Sure, there might be similarities through things like our hobbies, and we might share things like hair color, interests, or other facets of appearances. In the end, though, the most important thing for all us is to accept others for who they are.

No matter how or where we are born, if we have physical or mental disabilities or a condition that makes us look “different” from the norm, we’re all worthy of the same respect. We should all have the opportunity to live the life we want to lead.

As individuals, we must never forget that, while it’s vital we remind each other never to judge someone else before getting to know them.

The incredible life of Rocky Dennis

With this in mind, we believe it’s crucial to tell the story about Rocky Dennis, an extraordinary and incredible young boy whose life changed forever when he was only two years of age.

On December 4, 1961, Rocky Dennis was born in Glenora, California. His mother, Rusty Dennis (later Mason), had given birth to a beautiful little boy. Not long after, the family moved to the town of Covina, California.

Then, when he was two years of age – during a routine tonsillectomy – Rocky’s life changed forever.

Rusty was given the news no mother should ever get. An X-ray technician had seen some irregularities in Rocky’s skull, and further testing at the UCLA Medical Center confirmed that the boy had an extremely rare condition. Abnormal calcium deposits were pushing his eyes towards the edges of his head, while simultaneously twisting his nose out of shape.

Despite his tender years, Rocky was told that he would lose his eyesight and hearing. Most tragically, the pressure created by the calcium deposits would, in the end, destroy his brain.

Sadly, Rusty was warned that her son wouldn’t live past his seventh birthday.

“I didn’t allow the doctors to talk him into death,” the mother told United Press International.

“You know, what you believe works and he believed he could stick around as long as he wanted to.”

Rusty was determined to never stop her son from living the life he wanted to. She wanted him to have the same experiences as any other child, and was of the opinion that he go to school.

At the same time, Rusty knew that their lives would change forever as they left the doctor’s office. Doctors had even told her that her son might be blind by the age of six. They said he would never be able to read; teachers advised Rusty that she shouldn’t enroll him at a public school.

Rusty, though, – any other mother would be – was confident that her child could do anything, so Rocky entered school at age six.

“They tried to say his intelligence was impaired,but it wasn’t true,” Rusty told People. “I think they wanted to keep him out of the classroom because [they thought] it would bother the other kids’ parents.”

Rocky’s mother had been married once before she met Roy, with whom she had Rocky. They split in 1971 – when Rocky was ten years old. Rusty raised her beloved son in the main, though Roy also remained close to Rocky following the divorce.

Now, paying for all of Rocky’s medical bills wasn’t easy, even though they were covered in large part by genetic research organizations. Rocky had been advised to take painkillers to relieve his headaches but, along with his mother, he was able to learn a particular biofeedback method that worked instead.

Although Rocky was naturally different from his classmates, they reportedly never treated him as such.

“I taught him he could do anything he wanted to do”

Growing up, he did his best to fit in, engaging in the same activities any other child his age might. This included a less-than-legal endeavor that saw him sell neighbors the same newspapers he had stolen from their lawn. He also earned money through babysitting – the children were apparently never put off by his deformed head.

“I taught him he could do anything he wanted to do. He didn’t believe in being blind: he read all the time,” Rusty reminisced. “Most of the time, any problems or pain he had he was able to deal with on a psychic level.”

In short, Rusty Dennis was a normal child, and he loved all the stuff that kids do. One day, though, when he was seven, Rusty decided it was time to set the record straight with him. She and her son were on a trip to Las Vegas, when in the lobby of the Hacienda Resort Hotel, Dennis spotted a female dwarf.

The woman appeared out of proportion while making her way through the crowd, and Dennis happened to giggle as she walked by, much to Rusty’s disappointment.

Rusty – then in first grade – nodded.

Though, as mentioned, Rocky’s mother tried to give him a normal life, he could be reminded from time to time of the reality of his situation.

Rocky Dennis was a great student

Certain people had preconceptions about him just because he looked different, even though he was a kind, friendly and loving boy. He attended Sandburg Junior High School, where one teacher named Barbara Silva worked.

In 2013, she spoke about the time she met Rocky at school. He had walked into her classroom on the first day of the 1976 school year. At first, she thought she had seen a boy wearing a Halloween mask, one that was way too big for his head.

As a young teacher, Silva had already decided that she needed to be straight with the children, right from the start, if she was to get the respect she deserved. She resolved to tell take the boy to take off his mask once the bell rang – only for her jaw to drop when she approached him.

The boy was Rocky Dennis. He told her that he probably was in the wrong class, and left the room.

“Had I said what I was going to say to Rocky that first day, I think I would have gone to the principal’s office and resigned right there,” Barbara told Patch.

“That would have been the end of my teaching career.”

Though Barbara wasn’t Rocky’s primary teacher, she remembered him as a very bright young student with a great sense of humor. He became very popular among his classmates, and no one cared about his appearance.

“If anyone showed signs that his appearance made them uncomfortable, he would say, kind of matter-of-factly, ‘If I make you uncomfortable, you can move. But I can’t change my face,'” Barbara recalled Rocky telling a classmate.

“It would be an icebreaker. He would put you at ease by addressing what was obviously bothering you, and say, ‘It’s okay, I get it.'”

Rocky Dennis passed away, at age 17

By all accounts, Rocky was a great student. On graduation day from Sandburg Junior High School, he collected his diploma wearing a new suit. He also got a gold certificate, reading “Rocky Dennis – Honors Student.”

Halloween, meanwhile, became one of his favorite weekends of the year, when he could go “trick or treating” with the other children in the neighborhood and around the city.

Nobody knew how he looked underneath his mask – and Rocky had a sense of humor only a kid with a golden heart could have.

“How cute, he’s wearing two masks! Take off your other one, too,'” his mother Rusty recalled one stranger saying.

The boy answered: “‘Gee, it must be stuck on’. Rocky always got lots of candy.”

He had reportedly shown signs of self-pity mere days before, which Rusty thought was strange. Rocky told his mother that he was sorry for the way he had been born, and apologized for being such a problematic child.

On October 3, Rusty and Rocky went out to dinner. By this point, Rocky had become frail, and so Rusty sent him to bed once they got home, saying, “Go make your headache better.”

It was the last time she saw him alive.

“I hugged him and said goodbye”

When she walked into his bedroom the following day, Rocky had passed away.

“He was already gone….” Rusty told People. “I hugged him and said goodbye, but he wasn’t there.”

Rusty knew that her beloved son could make a difference even after his passing. She donated Rocky’s body to the UCLA genetics research center. Even though he wasn’t with her anymore, Rusty recalled him coming back to her a year later.

“The year after he died. I woke up in the middle of the night, and there he was, sitting in a chair in my bedroom. He said, ‘Hi, Mom. I’m on my way to San Francisco. I’ll see you there.'”

Now, it wasn’t always a certain thing that the world would get to hear about brave Rocky Dennis. In fact, without Anna Hamilton Phelan, we might not have known about his life at all.

In 1978 – the same year Rocky passed away – Phelan happened to be working in the genetics units of a hospital when she met him for the first time. She sat down with him and said: “I bet you’ve got a story to tell?”

“He kind of smiled and looked up a time and replied, ‘I guess I do,'” she told the St Louis Post-Dispatch in 1985.

Phelan didn’t see Rocky again after their short meeting, but she wanted to know everything about him. She did her research, met with people that had known him, and later spoke with his mother, Rusty.

Her work resulted in a screenplay for the film Mask, released in 1985. Eric Stoltz starred as Rocky – and Cher as Rusty. The film won an Academy Award for Best Makeup, and Cher herself won the award for Best Actress at the legendary Cannes Film Festival.

Rusty got $15,000 for the rights to her story. For Cher, the film was a truly special experience. Not only because she got to know Rocky Dennis and his story, but also because she became deeply touched by the condition. She decided that she wanted to do something.

After filming for Mask wrapped up, Cher committed herself to help craniofacially deformed individuals around the country. In 1989, she was named honorary chairman of the International Craniofacial Foundation.

“You know, if Rocky Dennis lived today, the doctors may have been able to help him,” Cher told Parade Magazine in 1994.

“All a craniofacial wants is not to be abnormal,” she added.

“You know, they just want to walk and not be looked at. People are always draw to what they think is beautiful, and they tend to think that beautiful people are nice people. One has no bearing on the other. Everything is so packaged now what there is a perfection orientation that we don’t want to look at people that aren’t completely beautiful.”

Rocky Dennis’ story is so inspiring. He was a genuinely loving and wonderful little boy that deserved a much longer life. May he rest in peace.

Please, share this article with friends and family on Facebook if you think inner beauty is more important than looks.