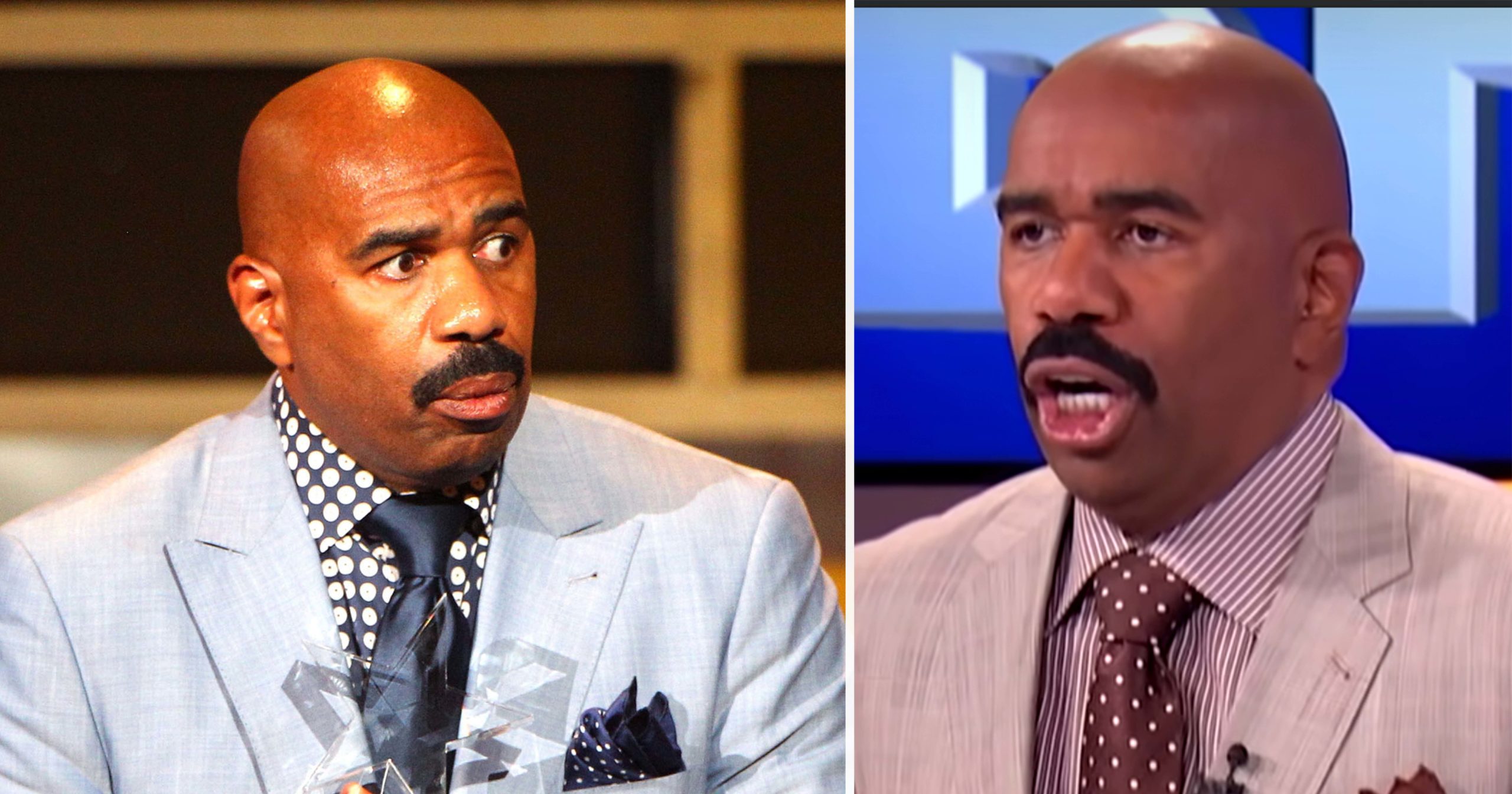 Steve Harvey has become one of the most beloved talk show hosts around. For decades, the West Virginia native has made people laugh with his comedy. As of today, he hosts game show Family Feud.

But in fact, Harvey’s life hasn’t always been easy. He had considerable problems in school thanks to a stutter, and for a while was forced to live in his car while struggling to feed his family.

These days, Harvey and his family have it very good indeed. Even though he’s turned 64, the famous TV host has recently transformed himself into something of a fashion guru.

We’ve even got the pictures to confirm it!

Steve Harvey has grown into what some would call a television superstar in the last few decades. Not only is he very well-known in the US, but the fact that clips from his game show have spread across the internet has made him famous in other parts of the world as well.

To be honest, there are few things more funny than seeing Steve Harvey look surprised or offended at a contestant’s answer, or just simply listening to him dishing out his hilarious one-liners.

All in all, Harvey has made a great name for himself, but his hasn’t been a simple and easy road. No, Harvey went through plenty of rough times before he finally made it. It was only down to his dedication and motivation that he managed to succeed.

So how did Steve Harvey get to this point? Here’s all you need to know!

Even as a young kid, Steve Harvey was forced to contend with issues.

Born Broderick Steven Harvey on January 17, 1957, in Welch, West Virginia, he was the youngest of five children to parents Eloise and Jesse Harvey.

Steve Harvey had a serious stutter

Growing up, Steve had a stutter, which made him very uncomfortable around people.

In 6th grade, Harvey and his classmates were supposed to pen down their dream job. He wrote that he wanted to become an entertainer, only for the teacher who gave the assignment to ridicule him in front of the whole class.

The teacher thought that he could never become an entertainer with his stutter, and even went as far as to call Harvey’s mother to tell her that her son had to dream about something else.

But young Steve had a dream that he would pursue no matter what other people thought. Instead of laying down and accepting that it was impossible, he sought the support he needed.

It was his speech impediment that gave Harvey low self-esteem. However, his family backed his dream to the moon and back, and always encouraged him to strive for greatness.

As a child, he loved making people laugh. With regards to his stutter, it was a local deli man who helped him slow down his speech and calm down while he was talking. In the end, he outgrew his stutter – and was able to exact the sweetest revenge on his teacher in the process.

Speaking with Oprah, Harvey revealed that he would never forget the day his teacher mocked him for stating that his dream was to become an entertainer.

First work as a comedian

Instead of getting petty, Harvey decided to “kill with kindness.”

“Every year when the teacher was living, I used to send her a TV for Christmas, cause I wanted her to see me,” he explained.

Harvey and his family moved to Cleveland when he was young. In 1974, he graduated from Glenville High School.

After graduation, Steve went on to study at West Virginia University. He thereafter worked several jobs, including as an insurance salesman and postman – but didn’t find his true calling.

A few years later, Harvey finally stumbled upon his real passion. In 1985, he started performing as a stand-up comedian for the first time, and spent years perfecting his routine and steadily becoming a well-known act.

He eventually landed his first headline gig at the Bruce Ayer’s Comedy Club in Birmingham, Alabama.

However, his early days as a comedian were a very tough ride. In 1985, Harvey won $50 in a comedy competition. For him, that was a sign that he had the potential to go far.

Steve Harvey was forced to live in his car

“I quit my job the next day,” Harvey recalled. “I informed my supervisor that I was leaving to pursue a career in comedy. My boss discouraged me from applying by telling me: ‘Steve, you’re not even funny.'”

In the beginning, things hardly went the way Harvey expected them to. Speaking to People, he explained that he was homeless for three years. He even had to steal things to make ends meet.

“It was crushing,” Harvey said. “I realized, ‘You’re on your own. You have nothing or no one.’ All I knew was that I could make people laugh.”

Harvey lived out of his car, using a small cooler as a refrigerator and showering in different rest stop bathrooms. He survived mostly on sandwiches. To get to comedy gigs, he was forced to steal fuel from gas stations.

So what happened? Well, as reported by People, Steve Harvey made approximately $3,000 in his first year of being a comedian. He and his wife Marcia had separated – their divorce finalized in 1994 – and Harvey’s relationship with his daughter had fallen apart.

“I’m married, I have twins. I’m supposed to provide for them, but I had to take this chance,” he recalled thinking.

75% of his paycheck went straight to Marcia and twins Brandi and Karli. As a result, Steve had pretty much no money left for himself.

“I sat down and started crying”

He explains it was an “ugly” period of his life, and once, while trying to wash up in the sink of a hotel restroom, he was forced to hide from guests for hours until they had left.

“I sat down and started crying, but a voice said, ‘If you keep going, I’m going to take you places you’ve never been,'” Harvey told People.

“It was like God said, ‘Don’t quit, you’re almost there. Not long after, he finally got his big break in the form of a televised gig at the Apollo.”

The Apollo changed Steve’s life and career. In 1993, he became the host of the program Showtime at the Apollo, which he stayed on until 2000. At that point, he also landed his sitcom, The Steve Harvey Show, which became his next career springboard.

Working with Cedric the Entertainer – who starred as Harvey’s best friend on the show – Steve went on to appear in the now-classic The Original Kings of Comedy alongside Bernie Mac. The comedy film became a huge success, with Harvey turning into a celebrated comedian all over the US.

After the success of The Original Kings of Comedy, Harvey also got his radio show, The Steve Harvey Morning Show, and as such became a prominent radio personality. He still wanted to pursue a career in television and comedy, and hosted a short-lived reality television show in the mid-2000s. He even tried his hand at acting.

Harvey was excellent in front of the camera – as well as in the radio studio – bug he wanted to do even more. So he started writing, and in 2009 he became a best-selling author with the relationship advice book Act Like a Lady, Think Like a Man. He followed up with the sequel Straight Talk, No Chaser in 2010, which also became a best-seller.

Though it might seem like Harvey has turned every project into gold, he has had his fair share of ups and downs. For him, it’s important to highlight that not all of his projects have turned out great.

“If I could get back the money I lost in bad investments, I could quit working right now. I could stop. I’ve made so many bad decisions,” he told Good Housekeeping. “The biggest investment I’ve ever made was my investment in people. That’s been my greatest investment. That return has been the greatest thing I’ve ever seen.”

He added: “Every time you overcome one challenge, I’ve got news for you; there’s another one. Another one right over there. The road to success is always under construction. Cause what do you know?”

Steve Harvey became known worldwide after landing the role as the next host of the iconic game show Family Feud. Harvey, with his funny approach to questions and answers from contestants on the show, became a phenomenon on the internet as social media spread across the world.

Harvey has been happily married to Marjorie Bridges since 2007, but it’s fair to say he’s undergone some changes over the years.

We might be used to seeing Steve Harvey in a regular, classic suit. But in fact, all indications are that the 64-year-old is turning into a fashion guru.

Via his Instagram page, Steve Harvey’s shared many photos flaunting his new style – we think he looks terrific!

Apparently, it all started when Harvey’s wife and their stylist Elly Karamoh “hatched a plan” to change Steve’s many game show suits into something completely different. Not long after that, the Family Feud host became a style icon.

“So that was the beginning of it right there: they took the shackles off and didn’t require that I dress as a game show host all the time,” he added.

We can imagine maintaining his wardrobe is costly, but we’re confident he can afford it. According to Celebrity Net Worth, Harvey has a net worth of roughly £200 million.

It’s not a stretch to say that Steve is casting a new light on himself and proving that it’s never too late to change the perception of yourself or how you want to look.

One thing, he insists, will never change. And that’s his iconic mustache.

“I took the mustache off when I was in college when I was pledging. When I took it off, I discovered something: the distance from the top of my top lip to the tip of my nose is about four feet. It looks like a sheet of plywood if I take my mustache off. So that can’t happen, partner.”

Steve Harvey looks fantastic in these photos, and we’re so impressed that he’s dared to change his style. His life story sure is inspirational – we feel like everyone can benefit from reading about it.