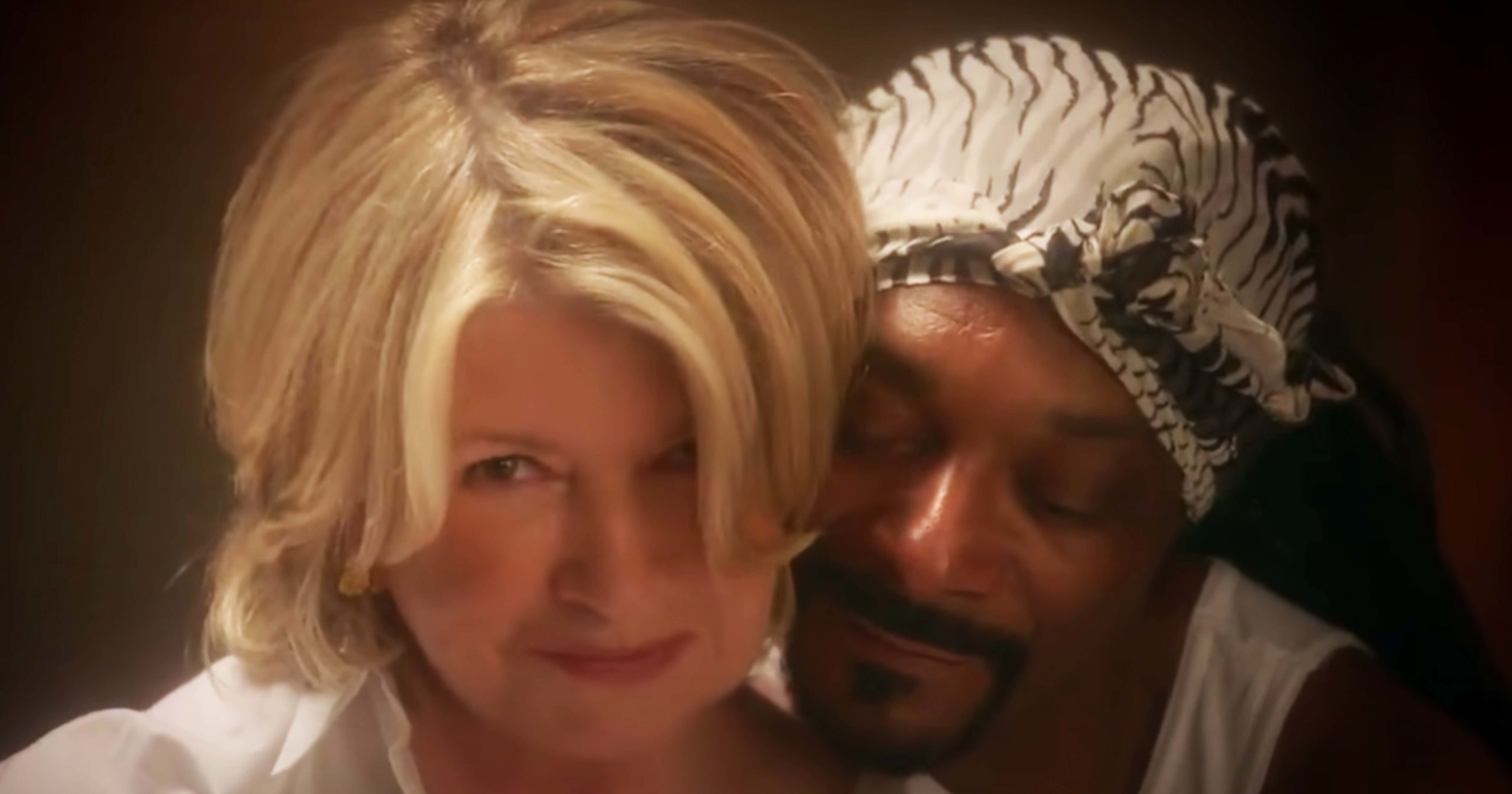 Most people were already familiar with Martha Stewart thanks to her own TV show, magazine and litany of cookbooks and homeware. However, in the last decade, she has found another fan base thanks to her amazing friendship with rapper Snoop Dogg.

Snoop Dogg and Martha Stewart have one of the most wholesome and surprising celebrity friendships. And even though there’s a 30-year age difference between them, they have created a strong bond which has been turned into a successful television show.

This is all you need to know about Martha Stewart’s unlikely friendship with the legendary rapper – and how she got there in the first place.

Martha Stewart was born Martha Kostyra on Aug 3, 1941, in New Jersey. She was the second of six children and grew up in a middle-class community in Nutley, New Jersey, not too far from New York City.

At the age of 13, Stewart started working as a model, appearing in fashion shows, print advertisements., and on television,

“My neighbor, a beautiful ballerina, was modeling for Stuart Models, and she had a contract,” Martha Stewart recalled.

“Her parents said to me, ‘Martha, you’re so pretty. You should be modeling also.’ So I did. I signed with Ford Models and was immediately signed up for TV commercials. I was the all-American girl.”

“I was so skinny and so perfect for modeling, but I didn’t know that I was beautiful. That was my only problem,” she explained in an interview with People.

“I knew that I could model, I knew I could pose for pictures, but I was not sexy, and I was not provocative,” Stewart added. “That feeling never came. It still hasn’t come. I’m waiting for that day.”

Martha Stewart found the modeling business challenging. But her next career move would be equally as tough. The New Jersey native attended Barnard College and started working as a stockbroker at an all-male firm.

“I lasted in that business for about eight years, working in a firm of all men. Only one woman owned a seat on the New York Stock Exchange at that time. I’m not intimidated by men; I never was, Martha Stewart told People.

Work as a stockbroker

“But men actually welcomed me to their offices. We wore hot pants to work. I still have my pale, peachy-pink ones and my chocolate-brown ones. I wore them with either high heels, bare legs, or tights. Elegant but also crazy. Like, how can you go to work in short-shorts? But I didn’t think twice about it. I was totally respected.”

She continued: “I didn’t even know what a glass ceiling was until somebody explained it to me, because being a woman and being a businesswoman was all one and the same to me. I had a very successful career in the stock market, and I sometimes regret not staying in that business because becoming an investment banker would’ve been pretty fabulous. But I was lured to the home.”

As was the case during her modeling days, Stewart’s work ethic was something that everyone noticed, and she was great at her job.

Being at home with her daughter and husband meant Martha had more time thinking about what she wanted to do next. And in 1976, her new idea became a reality.

Martha Stewart decided to start an at-home catering business while Alexis attended school in Westport, Connecticut. While it was time-consuming, it became a bonding experience between Martha and her daughter, even though they’ve had a complex relationship

Martha Stewart’s catering business soon became a huge success. She became known for her menus and creative presentations, and just a decade later, her company Martha Stewart Inc. had grown into a million-dollar industry.

Stewart was working with several companies and celebrities and expanded by releasing her first book, Entertaining.

Stewart released several other books in the coming years. However, her devotion to work took a toll personally. In 1990, she and her husband Andy divorced.

Like any other person, Martha Stewart has had her ups and downs in life. Unfortunately, her divorce was one of those lows, with the separation becoming toxic.

“Getting divorced was a terrible thing for me because we were the first to divorce in my family,” she told the Daily Mail. “And that we haven’t spoken since the divorce is even more painful.”

Stewart became a household name in the US, and her company Martha Stewart Living Omnimedia went public in 1999.

She released a couple of magazines and recipe publications and a top-rated cable television show and website. Further, Stewart became the first self-made female billionaire. But in the end, it’s all about the people you surround yourself with – and for Martha Stewart, that meant family and friends.

About 13 years ago, she made the most unexpected friendship — with rapper Snoop Dogg.

They hit it off great, and today, Martha, 80, and Snoop, 50, are great friends, despite their age difference of 30 years. And their story is truly remarkable.

“A natural combination of love, peace, and harmony”

Snoop Dogg and Martha Stewart met for the first time in 2008. He was a guest on her cooking show, Martha Stewart Show. The two looked to have a great time together as they made mashed potatoes, and Martha laughed about Snoop’s particular way of speaking.

Martha Stewart pointed out that they made a “weird couple” when recalling their first meeting.

“Martha kind of, like, pioneered this,” Snoop Dogg added. “As far as letting rappers become a part of daytime television.”

It wasn’t only Martha and Snoop that felt that they had something special going. People loved seeing the two together, and just a year later, he returned to the show. Since then, the two have grown a strong fondness for each other, which Snoop Dogg once called “a natural combination of love, peace, and harmony.”

Appearing on Martha Stewart’s show was a great start to their friendship. Instantly, it was clear that the two were like a unit, something that people around Martha’s production also realized quickly.

The first couple of years after Snoop’s appearances on Stewart’s show, they didn’t hang out quite as much. But after they both appeared on Comedy Central’s roast of Justin Bieber, it was clear that Snoop Dogg thought she was a fantastic person.

“She sat next to me, and she stole the show,” the rapper recalled. “She was the funniest roaster that night. In that moment, I knew I wanted to be alongside this lady for the rest of my life.”

Created their own cooking show

In 2016, they decided to do a cooking show together, and in November, the first episode of their show Martha & Snoop’s Potluck Dinner Party aired. Forty episodes have aired throughout three seasons.

Both viewers and critics loved the show, with Martha and Snoop receiving an Emmy Nomination for Outstanding Host for a Reality or Reality-Competition Program in 2017.

“It’s not fake, it’s not put on,” SallyAnn Salsano, the producer of Martha & Snoop’s Potluck Dinner Party, said. “It’s just what it is. That’s why I think it feels so good because you have two people that genuinely love each other and respect each other, for real.”

Martha Stewart and Snoop Dogg are great friends. However, since the two have been seen together a lot, some have asked if any other feelings spark.

“He is very attractive”

Well, that is certainly not the case, according to Martha. Speaking on Good Day New York, the 80-year-old denied any romance between them.

“Snoop is younger than my daughter,” Stewart told Good Day New York. “We have to have a professional relationship, don’t we Snoop?”

She added, “He is very attractive, I must say, he really is an attractive human being. Everybody likes him. It’s so nice that he’s popular, and the guests really adore him and respond to him nicely. And he has a great sense of humor.”

Once we grow older, some might think that we are done learning. But in real life, learning new things never stops, and that’s also true for Martha Stewart. She and Snoop Dogg come from different backgrounds and generations, one of the things being the language.

Stewart previously revealed that she’s learned plenty of new words from Snoop, including “ball til ya fall” and “all hood.” Martha might have learned some new words, but unsurprisingly she’s also a great teacher and has told Snoop that she loves the food he creates on their cooking show several times.

Speaking with CBS, Snoop Dogg pointed out that her cooking colleague has made him more confident in the kitchen and taught him many things.

“Martha, you taught me preparation — the way you prepare a meal before you cook it and then, once it’s done, how you prepare the table,” the rapper explained.

“She teaches me how to be a better chef, better prepared … you know, preparation is key ’cause I love to cook with love!”

In October 2018, Snoop Dogg released his first cookbook, From Crook to Cook: Platinum Recipes from Tha Boss Dogg’s Kitchen. Most likely, that project would never have seen the light of day without his great friend, Martha Stewart, so it wasn’t a big surprise that Martha was the person who wrote the foreword.

“Snoop and I have a special bond that dates back to when he first appeared on the Martha Stewart Show in 2008. Our relationship was born from our connection to food as we whipped up some cognac mashed potatoes and green brownies,” Martha Stewart wrote.

“Working with Snoop in the kitchen has been a remarkable experience for me. Not only has he taught me new lingo and cultural references, he surprised me with his unique cooking techniques and recipes.”

Martha Stewart and Snoop Dogg have a unique relationship, but it’s truly one that we want to cherish, and hopefully, we’ll get to see them in more projects together soon.