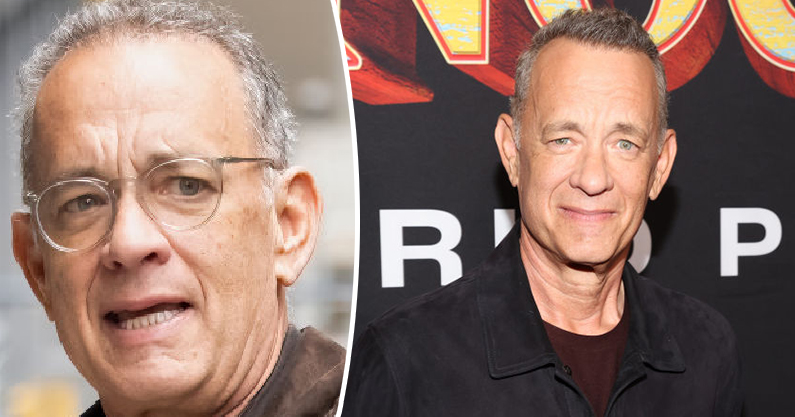 When it comes to celebrities who have stood the test of time and remained at the top of Hollywood without blemish, they rarely come more squeaky-clean than Tom Hanks.

Hollywood’s favorite “Mr Nice Guy” is an actor that nobody has a bad word to say about. On-screen he is a legend. Off-screen, he seems to be the nicest guy in Hollywood — a true gentleman.

But did you know that Tom has been suffering from a “silent” disease for many years?

It’s sometimes hard to believe it, but Forrest Gump star Tom Hank is only 66 years old – to me, it feels like he’s been around forever.

Over the years, the two-time Academy Award-winning actor has made a reputation for himself not only as a terrific actor but also as an all-around good guy, one who’s never let fame and fortune get to his head. As well as a cultural icon, Hanks is known as “America’s Dad” and is frequently seen performing acts of kindness toward his fans and those he meets away from the glitz and glamor of Hollywood.

If we dig a little deeper into Tom Hanks’ childhood and upbringing, it becomes clear why he has kept both feet on the ground, despite his successful career and all the millions in his bank account.

Born in Concord, California, Tom Hanks didn’t precisely have an idyllic childhood. He was the product of divorce and was forced to move a lot during his younger years – Tom himself described his childhood as nomadic.

As per reports, no one told him how to brush his teeth and Tom was often overlooked.

“Maybe there was a degree of loneliness because really no one — I kind of like fell through the cracks and didn’t really have adults per se that were taking care of me,” Tom told Graham Bensinger in an interview.

By the time Tom turned 10, he had lived in 10 different houses. Both his parents remarried “three or four times” and had several partners, so Tom was surrounded by stepbrothers and sisters who came and went. He has said that if he saw some of them today, he wouldn’t recognize them.

“When our parents divorced, we three older kids went with our mother, our younger brother went with our dad. Later we were herded back and forth. I can remember times of living together – all four of us in one bedroom at one point: in a big, spread-out house at another. Other times, we didn’t see each other for years,” Tom told Chicago Tribune in 1984.

Humor became the key that helped Tom get through his chaotic upbringing. He used it every time he attended a new school to get acceptance.

“I was a geek, a spaz. I was horribly, painfully, terribly shy. At the same time, I was the guy who’d yell out funny captions during filmstrips. But I didn’t get into trouble. I was always a real good kid and pretty responsible,” Tom told Rolling Stone.

“Up until then I’d had no clue that acting was ever an option,” he said. [I] had more fun than I could possibly imagine,” he said.

After studying at the California State University in Sacramento, Tom jumped on another project, spending three years with the Great Lakes Shakespeare Festival. The young actor learned all there is to know about classical theater, but then felt he was ready for another change.

Tom moved to New York in 1979 and landed his first movie role in He Knows You’re Alone, a low-budget “hack and slash” movie shot entirely on Staten Island. The film received mostly negative reviews, but was a commercial success and opened up many doors for the 24-year-old Tom.

Tom caught the eye of Hollywood and film critics when he had a role in the 1980 sitcom Bossom Buddies– but many would say that his big break came with the film Splash, a fantasy romantic comedy directed by Ron Howard.

He went on to star in Turner and Hooch and Sleepless in Seattle, before winning back-to-back Oscars and Golden Globes for his lead roles in Philadelphia and Forrest Gump in 1994 and 1995.

Family at a young age

During his early acting days, Tom was married to the American actress Samantha Lewes. Tom Hanks was just 21 when he tied the knot with Samantha and it didn’t take long for them to grow their family.

In 1978 they welcomed a son, actor Colin Hanks, and in 1982 Samantha gave birth to their daughter, Elizabeth.

Tom and Samantha were deeply in love at first and had a lot in common –Samantha also had experience with divorce. According to Tom, his wife “had stories that can even beat mine about having parents with a lot of marriages and divorce and all that.

”Both of us are extremely pragmatic. We  know our marriage could blow at any time – indeed it almost has,” he told Chicago Tribune in 1984.

After nine years of marriage, Tom and Samantha went their separate ways. Considering the spouses’ troubled childhoods, filing for divorce was a hard blow. Tom went through a very dark period and had therapy three times, weekly, to get over his destructive thoughts. In retrospect, he has called his divorce “a horribly painful time fraught with emotion and bad feelings.”

Tom felt he had failed as a father, but things started to change when he met actress and singer Rita Wilson, who would become his new wife.

At first, he was concerned about getting serious with another woman so soon after his divorce. In an interview with the “Sooo Many White Guys” podcast, Hanks revealed just how he felt about Rita the first time he met her.

One of the toughest times in their relationship was when Wilson was diagnosed with breast cancer in 2015. Thankfully, the doctors discovered it at an early stage and she was able to undergo treatment. Of course, Tom Hanks was there for her every step of the way.

Sadly, it wasn’t the first time a member of Tom’s family had cancer. His ex-wife Samantha died at just 50 years old, after her own battle with bone cancer.

Fortunately, Tom has not had cancer himself, but he suffers from another condition that has affected him for many years.

And it’s not easy to spot it – because it’s not a very visible disease.

The “silent” illness has limited Tom’s career and forced him to turn down specific roles that required substantial physical changes or the consumption of certain foods. The Hollywood star first experienced symptoms of the disease back in the early 90s – but didn’t know what it was then.

After examinations and tests, the doctors finally gave Tom an answer. And in 2013, Tom went out in public and revealed that he had been diagnosed with type 2 diabetes.

Speaking on the Late Show with David Letterman, the 66-year-old actor told the famous TV host that he suffered from diabetes mellitus, a disorder in which the body does not produce enough or normally respond to insulin, causing blood sugar levels to skyrocket. Diabetes 2 is a common disease that can lead to devastating and life-threatening consequences if you fail to adjust your life and habits accordingly.

Over 37 million Americans have diabetes (about 1 in 10) and approximately 90-95% of them suffer from type 2 diabetes. But according to Tom, he got startled when he was diagnosed.

Some reports describe diabetes as a silent killer because many people with type 2 diabetes often have no symptoms at first.

”I went to the doctor, and he said, ‘You know those high blood sugar numbers you’ve been dealing with since you were 36? Well, you’ve graduated! You’ve got type 2 diabetes, young man,’” Hanks recalled.

Tom was actually warned by his doctors earlier in his life; they let him know he had pre-diabetes. Still, he ignored the red flag and went about his life as usual. When the final verdict came, Tom felt like a total idiot.

”I thought I could avoid it by removing the buns from my cheeseburgers,” he told Radio Times.

”Well, it takes a little bit more than that.”

According to the Toy Star actor, his family history of diabetes and his lifestyle are the main reasons behind his condition. His genes, in combination with eating anything he wanted, weren’t exactly ideal.

“I’m part of the lazy American generation that has blindly kept dancing through the party and now finds ourselves with a malady,” Tom said.

“I was heavy. You’ve seen me in movies, you know what I looked like. I was a total idiot.”

To put the disease in remission, doctors advised the much-loved actor to slim down and keep the same weight he had as a teenager. Physicians were optimistic, but Tom wasn’t so sure.

“I’m going to have type 2 diabetes then, because there is no way I can weigh [what I weighed] in high school,” he said, laughing.

But a lot has happened since that interview with David Letterman in 2013. Looking at recent pictures of Hanks, it’s evident that he has had a change of heart. In May 2022, Tom appeared on the red carpet in Cannes to promote his new Elvis movie.

Many of his fans noticed how good he looked, and that Tom was more slender than ever. If you ask me, he has definitely dropped some pounds!

The 66-year-old seems to work hard to maintain a healthy weight – he also exercises to help control his blood sugar levels.

”I try to get, every single day, one hour of activity. That can be anything from a treadmill or a walk or a hike with a dog, but it has to be one hour every single day,” he told the podcast ‘Sooo Many White Guys’.

If left untreated, type 2 diabetes can cause severe health problems such as heart disease, kidney disease, and stroke. So we hope that Tom Hanks can make the necessary lifestyle changes that are needed.

Please share this article to celebrate a true Hollywood legend that has stayed humble despite his huge success.