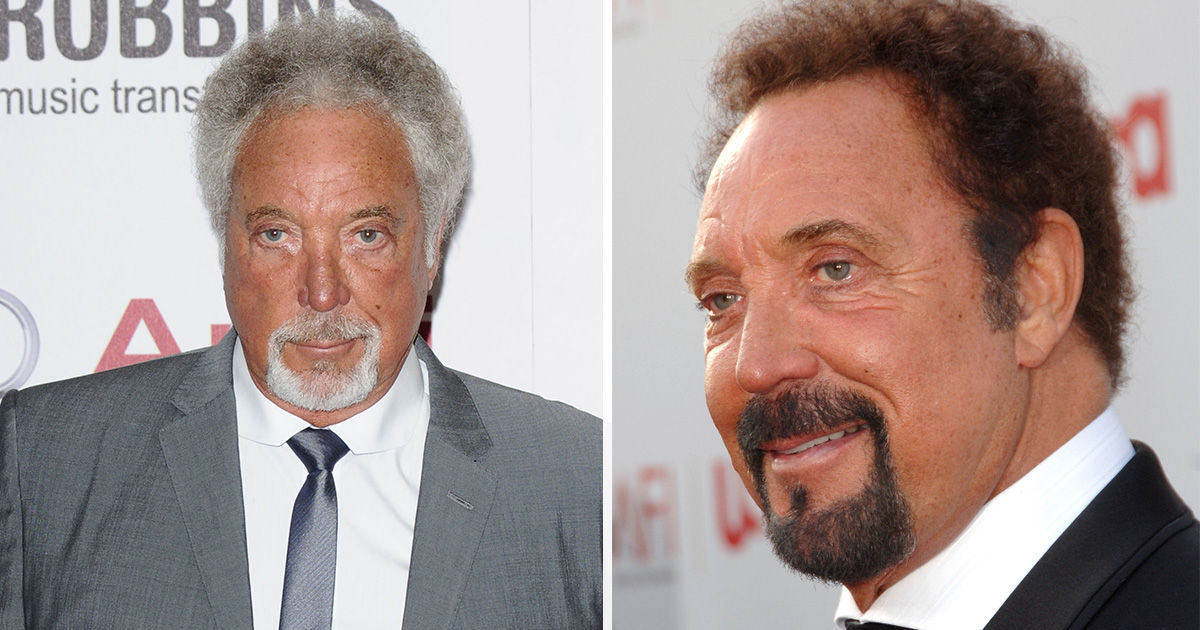 Tom Jones has done it all. The legendary musician has received countless recognitions and awards for his contribution to music – and has even been knighted along the way.

Five years ago, Jones experienced great tragedy when his wife since 1957, Linda Trenchard, passed away. Now, he’s doing his best to try and move on in life – and is aiming to stay as healthy as an 80-year-old can.

Recently, Tom Jones revealed his rather unusual way of staying in shape. For him, of course, It’s Not Unusual.

Tom Jones’ career as an entertainer started at a very early age. Born Thomas John Woodward on June 7, 1940, Jones grew up in the town of Pontypridd, Wales.

From an early age, he loved to sing, and regularly performed during family gatherings and in the school choir, as well as at weddings and his mother Freda’s Women’s Guild meetings.

At the same time, Tom had also been diagnosed with dyslexia, a condition which he struggled with in school. He loved listening to the radio, especially American blues, R&B and rock.

At 12 years of age, he suffered a tough blow as he was diagnosed with tuberculosis. It forced him to stay quarantined at home.

“I was isolated for two years. In the house, I couldn’t go out,” he told the BBC. “For the first year, I couldn’t get out of bed. The toilet was in the garden!

“We had this three-story house, I was on the middle floor in the back room, ’cause that’s was where I could be isolated.”

Fortunately, Tom made it through, and it wasn’t long before he took his next step in life. At 16, he left school, and soon after he became a young father.

Around that same time, he became more and more interested in the new rock ‘n’ roll sounds on the radio. He’d also become interested in romance, and fell in love with a girl called Linda.

Speaking to Radio 2, Tom Jones described the moment he first saw her.

“I remember her playing marbles and I thought, ‘My God, what great legs she’s got’. She was the best-looking girl around there and we got together. It was magic,” he said.

When he was 17-years of age, Tom Jones married Linda. Just one month later, they welcomed their son Mark.

Tom Jones was working night shifts at a paper mill, which brought the young family an income. At the same time, he really loved music, singing especially. In 1963, at age 23, he became the frontman for the local band Tommy Scott and the Senators.

At the time, Tom played both the guitar and drums. But it didn’t take long before he realized his passion and strength lay in his wonderful voice.

“If I met the 16-year-old Tom Woodward, I’d like him very much. Because my values haven’t changed. Even my taste in music hasn’t changed,” Jones told The Big Issue.

“Great Balls of Fire excites me as much now as ever. Rock Around the Clock – that influence fed me so much, got my blood pumping. Then I heard Elvis Presley and I thought, my God, I can sing like that! We have exactly the same range.”

Tom Jones eventually left the band to start his own solo-career. First, though, his new agent, Gordon Mills of London, wanted him to go through with a big change. Thomas Woodward wasn’t the most fancy stage name for an artist – and he believed Tom needed to change it.

Mills suggested “Tom Jones”, since it sounded “very Welsh and laddish”, according to The Guardian.

Tom started to record demos, only to grow tired of the process just six months in. It was at that point that Mills brought Tom a song that he had written himself. A song called It’s Not Unusual.

At first, Mills said it was to be recorded by a young singer named Sandie Shaw.

Tom Jones made a demo of the song, however, and even though his manager said that Sandie was supposed to sing it, he knew he could make it work.

“Thank God Sandie Shaw listened to the demo and said, ”Whoever’s singing this song, it’s his song’, so God bless her,” he said.

It’s Not Unusual became a smash-hit, and Tom Jones aimed his sights at the US. The song also became a top 10-hit in the US, and after his great success with the song, Tom appeared on the legendary Ed Sullivan Show.

More songs followed, and Tom Jones reached superstar status. In the latter half of the 1960s, he was right at the top following songs such as Once Upon a Time, Green, Green Grass of Home, I’m Coming Home, Delilah, and Help Yourself.

In, 1967, Tom performed for the first time in Las Vegas, at the legendary hotel The Flamingo. His time in Vegas transformed him into a superstar in the US as well. Later on, he’d enjoy a friendship with another Vegas regular, Elvis Presley.

The two had met for the first time in 1965, and it sure was a special meeting. Tom Jones wasn’t quite a star at that time, but Elvis recognized him anyway.

He was working at the Paramount Studios in Los Angeles, and Jones heard that Elvis would be there the next day. Not only that, but the Hound Dog superstar wanted to meet him.

Tom Jones showed up the next day – and Elvis recognized him.

“So he gets out of this helicopter and starts walking towards me. I had a record out at the time, my third single called With These Hands and Elvis is suddenly walking towards me and he’s singing ‘With these hands, I will cling to you,'” Tom Jones recalled on The Graham Norton Show.

“And I thought ‘My God! If the boys back home could see me now!’ Elvis said to me, ‘How the hell do you sing like that?'”

Tom Jones then got his own television show in the 1970s. Even though he’s now 80 at the time of writing, his career hasn’t slowed down one bit. With songs like She’s a Lady, and tens of tens other hits besides, he’s ensured that he’s never left the spotlight.

He has prevailed as one of the true music legends, winning Brit Awards, Grammy Awards and countless other recognitions for his outstanding contributions to music. And in 2016, Jones was knighted by Queen Elizabeth for his services to music.

As you know by now, Tom became a father in his teenage years. He married his wife Linda Trenchard in 1957, and they stayed together. Sadly, Sir Tom was forced to say goodbye to his beloved life partner in 2016, when Linda tragically passed away after a “short but fierce” battle with lung cancer.

After Linda’s death, Tom cancelled all his concerts and released a short statement:

“Surrounded by her husband and loved ones, she passed away peacefully,” the Sir Tom’s website wrote.

But last year, Sir Tom opened up on her tragic death. In an interview with This Morning, the Welshman said he would “never love again”.

His wife’s passing really crushed him, and he struggled to perform on stage long after Linda was gone.

“When my wife passed away, I didn’t think I could sing,” Sir Tom explained. “When you’re emotional, you can’t sing, your voice closes up.

“There are certain songs I wouldn’t do. But you have to try and get things in the right perspective. Feeling emotional; use it to your advantage and put it into the song.

“It took me a while,” he continued. “Took me a few months to try and see if I could sing. I got some of my musicians around and tried a few songs. But it was very emotional.”

Linda’s passing also had other consequences – Jones decided to sell their big mansion in Los Angeles, along with all their furniture, in order to move back to the UK.

Today he lives in a flat in London – that was Linda’s wish. His late wife had been homesick and wanted to move back to her roots, but cancer took her life before it was possible.

“She always said she wanted to come back and then she could not do it, so then she told me to do it in the last week she was alive,” said Sir Tom, who was married to Linda for 59 years.

In 2004, his wife stopped accompanying her husband on his tours and remained mostly at home in the couple’s Bel Air mansion.

A year before her death, Tom opened up about his relationship with his wife in his 2015 autobiography Over the Top and Back. In it, he spoke lovingly about his wife, calling her “the one”.

As time passed, he started to accept that Linda was no longer around, saying that “time is a healer.” In the book, Tom wrote that he was more realistic now, and at the same time he didn’t think he’d ever be as much in love again.

“I have never had that feeling for anyone else. I don’t think you can fall in love more than once.” When asked outright whether he would date again in 2019, Sir Tom said: “No, I don’t think so.”

Tom has struggled with back problems for a number of years. At 80 years of age, however, the legendary singer is very much staying in shape and is looking absolutely fantastic!

Now, Jones has revealed that he has a very special way of staying healthy, a way that many people would probably find rather bizarre.

Speaking to the Mirror, Jones explained that he uses a technique called “inversion therapy”. It sees him dangling upside down, a practice which is said to help blood circulation. The shifting of the body’s gravitation is said to ease pressure on back and spine.

People who suffers from scoliosis, chronic lower back pain and poor circulation are said to benefit from this specific type of therapy, according to The Sun.

Not only that, but Jones has decided to cut down on the alcohol, and only drinks a glass of wine of beer occasionally. According to the man himself, it sure is starting to show.

“I’ve got a 12-pack,” he said. “But health is very important and that’s a lot of luck. You’ve got to take care of yourself.”

Tom Jones has – just like millions of people around the world – been in quarantine during the COVID-19 pandemic. In January of 2021, he spoke on the Graham Norton Show, saying that he has gotten two doses of the new vaccine.

“I thought ‘I’ll be able to go out and do some live shows now’, but then I thought, ‘you’ve got to have an audience for that! If they haven’t had the jab, what’s the point?'” he said.

Tom Jones has lived a long life, full of love. He’s given us hundreds of amazing songs and we will always be grateful for that! We’re also so happy to hear that he’s doing good following his wife’s passing – as well as staying in shape.