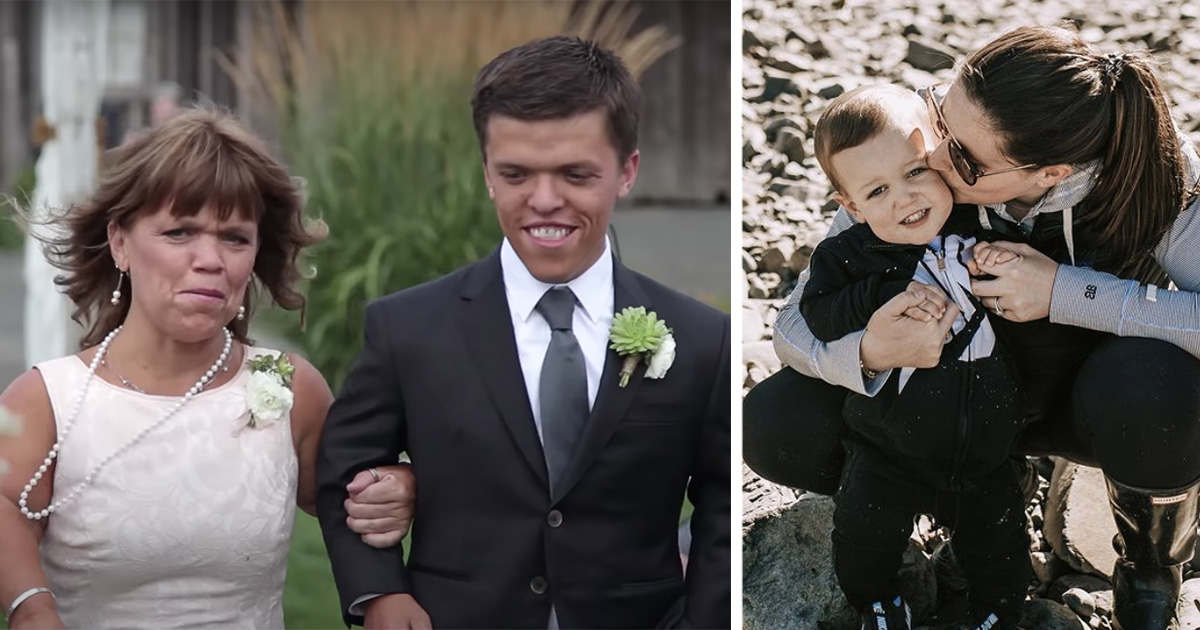 Even though we’ve come a very long way, there are many things in our society that are still very stigmatized.

One of those subjects in undoubtedly dwarfism, and to that end Zach and Tori Roloff have been breaking barriers for over a decade through their show Little People, Big World.

Fans have been able to follow their life, sharing exciting milestones together. And now, the couple have more wonderful family pictures to share with the world.

For over ten years, people all over the world have been able to follow Zach and Tori Roloff on the TLC Series Little People, Big World.

Not only do they have a wonderful life to share with the viewers, but they’re also breaking down stigmas around dwarfism, or achondroplasia, which is a genetic disorder thats primary feature is dwarfism.

Sufferers of the condition can find themselves at high risk of becoming victims, either being discriminated against or even socially excluded. But the truth is that just because you have achondroplasia doesn’t mean that your medical or physical accessibility problems are any different from a person who doesn’t have it.

All over the world, people are trying to break stigmas over many things. In the US, Zach and Tori Roloff, together with the rest of the Roloff family – are doing their best to show that one can have a wonderful and magical life, no matter how tall or small one might be.

Since 2006, fans have been following parents Matt and Amy and one of their children, Zach, in Little People, Big World. The reality television series has mostly taken place at the Roloff family farm in Portland, Oregon, but in 2010, it was announced that the sixth season would be the last.

That same year, however, Zach Roloff met the love of his life. And it happened on the farm.

This is the story of him, his wife Tori Roloff and their children. It sure is a wonderful love story. But it is also a tale of overcoming stigma and keeping faith in oneself.

Zach Roloff’s mother Amy experienced many instances of getting bullied as a child, just because she appeared to be a little different. Fortunately, Zach didn’t have to go through the same firestorm.

He experienced some teasing, sure, but it wasn’t really to any great extent. He believes the fact that he went to a private school instead of a public one probably helped.

“I’ve never dealt with anything like that,” he said in a TLC clip. “It wasn’t like I showed up to school every day and the same kid was there ready to go.”

What helped was that the Roloff family farm was a good place to go to get some rest from society.

Zach became famous to the world through the series Little People, Big World. But in Oregon, he’s been a familiar face a long time.

Aside from helping his parents at the farm, he’s also working as a youth soccer coach.

“My most rewarding experience has been seeing all the kids that come back every year at tryouts,” he told retailer Lock Laces in 2017.

“I love seeing the kids come back that I had the previous year, and it feels great that they want to come back and be a part of the same team and have me as a coach again.”

Zach’s also taken part in hosting soccer fundraisers to build more awareness for dwarf athletics. On top of that, he represented Team USA in the first Copa America Dwarf World Cup, in which his team won by way of defeating the UK in the 2013 finals.

For Zach, soccer isn’t just a game. It has given him so much more that has helped him in life.

“The game has shaped who I am in tons of ways,” he said. “Everything comes back to soccer. It taught me a lot about teamwork and sacrifice. A lot of my life philosophies can be traced back to soccer.”

In 2010, however, life changed forever for Zach. One day, a girl named Tori began working at the farm during pumpkin season, picking squash, and the two hit it off right away.

Zach had never really dated before he met Tori, but the first date was something special.

“A coworker told me, ‘Zachary really thinks you’re cute, but doesn’t think you’ll ever go out with him’,” Tori recalled in an interview with People Magazine. “Our first date lasted five hours, and we’ve been together ever since.”

In 2015, Zach and Tori Roloff got married at the family farm in Hillsboro, Oregon. Since then, they’ve come a very long way.

“It’s a big day,” Zach Roloff told People ahead of their wedding. “We’re marrying, coming together, committing ourselves to one another for a lifetime in front of all of our family and friends. We’re just super excited!”

When the couple were getting married, however, Zach’s parents Amy and Matthew were in the middle of a divorce.

When the big day arrived, they put it aside to celebrate the love of their lovely son and his wife. Amy Roloff actually made the rehearsal dinner meal for 45 people all by herself.

“My parents played a huge role in setting up the farm, making it all nice,” Roloff said.

“My mom’s going to have a tough time with all four of her kids marrying, if they all do,” he continued. “She bawled all the way through her and Jeremy’s mother-son dance and she and I are really close. She’ll bawl through ours, too.”

Today, Zach and Tori are still working on the Little People, Big World television series. According to Business Insider, he makes between $15,000 and $35,000 per season. Tori can be seen in the show as well, though in the beginning she was a bit intimidated about appearing in front of the camera.

“We’re such a unique pairing, and we have a really cool story to share, but it was terrifying,” she explained. “But the show has helped me realize I shouldn’t worry about what other people think.”

In 2017, two years after the couple tied the knot, Zach and Tori welcomed their son Jackson Kyle. Just like his father, he has achondroplasia, which is the most common form of dwarfism.

Tori – who worked as a teacher before Jackson was born – decided to take a gap year to be at home with her newborn son. She was clear on that she and her husband want to help stress that he can do whatever he wants, no matter what other people think.

“I just pray that he’s caring and thoughtful, like his father,” said Tori. “I just want him to be a good person.”

“Whatever he wants to do in life, we’re going to find a way to help him do it,” Zach added. “That’s our job in life now.”‘

Of course, while Zach and Tori Roloff didn’t care that their beloved son had achondroplasia, they’ve had to accept there are certain associated difficulties.

“My child is different”

This became clear when the family decided to visit a local festival, and Jackson wasn’t allowed on one of the rides because of the height requirement.

“It was harder for me than it was for him for sure,” Tori Roloff wrote on Instagram. “It was really the first time I was hit in the face with the fact my child is different. I’m so proud of my husband and his outlook on it all and even more proud of my son who brushes things off with ease and I pray they both continue to do this,”

Besides teaching, Tori’s also involved in photography. She’s created an Instagram page for her photography, and it’s clear she simply loves taking pictures of her beautiful family.

In November of 2019, she and her husband Zach had one more big reason to take photographs. The couple welcomed a baby girl named Lilah Ray Roloff. Lilah was also born with achondroplasia.

On the hit TLC show, fans got a closer look at their growing family.

Tori explained that she and Zach struggled to take in that both of their children would have the aforesaid genetic condition, which they found out very early in their daughter’s pregnancy.

Naturally, though, it hardly matters. To Zach and Tori Roloff, she is the most beautiful and loving girl in the world. And by looking at the pictures of little Lilah, we couldn’t agree more. She is so beautiful!

Tori explained her feelings in an emotional post shared on her Instagram page. She had recently found out that a friend of hers had issues with her pregnancy.

“That day she found out that she may never get to meet her baby. I remember being so absolutely heartbroken for her and her family,” Tori Roloff wrote. “So when I went to our doctor appointment and found out Lilah has dwarfism I remember feeling guilty for being worried. Because at least my daughter was healthy. At least I would get to hold her. I would get to meet her.”

Many of her followers commented on the post, which included a lovely picture of Lilah, offering Tori their support.

Zach and Tori have learned a lot about the changes that come with raising two children. Having a girl with dwarfism is “new territory”, says Tori, but we’re happy to hear that Lilah is described as “one tough girlsie”.

In this day and age, dwarfism shouldn’t be a big thing. Both Lilah and Jackson are just like any other children, playing together and going on adventures to discover the world.

“Another thing we’ve learned is you can’t necessarily take what you did with your first kid and apply it to your second kid because every child is different,” Tori says.

“And that’s always been the case with them. We’re figuring out that they’re two completely separate kids, and we have to adjust our parenting accordingly.”

Christmas is around the corner and since Lilah was only a few weeks old last time around, this will be her first winter-wonderland holiday season.

On Instagram, Tori now shares wonderful news about her lovely family, along with some cute pictures of children Jackson and Lilah.

Jackson has now grown and is a big boy – he even goes to slumber parties! We’re are so glad that they are doing great despite the COVID-19 pandemic.

“Jackson is off on a slumber party tonight and Zach and I got some extra one on one time with this sweet bean,” Tori writes. “It’s such a gift to be able to spend alone time with both kids. Tonight we were just reflecting on how quiet our house is with only one kiddo!! We can’t wait to have our little man home again but this has been fun!

We are so happy to see these new pictures of Tori and Zach Roloff’s beautiful children Lilah and Jackson. They truly are a wonderful family, and we wish them all the best in the future.

Please, share this story with friends and family to show your support for the Roloff family!