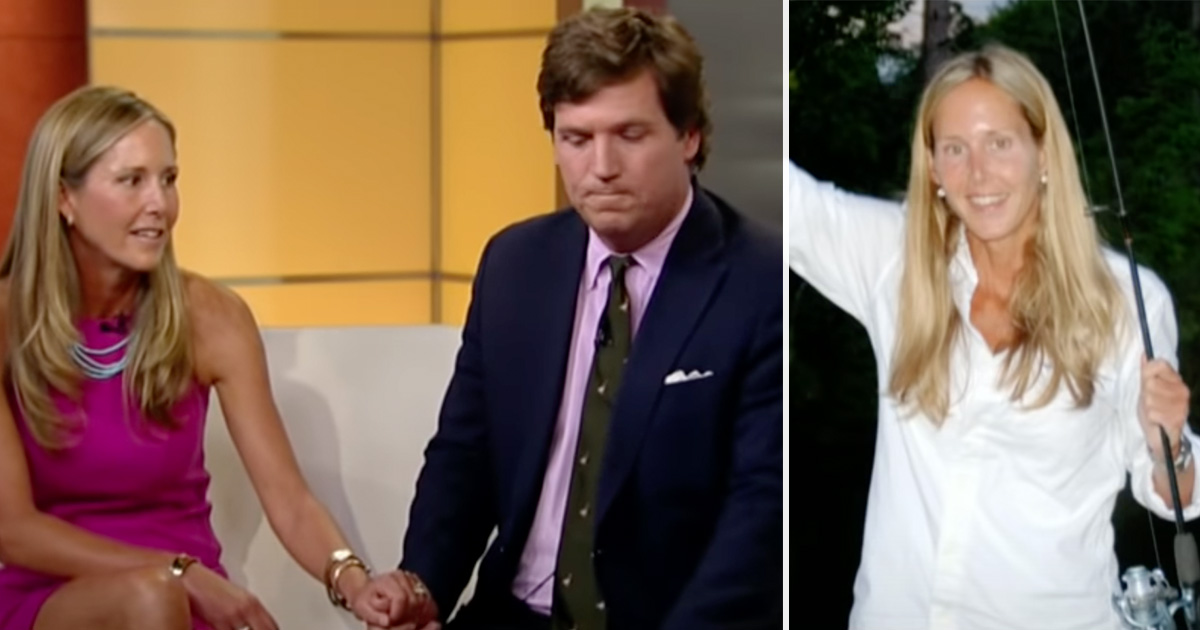 For those who watch primetime television, you might be familiar with Fox’s political commentator Tucker Carlson. The TV host has had a long career in television, having left CNN for Fox years ago. These days, he’s one of the most famous people in broadcasting.

Even though many people recognize Carlson from television, little is known about his private life. The truth is that he has a big family, and he met his wife when he was only 15 years of age.

Here’s all you need to know about Tucker Carlson!

Tucker Carlson has aways been good at making headlines, never more so than during presidential elections.

The Fox News host has his own big show on the television network, but the fact is that he has been in the game for a very long time.

In fact, Carlson has worked in several broadcasting roles, including for CNN. In addition, he’s also written for several news outlets, but many probably don’t know where his professional journey started.

Not much is known about Tucker’s private life. But he’s very much in love with his wife, with whom he has four children.

So who is Tucker Carlson, really?

Tucker Carlson was destined to head into the field of journalism from the very start. However, his childhood was packed with many tragic events.

Born May 16, 1969, as the older of two boys, Carlson grew up in San Francisco, California. His family was wealthy, as his father – Richard Warner Carlson – had had a successful career in journalism as a reporter and television anchor, and later in politics. His mother, Lisa McNear, was an artist.

Living in the neighborhood of La Jolla, Carlson grew very close to his father. In fact, he didn’t really have anyone else.

When he was only 6 years of age, his mother left the family to settle in France, where she wanted to live a bohemian lifestyle. Carlson and his brother never saw her again.

“Totally bizarre situation—which I never talk about, because it was actually not really part of my life at all,” he told The New Yorker.

Tucker Carlson grew up without his mother, and the disappointment of her leaving stuck with him. Even so, he never felt an urge to track her down.

“I would just sum it up by saying she was a woman who left her two children for a foreign country and never came back,” he explained.

“Probably there were some other things going on. It’s not typical. I mean, most mothers, no matter how incompetent or drunk, don’t leave their children. They’re just hard-wired not to. There are exceptions, obviously—I grew up with one—but it’s unusual behavior.”

At the time, Carlson had no idea where his mom was leaving for. He described his childhood as “pretty fun”, and he loved his dad a lot.

He felt it was sad that he lost his mother, though he described her as a “nutcase”. At the age of 10, his father remarried the woman who would become his step mother, and he loved her.

Even though he didn’t feel anything for his biological mother, he didn’t know what he would do if she was to reappear. And she did, when Carlson’s aunt called him, saying she’d tracked her down to a remote part of France, where she was working as a sculptor.

By that time, his mother was suffering with lung cancer, but Tucker’s mind was made up. Even though she was very ill, he had no plans to visit her.

“I felt sorry for her”

Carlson explained in an interview with Playboy that he didn’t have anything to say to her.

“After that phone call, I went home and had dinner and went to bed and slept fine,” he recalled.

“It didn’t really have a big effect on me. I guess it had been so long, and time goes by, I don’t think I’m shallow. I care what people think, or at least the people I love. But I was over it, I guess.”

“I said to my wife, “Remember how I used to say I was going to fall apart, that it would all come rushing back? It didn’t. I felt sorry for her. I wasn’t mad at her anymore. It was just kind of sad, this woman dying alone in a foreign country.”

Carlson’s father married Patricia Swanson in 1979. At the time, Richard was working in banking, but the family soon moved to Washington.

Tucker was sent to boarding school at the age of 14, where one classmate described him as “a bey boy teleported in from nineteen-fifties California.”

At this point, Carlson was already showing his great strength in debating and letting his opinion of things be known. He told his liberal teachers how they were wrong on certain subjects. Around the same time, he also began dating Susan Andrews.

She was the daughter of the Reverend George Andrews, the headmaster, and his relationship with Susan would go on to become something much bigger.

“She was the cutest 10th grader in America,” he told People.

“There was a bounce in his walk. He was in his khaki pants and ribbon belt and I thought, even then, he seemed so optimistic and positive,” Susan remembered.

The love between the two was real indeed, as they got married when he was still a college senior. Six months before his graduation, Carlson worked up courage and asked for Susan’s hand in marriage.

“All very 19th Century, but a good thing to do,” Carlson said.

Susan’s father George spotted Tucker’s inane talent for debating. Soon, Tucker was spending more time debating than he was studying, and fell out of contention with regards attending any of the more prestigious universities.

However, Susan’s father managed to arrange for Tucker to attend Trinity College in Hartford, Connecticut. There, he crafted his skills until he was ready to take them to the next level.

Tucker wasn’t the best student. He did, though, and wanted to pursue a career in the CIA. He tried out, but unfortunately failed, and instead, he got a job in Little Rock, working for the editor of Arkansas newspaper Democrat Gazette.

It was at this time Carlson started his journalism career, writing several articles about crime.

He also drafted a book called People vs. Crime: How Citizens Can Restore Order to America’s Streets. However, the book deal was cancelled as Carlson realized that he wasn’t sure how to actually restore, what he called, “order to America’s streets”.

In 1995, Carlson was hired to write for Weekly Standard, a newly-founded paper inside of the Rupert Murdoch corporation. He got the job after working as a fact-checker for Policy Review.

Carlson wrote several pieces, and was even nominated for a National Magazine Award. He started to enjoy more freedom in his journalistic work, and travelled to Pakistan shortly after 9/11. It was a nightmare, where he almost lost his life in a plane crash, according to CJR.

Years later, he was told that the plane almost crashed because of an explosive device in the cargo hold. However, this has never been confirmed.

A year after the accident, Carlson decided to quit drinking. Instead, he wanted to pour all his energy and focus on his family. The crash taught him an important lesson: that he couldn’t control everything.

“But I can’t control anything else. The second you realize that, the anxiety falls away. I could get hit by a car walking out of this restaurant. I’m not saying that in a sad way; I’m saying that in a happy way.

“It takes a lot off the table. All of a sudden, I didn’t care about a lot of things I used to care about. I’ve been in a pretty good mood since.”

Shortly afterwards, Tucker stumbled into television, and it was quite a coincidence that he even got into that arena in the first place. In his book, Politics, Partisans, and Parasites: My Adventures in Cable News, Carlson explained how it all started.

“I was heading back to my desk with a take-out hot dog one afternoon when I ran into the receptionist. She asked me what I knew about the O.J. trial. My instinct was to answer honestly (“just about nothing”), but for some reason I caught myself. I asked her why she wanted to know. Well, she explained, Dan Rather’s booker just called looking for an O.J. expert to go on 48 Hours tonight. Everyone else is still at lunch. Can you do it?“

So, Carlson appeared on television, and following that he became a regular. In 2000, he joined CNN, and later got his own shows, The Spin Room and Crossfire.

He became known for his special style of interviewing, as much as for his trademark staple bow tie.

“I like wearing bow ties,” he told The New Yorker. “And I certainly spend a lot of time defending them.”

Tucker wasn’t a big television star at this point. However, in 2004, he gained fame for a whole different reason that he probably had thought.

The then-Daily Show host Jon Stewart called him a “dick” and added that his program “was hurting America,” in what became an incident that changed everything.

Carlson however, claimed in a later statement that he had resigned before the announcement.

“I resigned from “Crossfire” in April 2004, many months before Jon Stewart came on our show, because I didn’t like the partisanship, and I thought in some ways it was kind of a pointless conversation…each side coming out, you know, ‘Here’s my argument,’ and no one listening to anyone else. CNN was a frustrating place to work,” Carlson wrote.

At the age of 40, Carlson was unemployed again after MSNBC canceled his show due to low ratings. He started his own conservative website called The Daily Caller, and sold his ownership stake to co-founder Neil Patel in 2020, according to the Wall Street Journal.

Since 2009, Tucker Carlson has worked on Fox News as a contributor, and appeared on shows like Fox and Friends. In addition, he was also a substitute host for Hannity.

We have already mentioned Tucker Carlson’s wife, Susan Andrews, with whom he shares four children. The couple married in 1991, which means they’ve now been together for over 30 years!

Even though they’ve been a pair for several decades, Carlson and Andrews have been through some really tough times.

In the early 2000s, Carlson’s promising career in media was very much threatened when he was falsely accused of rape at a Kentucky hamburger restaurant, according to the Daily Mail.

However, it was later determined that Carlson was never there. The alleged accuser publicly admitted that she was “delusional” and suffered from schizoaffective disorder.

In 2018, the Carlson-Andrews family endured another horrible event, when protestors tried to break into their Washington home. At the time, Andrews was the only one home, and she locked herself in the pantry and called 911.

Break in at their house

Speaking with the Washington Post, Tucker Carlson explained what happened.

Carlson continued saying it was a “treat”, as they weren’t protesting against anything specific that he himself had said.

“They weren’t asking me to change anything, they weren’t protesting a policy or advocating for legislation,” Tucker Carlson said. “They were threatening me and my family and telling me to leave my own neighborhood in the city that I grew up in.”

Tucker Carlson has had himself quite a career – as well as raising four children and having a long-time marriage with his wife.

What do you think of Tucker Carlson? Do you enjoy watching his show or not? Please, give us your opinion in the comments section on Facebook.