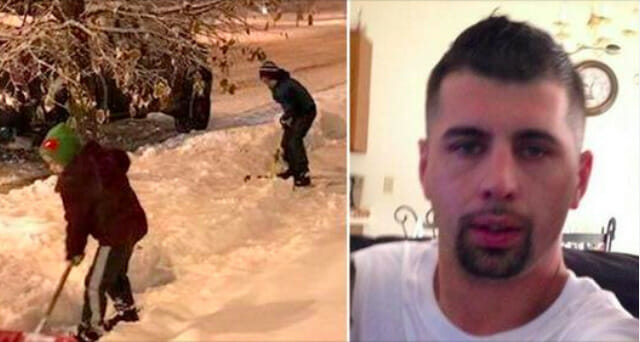 Christmas is that time of year that tends to be accompanied by a surplus of warmth, compassion and community offerings.

When father Daniel Medina from Milwaukee, Wisconsin, caught sight of something odd one cold, winter evening, he felt compelled to share the incident on Facebook — and his story has since gone viral.

Daniel Medina and his two sons, aged 6 and 10, were on the road in their neighborhood one day when his boys suddenly asked him to stop the car.

At first, Daniel was confused. It was very snowy out and ice-cold, what could they possibly want?

Then Daniel caught sight of the man on the sidewalk.

It was clear that the boys had spotted him, too. The man was wheelchair-bound… yet shovelling snow away.

Anyone who has ever shovelled snow knows just how difficult, tedious and exhausting it can be. Now imagine doing it from a wheelchair. The man certainly appeared to be struggling as he tried to shovel away heavy heaps of snow.

Daniel’s boys, just 6 and 10, had the immediate instinct to help — entirely of their own initiative. The dad obliged — and soon they’d all grabbed shovels and were helping the wheelchair-bound man.

Daniel couldn’t have been prouder. Despite their fatigue and freezing cold temperatures, they insisted to help the stranger that was struggling on the street.

They knew how much faster and how much easier it would be if they gave him an extra hand, and so they did… until the job was done!

It’s not everyone who has the reflex to help people in need, yet these young boys didn’t hesitate to offer a helping hand.

Daniel later described the incident on Facebook, and his post received tens of thousands of reactions and tributes to the young boys.

Many people have a picture that today’s youth are spoiled and self-centered brats, and perhaps that’s just why this image has spread like wildfire online.

This story certainly reignited my hope in humanity — share to also pay tribute to these young boys’ wonderful act of compassion!