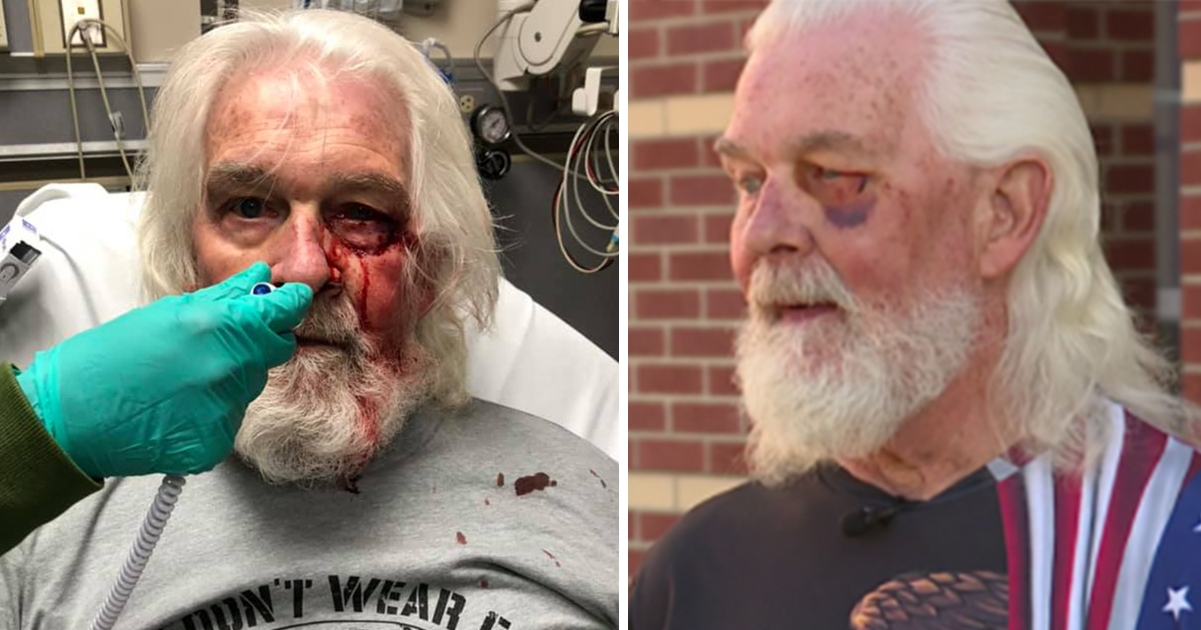 A 72-year-old veteran fought back after being punched in the face after two teenagers attacked him and stole his car.

Just days before Veteran’s Day, Vietnam veteran Peter Hoban was attacked while on his way to the Cleveland VA medical center at around 1 p.m. Sunday afternoon.

Hoban noticed youths hanging around the parking garage and feared the worst.

“I made a mental note to myself when I get down there, I’ll tell them (center staff) they have people hanging out in the garage that are probably up to no good,” Hoban said, as per News5 Cleveland.

The 72-year-old’s instincts were right as he was approached by two of the teenagers as he walked toward the medical center.

“Probably took about four or five steps and I heard his feet hit the concrete and I thought something is coming down,” Hoban explained.

He said the teenager asked him for money. He said no and kept walking. The teenager blocked his path. That’s when Hoban said he shoved the teen, and then another teenager hit him in the eye.

“They were both together so I charged them, tackled them down and started yelling for police and help,” Hoban said.

One of the teenagers grabbed the veteran’s car keys and ran off but he continued to fight with the other.

Two strangers and fellow veterans spotted Hoban and rushed to his aide. Between them they managed to hold the teen down until police arrived.

“He was twisting his arm, I was holding his legs, a third gentleman came up and about that time I saw my car drive by down the ramp,” said Hoban.

One of the veterans told Hoban, “You mess with a veteran, we stick together,” as per News5 Cleveland.

‘I’m grateful my daddy is safe’

“A Cobra Pilot Vietnam veteran is someone you do NOT MESS WITH. Dad is ok. They checked him out and did scans at the VA. He is fine on the inside. Just bumps, bruises and scrapes on the outside,” she wrote, alongside pictures of her bruised dad.

“This gets me soooo MAD and breaks my heart at the same time. Why…why pick on somebody that could be your Grandpa?! Why?! I am grateful my Daddy is safe and ok over all.”

She added that her father’s car was found two blocks away from the scene.

Meanwhile, Hoban is on a mission to find the veterans who helped him; so far, he’s found one.

“I want to buy them a drink, coffee, dinner or whatever,” said Hoban.

Cleveland VA said its VA police arrested one of the suspects and reassured visitors that this was an isolated incident.

‘The car will be returned to him’

“Our VA Police conduct regular patrols throughout our property, but there is still an element of risk even in the safest of areas. This was an isolated incident, and our risk assessment does not call for additional security at this time.

“We continue to encourage Veterans, employees and visitors to report suspicious activity immediately. If faced with a similar situation, experts recommend maintaining your calm, giving the offenders the property, and immediately notifying authorities. We are thankful there were no serious injuries in this instance and that the Veteran’s car will be returned to him.”

The lengths people stoop to steal from others continues to astound me. It takes a real coward to attack an elderly man for his car, let alone two on him.

I hope they catch the second teen responsible for this shameful act and justice is properly served. Please share.