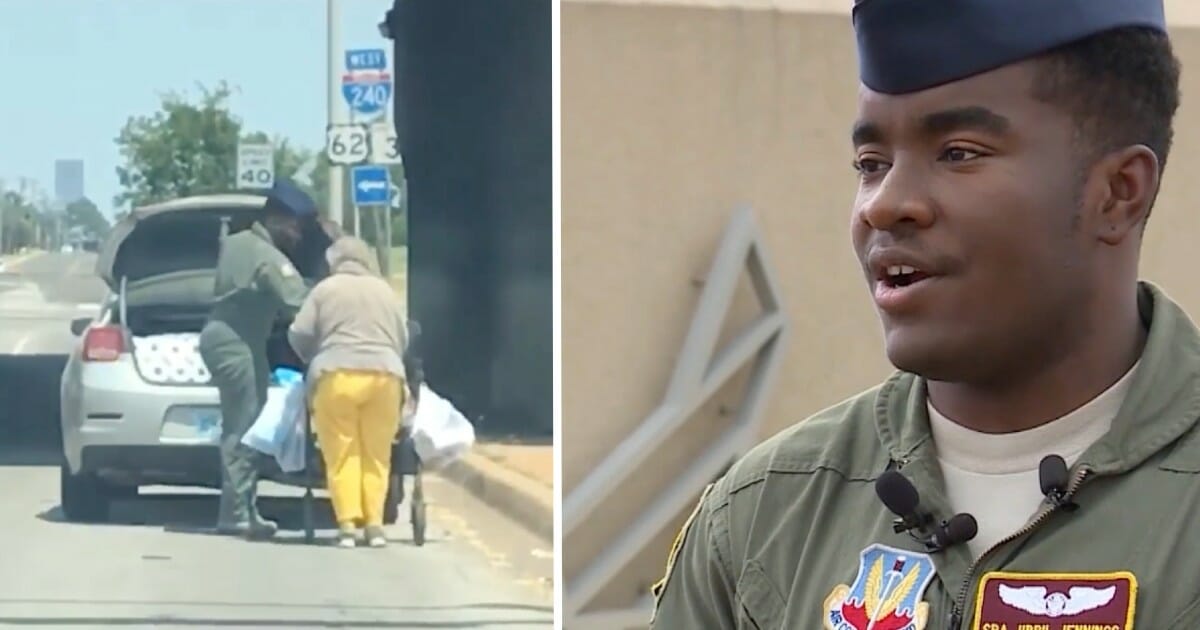 Senior Airman Jibril Jennings was driving down a road near Oklahoma City when he noticed a number of drivers swerving to avoid something in the road.

As he approached the road hazard, he realized the drivers were moving out of the way to avoid a woman who was walking with bags of groceries.

As Jibril helped the woman, identified as Janice Hall, load bag after bag into his car’s trunk, a woman recorded the act of kindness.

Amber Roy witnessed the moment and uploaded a clip on Facebook.

While Amber wrote that she hoped the video would go viral to show that there are good people in the world, Jibril said he didn’t see himself as a hero.

“There was a human being in the middle of the road that obviously needed help, and everyone was just driving past,” he told KFOR. “I don’t think this is a hero’s moment. I think this is something anybody should be able to do. If this qualifies for a hero, anybody could be a hero.”

Janice reminded Jibril of his grandmother.

Jibril drove Janice to her home, and on their way the two became fast friends.

“I really appreciated it and he was such a good man and you just don’t find people like that every day,” she told KOCO.

According to reports, Jibril recruited fellow airmen to help repair a ramp at Janice’s home.

Looks like this is just the beginning to a lifelong friendship!

I hope other takes Jibril’s words to heart and realize it doesn’t take anything special to be a hero.

Share this to thank Jibril for his act of kindness and to inspire others.