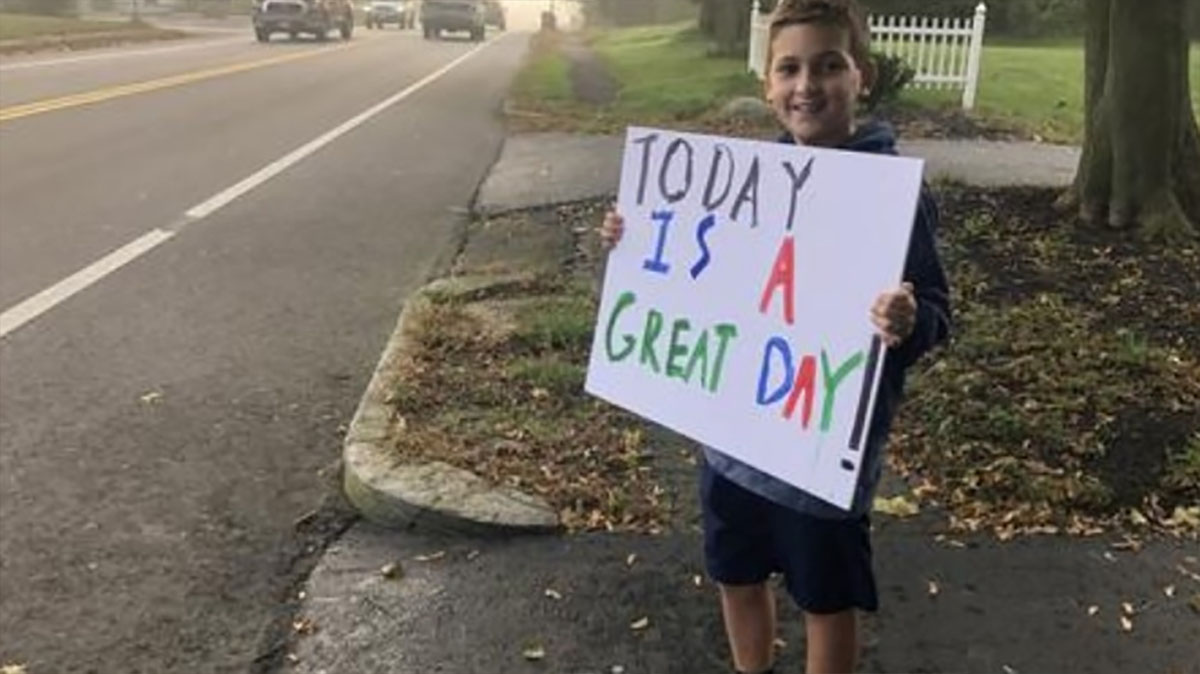 Michael Richardson is a 10-year-old boy excited to return to in-person school.

The Swansea, Massachusetts, youngster is usually dressed and ready for school long before he has to get on the bus so crams all kinds of activities in before he has to make his journey to school.

Both of his parents are teachers and have to leave for work early so the task of making sure Michael gets off to school okay is left with his grandparents or a neighbor.

Michael lives along a busy route in his town so his grandparents make sure he’s safe before boarding the bus.

“When my grandparents are here, I usually get up here dressed. I put gel in my hair, then when they come, me and my grandpa play cards. We have breakfast and then just chill and go out to the bus,” Michael told NBC affiliate WJAR News.

“Sometimes I play basketball and recently I started dancing.”

While dancing along the busy route his mom Kelley would get texts about her son’s entertaining moves which were helping to lift the mornings of commuters driving by.

“I would get text messages from his former principal and they would say, ‘Your son is not shy about living on the main road and people just kept saying it’,” mom Kelley said.

Michael decided to go one step further and make signs so he could spread positive messages to people driving by.

“My mom has a bunch of art stuff, so I asked her if I could use it. I drew one that said, ‘Have a good day.’ The next sign I made, it just said, ‘Smile’ with a smiley face. I come out probably like 35 minutes early,” said Michael.

“The past couple of days, I’ve been going out right after I eat breakfast. I do it to make people’s day good because it’s in the morning and then if you feel good at the morning, you’ll probably feel good for the rest of the day.”

His parents didn’t realize the work their son was doing to brighten everyone’s day until they saw a post in a community Facebook group.

“One night I was scrolling through Facebook and somebody said, ‘Thank you so much, I’m getting chills. Thank you so much to the kid who was standing at the end of his driveway who was holding up the sign. I really needed that today’,” said mom Kelley.

The positive feedback he received encouraged Michael to go outside and spread kindness even on days when he had no school.

“On Friday, we had no school and my sisters were home, so I was like, ‘Can you just take me outside?'” he said. “It feels good to make people smile and when they wave, I usually wave back while I’m holding the sign.”

Proud mom Kelley said her son was happy when he was making others happy.

“He really likes to make people happy and he does, he always wants to give you a hug or something like that. Any little bit of kindness is helpful, and it just makes my heart happy that he made somebody else’s day.”

Michael said he plans to continue to spread kindness Monday through Friday weather and situation depending.

“I’ll probably do it for a really long time until I get to the junior high or something cause then it’s very early in the morning you have to go,” he said.

To come up with such a selfless act which helps brighten people’s mornings at 10 years old is inspirational. I hope he continues to do what he loves best – making people happy.