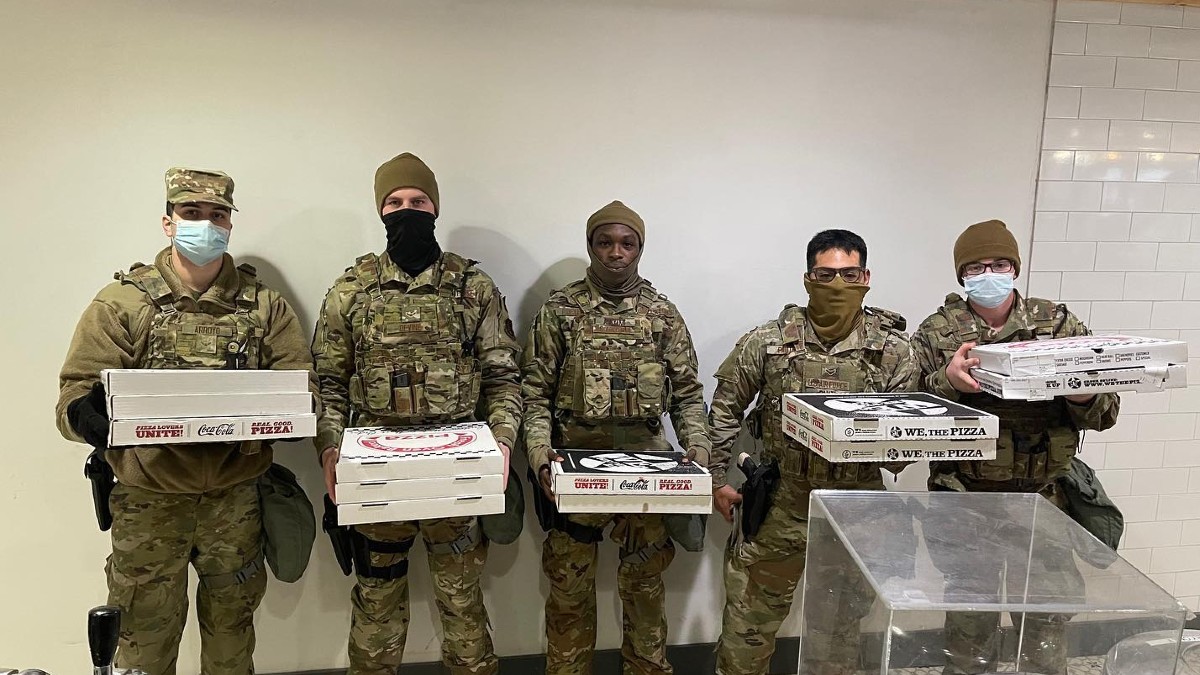 Following the storming of the Capitol Building on January 6, security has been drastically increased leading up to the inauguration.

The increase in security means streets that are typically full of activity with D.C. residents and tourists alike are now empty, and while in the grand scheme of things it’s for the better, it’s also hurting local businesses.

But at least one restaurant owner is trying to make the best of an already tough situation.

Chef Spike Mendelson of We, The Pizza, a pizza shop in Washington D.C. said he got the idea to donate food to the National Guard troops standing watch over the city after he saw photos of them resting on the floor of the Capitol.

“In a way this is our way of showing our appreciation for them defending our democracy. On January 6th, we were very scared and very frightened about what was happening in and around the Capitol. And with everything this year, it’s been a little bit of a breath of fresh air for our industry to be able to come together and provide some delicious foods to the troops,” he told WJLA.

After word got out, donations started to pour in and more local restaurants jumped at the opportunity to thank the Guardsmen for protecting Washington D.C.

Chief Executive Officer Micheline Mendelsohn said that after two weeks, approximately 4,000 pizzas had been delivered to the troops.

“I think it’s kind of a nice way for us to say thank you,” she said.

So far 30 restaurants have banded together to feed the National Guard troops.

“I think it’s been so wonderful to call all of these friends that we know and even some we don’t to say, ‘Hey, do you want to help feed some people?'” Mendelsohn said.

“I feel that these men and women give up their lives for us and for democracy,” she said. “They deserve to have a hot meal.”

Mendelsohn said the meals will continue to be provided as long as the troops as in D.C.

“I feel that these men and women give up their lives for us and for democracy,” Gina Chersevani, who has joined the fight by feeding the troops thousands of bagels, told WUSA 9. “They deserve to have a hot meal.”

Those who are interested in donating to help feed the National Guard in D.C. can do so on We, The Pizza’s website.

I think this is an amazing story and should be spread around so everyone knows about these restaurants’ acts of kindness. Once the troops leave, these establishments will need the support of their community, again, and we need to be there to support them. Let’s remember their names.