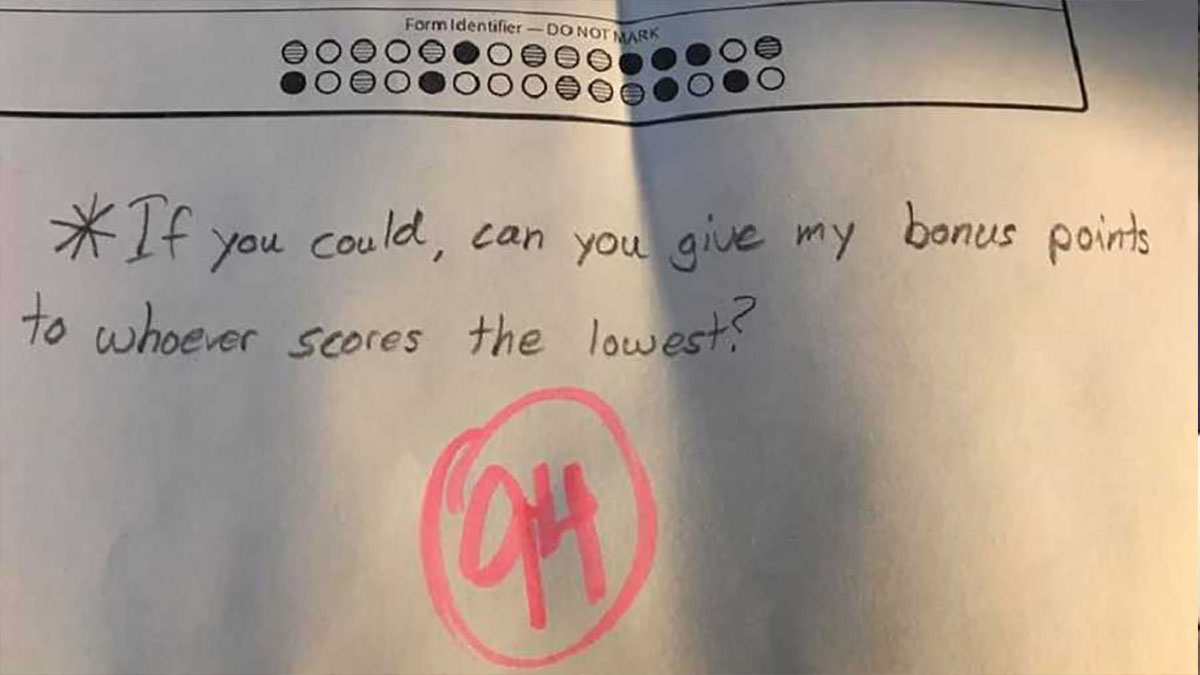 Testing seems relentless when you’re at school; the build-up, the exhaustion after, and then worrying about the result make the classroom a high-pressure environment.

But one A-grade student decided he was going to share his success with a student that found testing more challenging.

Teacher Winston Lee couldn’t believe it when he collected the papers for his class’s end-of-year exams and noticed a note on the bottom of one of the papers.

The Kentucky teacher at Letcher County Central High School had just set an exam about World War II in his 11th-grade history class and was collecting the papers when he noticed an asterisk with a small note toward the bottom of one exam.

It read, “If you could, can you give my bonus points to whoever scores the lowest?”

Lee said he was “taken aback” by his student’s request, shocked at such generosity when most students need every point they can get.

“He wanted to give up what he had earned so blindly,” Lee said, as per NBC-affiliated television station Wesh.

“I took it as a really compassionate, loving and kind act from a young person that most people would consider rare.”

Lee was so impressed by the student’s kind gesture that he posted a picture of the paper on his Facebook page in the hope of inspiring others.

His post quickly went viral and received many comments praising the student.

Lee explained how “one of my guys” received an extra five points on the exam after doing well in the previous day’s review game. The straight-A student ended up scoring a 94 on the exam, and the points he gave away allowed his classmate to go from a failing to a passing grade.

But some did question whether giving a student who wouldn’t have passed that free leg up was helpful but the teacher was quick to point out that he has no regrets, and people “overthought” what took place.

“I tried to not let any of the negative comments affect any of the positivity that was coming from it,” said Lee. “I just wanted to honor what this student had asked for and felt he earned his right to give his points away because it was such an amazing gesture.”

He said he hopes his student’s amazing act of kindness could inspire people’s actions outside of the classroom.

“Never in my teaching experience have I heard of a student willingly give away something they had earned to allow an extra opportunity for someone else,” Lee said. “So, the ultimate message is to take from his example and pay it forward.”

What this student did was such a selfless act; I’ve never heard of anyone doing something like this before.

Please share so more people can be inspired to pay it forward just like this wonderful student.