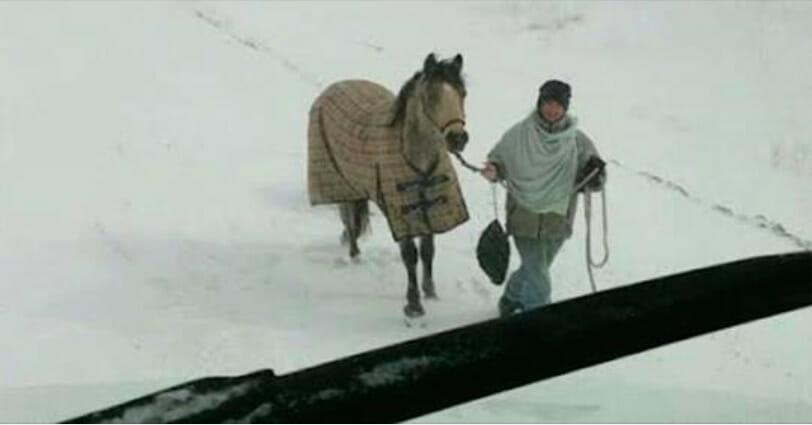 Snowstorms are nothing unusual in many parts of Canada. Snow often rapidly accumulates, making roads hazardous and very slippery.

One such vicious storm recently hit 18-year-old Eileen Eagle Bear’s hometown in Manitoba. Late at night, the teen and her mom were tuned into local road cameras in their area when they noticed something unusual.

A semi-truck, with a driver inside, sat alone, completely stranded on the interstate. No other drivers or cars were in sight.

That’s when the brave teen made an unlikely — but incredibly human decision.

Eileen saw that the truck driver was located just about 3 miles from her home. She felt concerned for the trapped driver, even though he was a complete stranger.

So the brave teen pledged to herself that if the truck would still be there come morning she would do the right thing: she would go out and help him.

Rider in a Storm

First thing the next morning, Eileen checked back into the road cams — and  saw that the stranger was still there. She immediately stuck to her plan. She prepared a thermos of hot coffee, then went out and beckoned her beloved horse, Mr. Smudge, a Welsh Arabian cross.

The two then set out into the brutal cold storm and began a risky, 3-mile journey towards the stranded driver.

“[Mr. Smudge] was great. But I had to get off and walk about half of the way, because the wind was too strong,” Eileen told CBC.

“I had a lot of faith in my horse, that he would keep me safe. He’s the calmest horse I have, he’s just super,” Eileen adds.

Eileen luckily found the driver, huddled in his truck and asleep after what must have been a terribly cold night. When the driver saw Eileen and Mr. Smudge standing by his truck, he was clearly surprised. Thankfully he fared relatively well.

“He was doing ok,” Eileen said. “He still had lots of diesel in his truck. He was still warm, but he was running out of food.”

So Eileen made a further promise. She would return home — then bring the very grateful driver more coffee and a warm meal later that same day.

When asked about her motives behind her deed, Eileen simply says: “The world needs more kindness.”

What a brave teen and wonderful act of kindness! Please share this story if you agree Eileen — and Mr. Smudge of course — deserve to be recognized for their compassion.