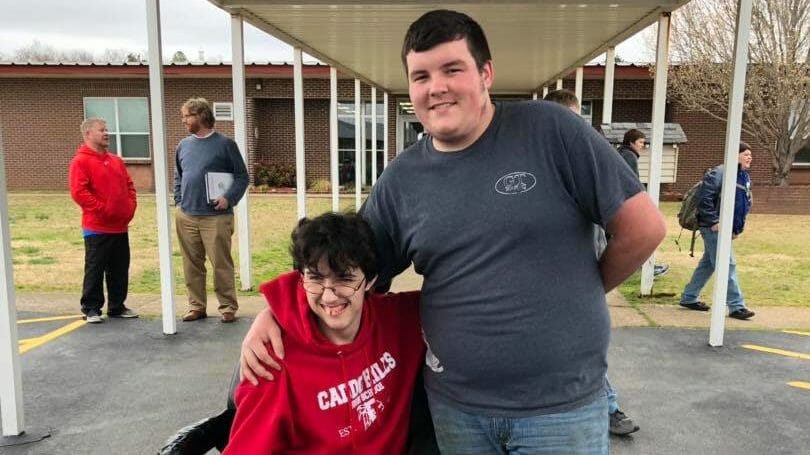 High school can be a difficult time for many. Teens don’t always get along well with their peers — we often hear news stories about bullying and students struggling to fit in.

But sometimes, we see the bright side of things, news about young people doing the right thing and being kind to their classmates… like one teen who worked hard for a remarkable act of generosity for his best friend.

When Brandon Qualls was a student at Caddo Hills High School in Norman, Arkansas, he struggled to get around the hallways. Brandon relies on a wheelchair to get around, and used a manual wheelchair, requiring him to push himself around the school.

“My arms would get really tired and I would have to stop and take rests,” Brandon told KTHV.

But his classmate and good friend Tanner Wilson couldn’t stand to see his friend struggle to get around, and became determined to help him out… by buying him a motorized wheelchair.

However, it wouldn’t be easy. Electric wheelchairs are expensive, and it took Tanner two years to be able to afford one, saving up his own money by working a part-time job at a mechanic shop, according to CNN.

“For the past three years I’ve wanted to get him one and I mean, I’ve been trying,” he told KARK.

But earlier this year, when the two teens were in the middle of their senior year of high school, he was finally able to purchase the motorized chair… and set up the most amazing surprise for his friend.

While Brandon was in class, Tanner came in with the chair, leaving him speechless.

“They came in and my face just blew up… crying everywhere… just like ‘Wow, can’t believe he did that for me!’” Brandon recalled to KTHV.

Having the new chair made life much easier for Brandon. “It’s awesome,” he said. “I may hit a few doors but it’s worth it!”

He’s going so fast that his teacher, Ginger Wray, even made a flame design for the new chair.

But doing the good deed also made a big difference for Tanner. “[He’s] had some bad experiences over the last year, so him being able to help somebody else has really brought him out — being able to know that he made a difference,” his mother Colleen Carmack told CNN.

“And I can see a difference in him — like wanting to get out and do more.”

“There’s many people out here that have troubles and need a little bit of help,” Tanner told KTHV. “Sometimes they can’t do it for themselves.”

Tanner is often asked if it was worth all that hard work and saving money, but the teen doesn’t give it a second thought.

What an inspiring story! Let’s thank this teen for helping out his friend and showing there’s still good in this world!