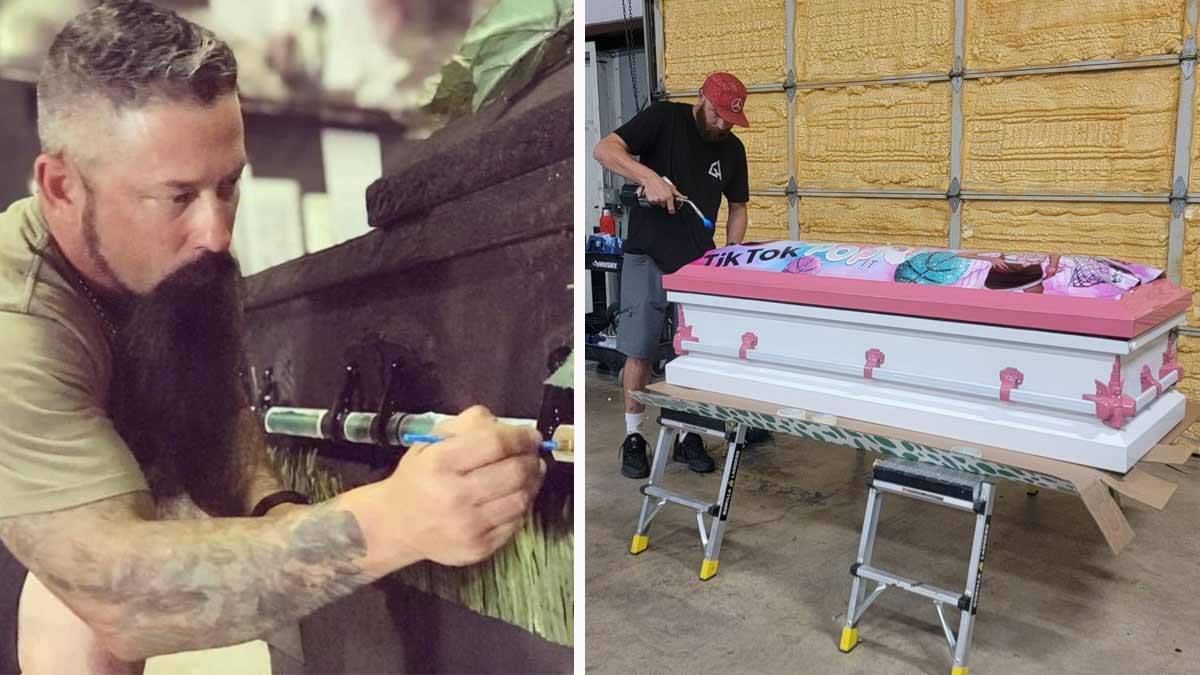 Following the horrific massacre at Robb Elementary School in Uvalde, Texas, countless people from around the country have stepped up to offer assistance to a community devastated by everyone’s worst nightmare.

While some have donated money and others have offered their prayers, one man has given his services to help the parents of the 19 children who were killed begin to heal.

Just one day after the school shooting, Trey Ganem, a custom casket maker, met with the victims’ families and began planning how to honor the young victims with their own one-of-a-kind caskets.

“I’m known for helping in, you know, the tragedies,” Ganem told NewsNation.

Ganem started working in the casket business around 2011 after a career in the custom car industry. About six years ago his son Billy joined the business as well, and since then the two have made countless custom caskets for families with Ganem’s company SoulShine Industries.

“They tell me about their loved one, and they tell me special specific things, and they light up when they’re talking to me,” he said.

“We’re creating the last thing that the parents can ever do for their child. And we’re making it with passion and purpose. We put all of our heart and soul into this thing.”

So immediately following the shooting, people began reaching out to the Texas-based casket maker. Ganem already knew it was going to be a gigantic task for the small town to memorialize 21 victims, but when he realized 19 were children it became even more difficult.

In order to make sure he had the right number of smaller caskets, he had to order directly from the manufacturer, who was based in Georgia. The manufacturer worked for 20 hours straight before one of Ganem’s friends made the 26-hour drive from Edna, Texas to Griffin, Georgia and back again.

Then it was up to Ganem and his son to paint the caskets in a way that represented each child.

“She would tell me that she needed glue for school because she had a big ole project to do, and the glue would be to make slime,” Sandra Torres, Eliahna Torres’ mother, told BuzzFeed News. “She drove us crazy with the TikTok.”

So it was only fitting that Eliahna’s casket was decorated with llamas, the TikTok symbol, and a splash of slime that also symbolized her love of softball.

“We did one with a dinosaur holding a flashlight and a pickle. And when the families are telling us, we’re like, ‘Wait, did you just tell me of a flashlight, dinosaur and a pickle?’ and they giggle, but for whatever reason, it was very special to them,” Ganem told to NBC Dallas-Fort Worth.

Ganem and his team were able to deliver 19 custom caskets to the families in three days. Each casket was provided free of cost.

“We’re here to try to make a hard time a little easier,” Billy told BuzzFeed News. “There’s nothing we can really ever do to make it easier, but that’s our goal: to help the families … start their grieving and their healing and just try to make something special for them.”

Ganem and his son have also provided custom caskets for previous mass shootings, including Sutherland Springs Church and Las Vegas.

It still breaks my heart that so many people were killed in such a short amount of time. I cannot even begin to imagine the amount of grief the small town of Uvalde is dealing with.

I hope these custom caskets give loved ones some comfort.