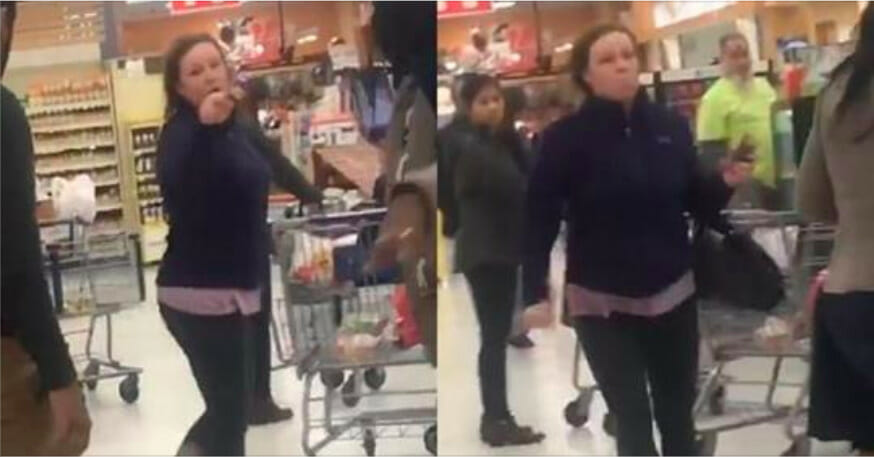 There is simply no excuse for racism — no matter what shape or form it exposes itself in. Some forms of racism are, however, more blatant than others — and for that reason, shocking.

This incident is one such example.

A woman unleashed a furious rant against an African American family while shopping at a ShopRite in East Haven, Connecticut. It is unclear what launched the attack — but what’s certain is there is simply no excuse for it.

The woman, Corinne Terrone, hammered the family with insults, including the expletive ‘n*gger’ repeatedly. But perhaps most shockingly is that her two young children are present, and appear clearly distressed.

It later emerged that the woman, Corinne Terrone, worked at the Hamden School district.

A video of the attack was later posted to Twitter by Talbert Swan, a bishop from Massachusetts.

“In this week’s episode of Racist Wypipo Gone Wild: Corinne Terrone, an employee with the Board of [Education] in Hamden, Connecticut, spit and repeatedly called a black man ‘n*gger’ at a ShopRite supermarket in East Haven, CT. This is America,” he captioned.

The term ‘wypipo’ is slang for ‘white people.’

The video reveals a white woman go on a shocking rant against a black customer in the middle of the supermarket. As she angrily shouts expletives at the man, other shoppers watch in shock. No one appears to get overly involved.

The woman can be seen holding up her cell phone, appearing to be recording a video of the situation.

Naturally, many have been outraged at the woman’s blatant racism.

“This trash can is on the board of education?” one Twitter user wrote. “I’d be at the board [on] Monday morning calling for her resignation immediately! This is what they think they can get away with now. If that man had slapped her straight, he would have been [in the] wrong, smh.”

What is your definition of a thug?? because you can't base it off looks ~ mitchie! ? (@itsxmitchie)

“The irony is she’s screaming at him to not speak to her like that in front of her children, but her words are atrocious!” another user wrote. “She should’ve been fired and arrested for at the very least spitting at him.”

“So true of many white people. I want to see it. I’m grateful for all the people taping these interactions and police brutality. It’s a blind spot I had and I’m so grateful to have it eradicated. Unlearning racism #Whities – it takes our lifetime apparently,” wrote another.

The Hamden School district has since terminated Corrine’s employment.

Racism is never acceptable. Share if you agree and are glad this woman got what she deserved for her despicable behavior.