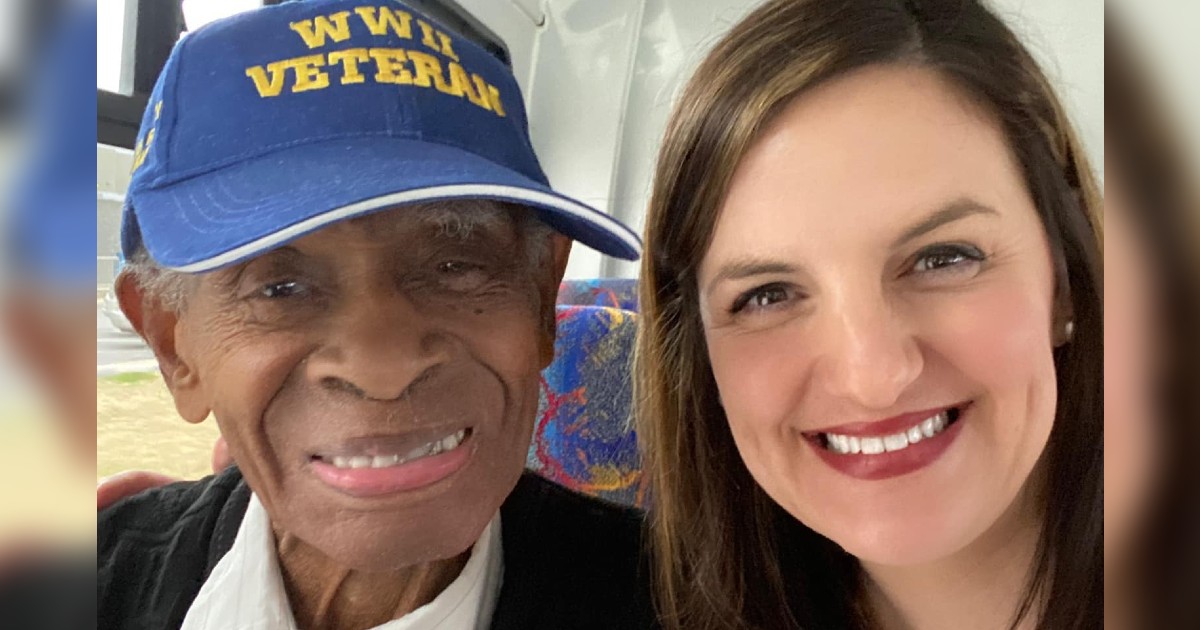 On December 20, 2018, Brooke O’Briant received a call about an elderly gentleman who needed some assistance. As a marketer for an assisted living facility, she answered the call and paid him a visit.

“It was a situation I knew I wanted to do everything in my power to get him out of.”

That day not only changed O’Briant’s life, but it also changed the man’s life.

Nathaniel Hudson, a WWII veteran, had been living in a “tiny and run down” apartment. He hadn’t had contact with his family in more than 20 years, but he was a loving man who needed a friend.

O’Briant took Hudson on a tour of the assisted living facility and he fell in love.

It took a few months, but eventually Hudson was able to move into the assisted living facility.

“He was so excited!” she shared with Love What Matters.

For the next year, O’Briant and Hudson spent a lot of time together. O’Briant made sure Hudson received his mail, went to his doctors’ appointments, and took care of every day things.

Hudson, who was extremely grateful, often referred to her as his “supervisor.”

But one day when Hudson joined O’Briant and her family at church, something he did on occasion, he called her his daughter.

“It melted my heart,” she wrote.

Unfortunately, Hudson’s health began to decline and he was diagnosed with cancer.

During a hospital stay, since he could no longer receive the care he needed at the assisted living facility, his nurses asked him about nursing homes and end of life care.

He told him, “I’m not making any decisions without Brooke.”

Hudson made O’Briant his power of attorney, which O’Briant was both humbled and honored to accept.

“Brooke is my everything.”

O’Briant learned that during his final moments the WWII veteran sang “Amazing Grace” as loud as he could.

“I think he knew he was about to go home to Heaven,” she shared.

“I sure will miss my precious buddy, but I will see him again. What a day that will be!”

After his death, she started a GoFundMe to help pay for the expenses not covered by the VA or national cemetery. More than $5,500 was raised, more than enough to cover the expenses. Anything extra was to be used for the memorial service, which was to be held once groups were allowed to gather again, and if there was still leftover it would be donated to charity.

Rest in peace, Nathaniel Hudson. And thank you Brooke for being so kind to a man who had no one during his final years.